The Creative X-Fi Style is priced decently at Rs. 6,999. This is around Rs. 1,000 - 1,500 cheaper than the iPod Nano 5G. But for a great experience you will have to invest some money in a decent pair of earphones as the bundled in earphones just do not deliver the goods. That may bring the overall pricing to the iPod nano 5G levels. X-Fi Style does have some flaws, but it still is a good product and we would definitely recommend this over the Zen X-Fi 2 touchscreen PMP.

Creative’s Zen X-Fi line of portable media players have been around for quite a while. We are all familiar with what to expect in these players. Sometime back we had tested the Creative Zen X-Fi 2 touchscreen PMP. That was a complete letdown on the user experience front thanks to the unresponsive resistive touchscreen. So does this newest non touch PMP deliver the goods? Lets check out the Zen X-Fi Style. 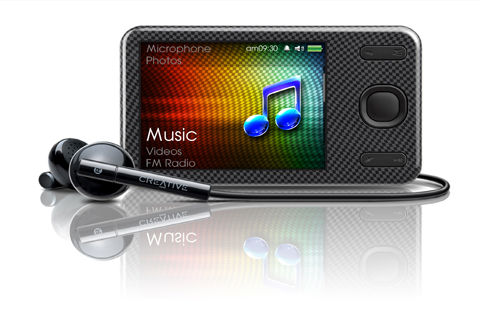 Body
The Zen X-Fi Style being a non touchscreen PMP can be assumed to be a successor to the Zen MX or the Zen Style 300 as it has the similar aesthetics in terms of screen and buttons. We got the compact 8GB model which has a glossy black and grey chequered top portion contrasted by a solid white plastic rear finish. It is available in black, white and red bodies in sizes 8GB, 16GB and 32GB. X-Fi Style is rectangular in shape and has rounded edges with a matte finished rear portion which gives it a good grip. The media player has a 2.4 inch TFT screen displaying 262K colours. The player has a horizontal orientation with the buttons placed on the right hand side of the top face.
Just like its predecessors, the X-Fi Style also has nine operational buttons : a central four way nav pad, dual - functional button above and below the nav pad. The nav pad has a slightly raised edge, which is pricky if used continuously and since the buttons are all plastic, there is no cushioning either which could have been provided by say rubber based buttons.
The PMP has a 3.5mm audio jack on the right hand edge below which is the micro-USB port. On the topop edge is the hold/power button with a microphone receiver in the centre of the top edge. The reset button is hidden on the lower edge. A small speaker section is present on the rear side.

Interface
For someone familiar with Creative’s media players, the interface will not be something they haven’t seen before. It has the same user interface that is seen in Zen X-Fi 2, Zen MX, Zen Style 300 etc. The home screen has menus stacked on top of each other. As you go up and down on the nav pad, the menu expands alongwith an icon on the right hand side. Very self explanatory and easy to navigate.
Similar to the Zen X-Fi 2, the X-Fi Style also has an RSS reader, although you need to connect to a system connected to the internet and manually add feeds in the RSS Synchroniser which allows you the option to add either just the headline or the complete story.
Each menu has some sub menus which display when you click on the menu. For instance clicking on the Music icon, you will get a dropdown with options like Now Playing, Artists, Album, Genre etc. Wallpaper can be customised and you can choose from around six themes. There is an option to rate the songs in the Music menu.

Performance
Pink Floyd’s Time was quite good during the instrumental intro - specially the high pitched sounds of the alarms ringing - but the separation was not that impressive when the vocal portions come along. Also at higher volumes one can hear mild distortion. U2’s Where the streets have no name sounded good with decent separation between the vocals and musical instruments. Highs in Therion’s O Fortuna  were not at all good. There was definite clipping of higher frequencies.
The player is very responsive in the mid-frequency range. Bass is quite poor in most tracks. Does this mean the player is bad? I beg to differ. The poor listening experience has got more to do with the ordinary bundled in earphones. I tested the same test tracks on Sony EX earphones, and experience was quite impressive. X-Fi Style is capable of producing good quality sound, but you need the right earphones. I would not recommend the bundled in ear phones. It is wise to invest in a decent set of earphones to get the most out of this PMP. The proprietary X-Fi Crystalliser claims to enhance sound quality, but frankly I did not notice an improved difference. This in my opinion is not really a must have feature as you can listen to your music well even with the X-Fi deactivated.
The video viewing experience was decent. Viewing angles aren’t much so beware. The colour clarity was good but contrast is strictly OK. It supports limited video formats and there is no way to know if the file being transferred on the player (when connected to the PC) will be supported or not. So you might end up dumping all your video files and realise that most of them don’t even show up on the video menu.
The nav pad edge is annoying if you have to use is continuously - like say reading a full article in the RSS menu. We would rather you avoid reading full articles, on the media player for two reasons. The limited screen real estate and larger font size will make you want to constantly press the nav pad in the down direction. This can lead to sore thumb. A nice touch in the navigation is the option to scroll by alphabets which makes navigation faster while looking for a particular file.
Bundled in ear phones are quite plain and do not do justice to the sound output. We are saying this after replacing the bundled in earphones with Sony EX earphones. The difference in sound quality is quite evident as you get a better response for the lower frequencies.
You can browse through the other menus with Music on in the background, but cannot do the same for FM radio which I found really strange.
The micro USB to USB connector should have been lengthier that what is bundled in. You have to leave your media player hanging.


Final Verdict
The Creative X-Fi Style is priced decently at Rs. 6,999. This is around Rs. 1,000 - 1,500 cheaper than the iPod Nano 5G. But for a great experience you will have to invest some money in a decent pair of earphones as the bundled in earphones just do not deliver the goods. That may bring the overall pricing to the iPod nano 5G levels. X-Fi Style does have some flaws, but it still is a good product and we would definitely recommend this over the Zen X-Fi 2 touchscreen PMP.