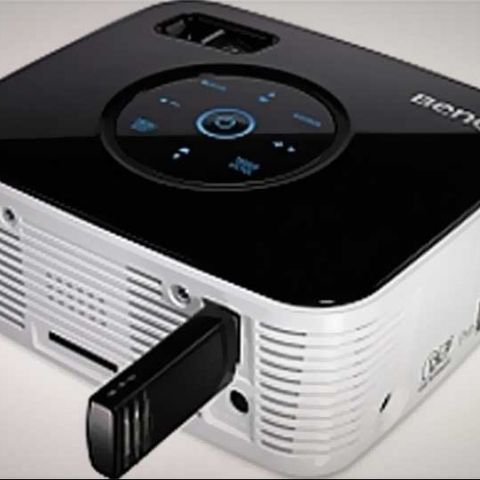 For a portable projector, the BenQ Joybee GP2 is an excellent package. We liked the overall performance, the USB port for direct media playback and the additional dock for an iPhone or iPod Touch. The fact that you can use it off battery power means it is truly a portable projector. Well, you do play a bit extra for the portability bit, but then again, we think it is worth a consideration. Not meant for the buffs or anyone who is very finicky about quality, but should appeal to someone who may be getting this as their first projector experience.

Tiny projectors are not all about offering the projector experience on a budget. In fact, they have grown well beyond that, into something that is coming close to being the all-rounder device in the home theater setup. And they do work well in most homes where space is at a premium.

Look & Feel
There are a whole bunch of design elements to the Joybee GP2. When looked at it from front on, you clearly see that the projector is wider at the top, and slims down towards the bottom. The black and white colour combination looks good, but the white runs a serious risk of getting dirty very quickly. The top panel has a glossy black finish, and this is where a whole bunch of touch based controls are placed – power, next, back, return, menu etc. The sophisticated blue backlighting of these keys looks very classy. However, the glossy bit is a negative – dust will be very much visible, and will be susceptible to scratches, even with regular usage.

On the right side of the lens is the focus dial. Turn the device around, and there is the lone SD card slot. Nice thoughtful addition, we say. Next side is where the business end of the input ports is. The interesting bits are the mini HDMI port and the USB slot. While we are a bit confused about why the mini HDMI port, because it just means you need another adapter to make an HDMI cable work with this, or just get a new cable! Why? However, the USB port is something lot of people will appreciate. This allows you to connect a USB drive to it, and the Joybee GP2 can pretty much act like a USB device.

Overall, the build quality is nice. It is surprisingly light, and feels well put together.

Cannot understand the fascination with glossy black finish on gadgets

Features & Performance
With the rated brightness of 200 ANSI lumens, you will have to use the Joybee GP2 in a pitch-dark room, and any bit of light seeping in will wash out the projected image. Once you have done that though, the performance of this pocket -sized projector will impress. From a distance of about 3 feet from the wall, the projected image was around 65-inches.

This DLP projector can play back multimedia from various sources. First, we tried the conventional HDMI route, and hooked it up to a WD TV Live HD media player. Weirdly, the GP2 has a mini HDMI port, and that just means two things – either you buy a new cable with mini HDMI on one side and a full sided connector on the other, or manage a converter. Either ways, it is just some riff raff that the projector could have done without. The performance of HD video playback (1080p, in MKV and MP4 containers) was quite good. The sharpness was adequate, and the colours felt quite stable. Though, it did seem that red does take a slightly more visible role at certain times, for example, with skin tones. However, black levels were a tad disappointing, and that really impacts the dark areas of a scene. Fast motion scenes were handled better than a lot of more expensive projectors even, but there was visible judder some times. With SD content, the sharpness we had praised during HD playback seems to be a letdown. You can feel the complete lack of crispness, and the subsequent reduction in detail. Very satisfactory brightness levels for a traditional dark projector room.

The control cluster on the top panel, lit in classy blue

Second time around, we plugged in a 320GB portable HDD to the projector. Within 20 seconds, the entire video library was read and listed. Playback of MP4 and AVI formats didn’t raise any compatibility issues. Same seamless playback from the SD card slot! So much so that we were actually wondering if the WD Live sitting next to the BenQ projector was eyeing with a bit of disgust!

The iPod / iPhone dock is a value addition, but will appeal to anyone who uses a compatible iOS device. Plug in the device, and the on-screen menu opens up to the corresponding option.

Surprisingly, the built-in speakers pack quite a punch. Initially, we did not connect the projector to a home theater, and were surprised with the volume punch and clarity of dialogues. However, asking for bass thump as well would be asking for too much!

The combination of black and white does look good

One thing with the GP2 is that it heats up very quickly. Even though there are generous vents on almost all sides, the fans do become a tad noisy after about 20 minutes of usage. Using it in an AC environment is the only possible solution.

The GP2 also has the capability to allow playback on battery power, but we did not get the battery with the test unit. Unfortunately, despite repeated follow-ups, the battery pack could not be arranged for, and we would not be able to comment on the performance of that particular aspect.

Our Take
For a portable projector, the Joybee GP2 is an excellent package. We liked the overall performance, the USB port for direct media playback and the additional dock for an iPhone or iPod Touch. The fact that you can use it off battery power means it is truly a portable projector. Well, you do play a bit extra for the portability bit, but then again, we think it is worth a consideration. Not meant for the buffs or anyone who is very finicky about quality, but should appeal to someone who may be getting this as their first projector experience.

Cooling vents and speakers on one side

SD Card slot, with a nice cover for it
The front
The iPhone dock
The little dial to set the focus
When in standby mode, the power LED on the top panel keeps flashing at regular intervals