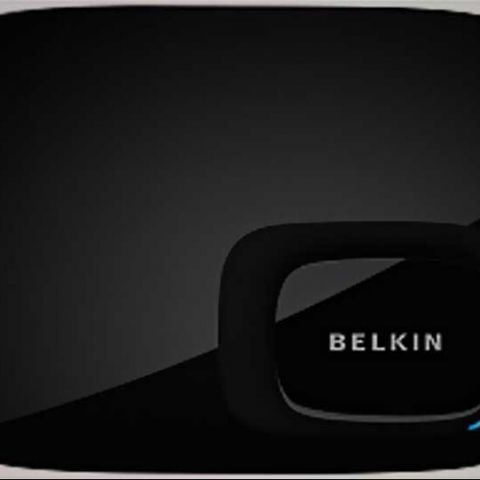 While the Belkin ScreenCast AV4 is a rather expensive way of keeping the cables out the line of sight, for what it offers, it does perform very well. As with anything wireless, there will be a certain amount of initial effort - placement, pairing, setting up etc., but once you are past the surprisingly simple setup bit, it is a smooth switch on and enjoy scenario. HD streaming is almost flawless, even in an environment that has some bit of radio interference from routers and cordless phones. The minimalistic modern looks are a bonus!

The idea behind this product is very simple: it allows you to wirelessly stream HD content from most HD sources to your HD capable television. As a result, the clutter of cables from various devices going into the TV is not in sight anymore. On paper, this seems like a very slick idea. But as with most things wireless, we will reserve our judgment till we actually see it in action.

Build & Design
The Belkin ScreenCast AV4 setup has multiple elements to it. First off is the pair of the transmitter and the receiver. The transmitter is where you connect a maximum of 4 HDMI inputs, and all inputs are on the back. It is a rather sleek device, which has the power point, a USB port for firmware upgrades and two separate keys for power on/off and pairing. You will only need the pairing button once initially, to set it up with the receiver. The top front of the transmitter has a rather simple look to it, except the little depression that features the power/pairing notification LED and the big Belkin logo. It has a matte black finish.

This is the very moden looking transmitter. Black colour gets a matte finish.jpg

The second piece in the Belkin ScreenCast AV4 cog is the receiver unit. This has a very similar look to the transmitter – flat top that has a slight slant downwards at the front. However, the same black colour finish has the glossy treatment. What is consistent throughout the entire package is the same black colour, albeit with slightly different final look – a good chunk of points for uniformity in terms of the colour. Once paired with the transmitter unit, it will receive the signals from whatever source is currently active there, and send that to the TV. Understandably, the receiver has a smaller footprint, since it just has to output the AV signal directly to the TV – via the HDMI out.

Contrast to the transmitter, but the same black colour gets a very glossy finish on the receiver.

Both the Belkin ScreenCast AV4 devices (transmitter and receiver) have a flat design, and look rather modern – something meant to look classy in the home entertainment setup. The receiver unit can also be hidden away behind the TV, and the transmitter is slim enough to share some space with the other devices on one of the shelves, and even sit on top of one of them, cooling vents permitting!

In the same Belkin ScreenCast AV4 package, you also get an IR blaster, something that will be useful if you want to hide away the gadgets from the line of sight. In that case, ordinarily, the remote would stop working, but this is where the blaster and its tentacles spread across the other devices will help you retain your composure!

Overall, both Belkin ScreenCast AV4 devices look very premium. One has an inexplicably glossy finish, while the other is more manageable with the matte finish. The dark finishes – black with differing degrees of shine, will comfortably blend in.

The very simple remote, you just cannot get confused with this. Compared to the size of a traditional smartphone gives you an idea of how compact it is.

Features & Specifications
The entire wireless connectivity between the two units is on the 5GHz band. There is no need to connect the two with any cables – well actually you cannot, even if you try! The transmitter has 4 HDMI inputs, and will support almost all devices that have the HDMI output. We tested with Tata Sky HD, a Blu-Ray player and an HD Media Player, and there were no issues setting it up and using it.

The one time pairing setup of the Belkin ScreenCast AV4 is quite simple. You connect all devices to the inputs on the transmitter, and provide the power to it. Similarly for the receiver, connect the HDMI out on the device to the HDMI input on the TV and power it up as well. One by one press the “pair” key on the back of these two devices. The blue LED on the front would now alternately blink between red and blue. The on-screen display will show the status of the pairing, and it takes exactly 3 seconds for the pairing to complete. Post that, every time you switch the entire setup on, the two will automatically connect.

The four HDMI inputs on the back of the transmitter unit.

For those of you who have certain devices out of sight, or might want to shift them now that there is a setup that lets you hide them, the included IR blaster will be very helpful. Much like the other blasters available in the market, you need to snake it along to the various gadgets, but not being RF, the placement of each IR transmitter will have to be perfect for the out of sight gadgets to work.

The remote is very basic, and very simple. You really cannot go wrong with it. There is the OK key for bringing up the menu, and finalizing the selection. The up and down arrow keys let you navigate between the on-screen menu. That’s it! This is the simplest remote we have ever seen!

The one HDMI out on the receiver, which will connect to the TV. The USB port is only for firmware updates, and will not work like on a traditional media player

Performance
As with most things wireless, connectivity always runs the risk of being interfered upon. The Belkin ScreenCast AV4 works on the 5GHz frequency, and in case you have some other wireless devices running on the same frequency within the same room, then there will be interference. However, if none of the other devices are getting in the way of the transmitter and the receiver, you are good to go. We streamed HD content via an HD media player, and the streaming quality was flawless. With the same content, even on a Wireless N router, most HD media players can only reproduce stuttering content. However, this one had absolutely no issues with a Full HD file with high bit-rate DTS audio being sent along. If you are using this for your home theater setup, TV, projector etc., this will work very well. the same smoothness was witnessed with 3D content, and there was absolutely no loss of depth or clarity – looked exactly as it would with the Blu-Ray player connected directly to the TV or via an AV Receiver. As long as the devices you have connected to it play back the content you wish to watch, the ScreenCast will not get in the way at all.

The bottom right of the little trench-depression on the device is where the status LED is. Rest is a very simple device, with no gaudy elements.

Having said that, we did notice a couple of issues with the Belkin ScreenCast AV4. The first is if you pause HD content for 5 minutes or more, you will see momentary (1 second and a bit) stutter upon resume. However, once that initial jitter is over, content is as smooth as before. However, we were a tad perplexed to find the audio completely dropping out during streaming, after we used the fast forward treatment on HD content. The only real solution is to pause it for 5 seconds and then resume. If that doesn’t work, stop the playback and restart again. If your media playback device supports content resume from last viewed position, select yes, and the audio will work normally.

The claimed operating range for wireless streaming to work on the Belkin ScreenCast AV4 is 30 metres, but that is more in case of a line of sight scenario. In a typical home where you’ll hardly find 30 metres straight without a wall or something blocking the way, this range does come down considerably. The moment there is any interference in the straight vision, in addition to the increasing distance between the transmitter and the receiver, you will see stuttering in content. Ideally, this solution is meant to work in the same room, and better still if your cordless phone and wireless router are in another room.

If you happen to have an audio receiver for a multi-speaker setup for the audio bit, the ScreenCast will not be able to help at all. Apart from passing through Audio and Video via the same HDMI cable wireless route, it will not output audio via either coaxial or optical sources. There are two alternatives for you. If your TV has optical audio out, you can use that to connect to the receiver and output audio via that. Alternatively, you can connect the source device’s HDMI oit into the ScreenCast transmitter for video, and output audio via optical or coaxial directly to the receiver.

Surprisingly, the transmitter doesn’t scan the HDMI inputs for an active video source. If you unplug or plug in a source, you will have to manually shift to that input. Switching between inputs does take about a couple of seconds.

Bottom Line
Apart from these two niggles that we encountered, the Belkin ScreenCast AV4 experience is rather seamless. The idea of letting you hide most devices and almost all the wires is appreciated, but there is no getting away from the fact that it is an expensive solution to buy. We have the clutter that usually comes as a part of the media centre cabinet filling up over a period of time. However, with this, you can effectively place the AV sources anywhere in the same room connected to the transmitter, with the receiver nicely hidden being the TV. For anyone who doesn’t know you are using a ScreenCast AV4, it could as well be Black Magic that is sending content to your HDTV!