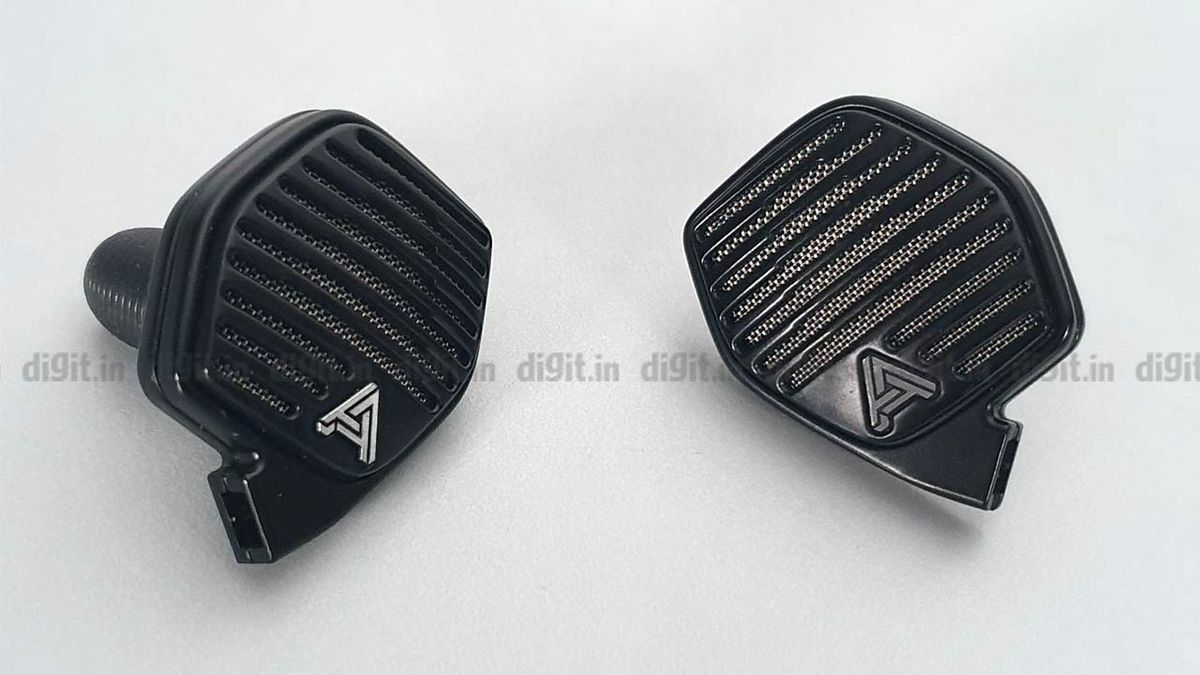 It’s rare to come across a pair of earphones that ticks an inordinate number of boxes of what you’d consider the perfect pair of headphones to be. The Audeze LCD-i3 gives users lifelike planar sound that has a beautiful airy quality, which coupled with the massive soundstage sounds, for the lack of a better word, epic. Add to this the fact that you can connect these headphones to iPhones via a lightning cable, 3.5mm jacks via a 3.5mm wired cable and wirelessly through Bluetooth, you’ve got an extremely versatile pair of earphones. The price is exorbitant, yes, but given the customisation options and stellar sound quality, you’re likely to feel that your money is spent well.

Audeze headphones have always been a favourite here at the Digit test lab and the new LCD-i3 cements our liking for this audiophile-grade brand even more. The Audeze LCD-i3 is a pair of open-back, planar-magnetic IEMs that borrow heavily in terms of design from the flagship Audeze LCD-i4 earphones, which are significantly costlier than the LCD-i3. They also mimic the iSINE range of Audeze products when it comes to low-impedance. As a company, Audeze nails the planar magnetic technology used in IEMs since they make the headphones open-back. Closed-shell IEMs with planar magnetic tech often tend to sound shrill between 3-5khz and Audeze avoids this due to their decision to make the LCDi-series open-back. The Audeze LCD-i3 is priced at Rs 79,990 and certainly mesmerised us with its sound which is why it ended up being the winner in the Best Performing Wired IEM segment in our annual Digit Zero1 awards. Let’s delve into these earphones further. 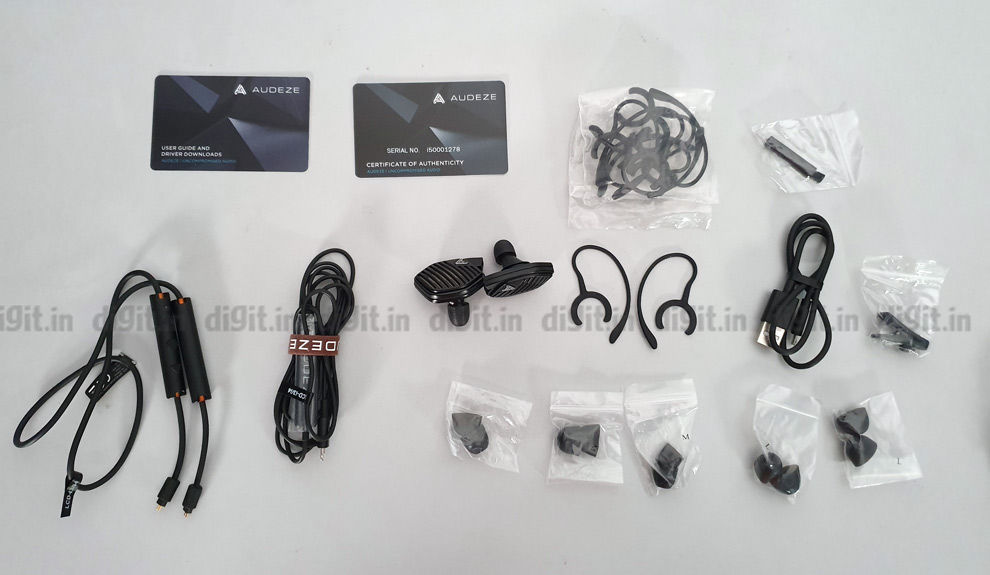 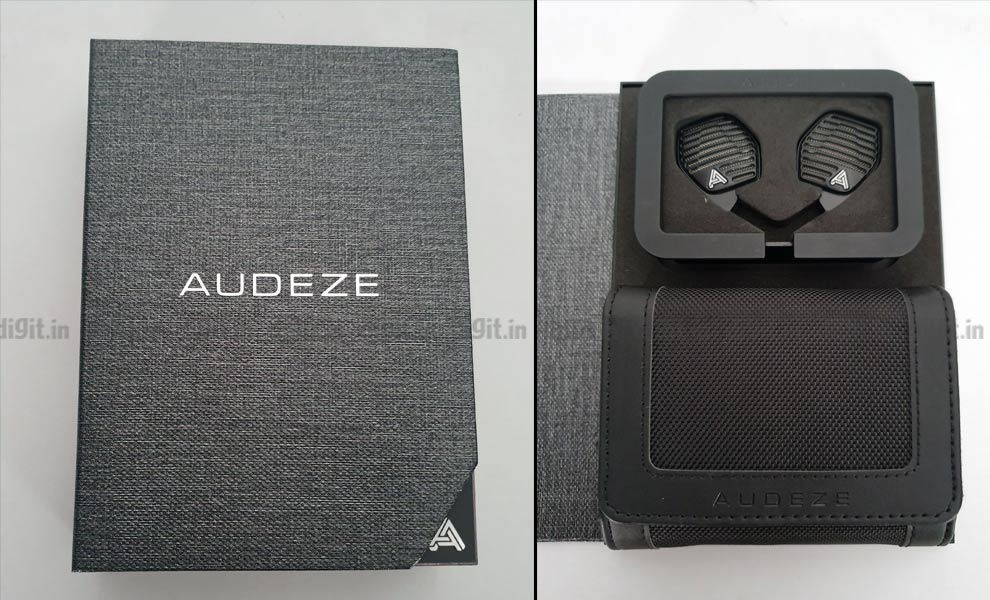 The Audeze LCD-i3 earphones, similar to the iSINE LX and iSINE20, come packaged in a hard plastic box that looks extremely premium due to its textured design. When unfolded, the earphones sit neatly in a dedicated cavity at the top of the box, while the bottom holds a carrying case with the plethora of goodies we mentioned above. 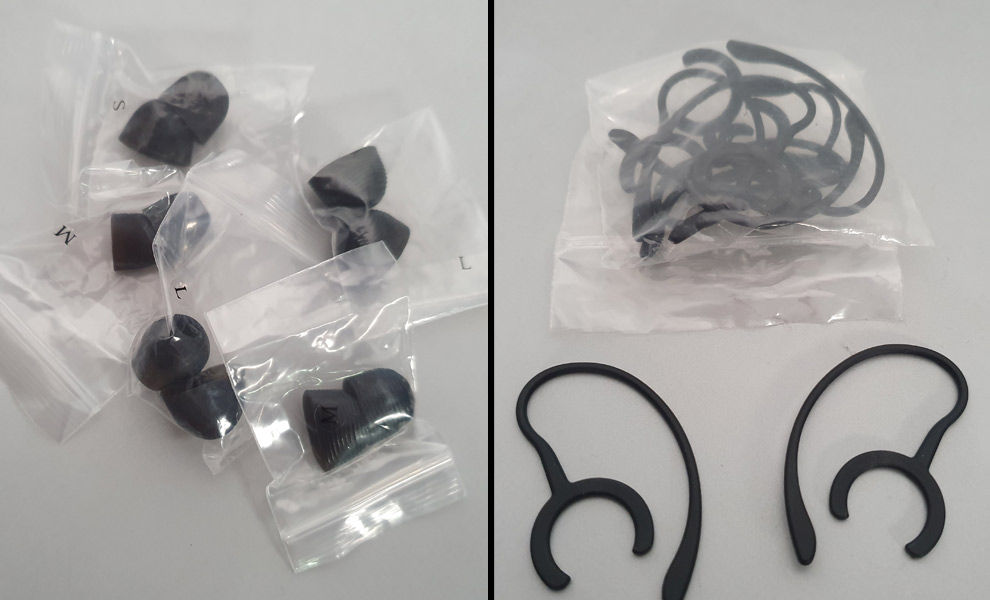 The wide array of angled ear hooks and eartips of different sizes ensure that you get a good fit. However, despite donning the right size of both, the hooks and eartips, we found the fit to be rather flimsy owing to the weight of these earphones. They felt moderately secure when we were sitting still in one place, but walking about would cause them to loosen and sometimes pop out. So, naturally, these earphones aren’t ideal to use during commuting or walking. Don’t even think about bringing these with you when jogging, or worse, gymming. 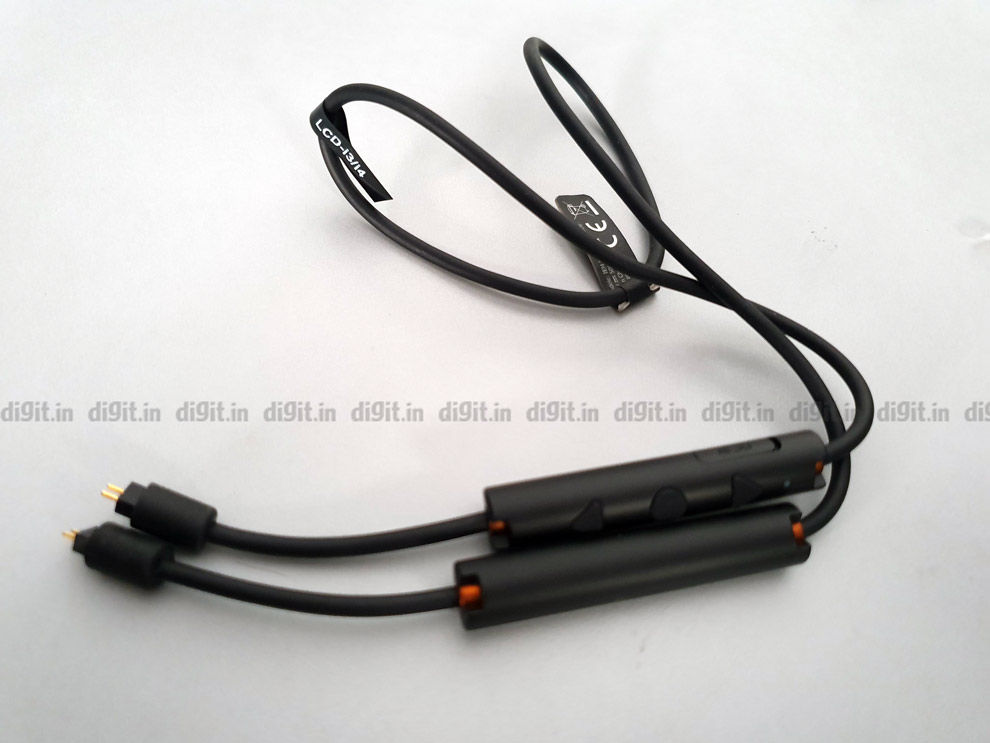 The multiple cables allow users to connect them to a wide number of devices easily since they can be used passively via the standard 3.5mm audio cable or the Lightning cable for iPhones, or you could simply connect the Bluetooth module and connect wirelessly. It’s great to have an array of choices, and the price feels more justified due to the variety of connectivity options. Nevertheless, we would have loved it even more if these cables were tangle-free, which is not an unreasonable ask at this price point. The cables come with a standard 2-pin connector at the other end to connect to the IEMs. 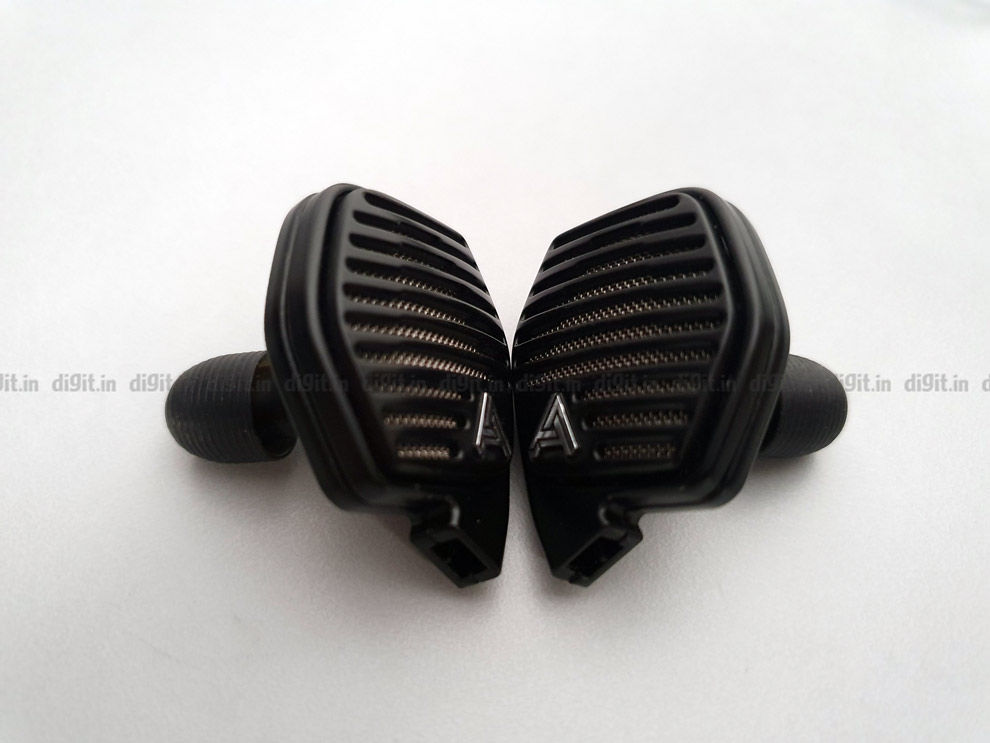 The Audeze LCD-i3, as mentioned above, as open-back earphones which basically means that sound does leak both in and out. While sound leaking outside the earphones is still at a manageable level when compared to several open-back headphones, the passive isolation is extremely poor and you will need to be in a relatively quiet area to listen to these efficiently. Office environments, commute in public trains and buses and in general, an outdoor environment are not ideal. The i3 sports a 30mm transducer which utilises a Neodymium N50 magnet. This magnet is housed inside a plastic shell with a semi-glossy finish. A silver aluminium mesh grill sits directly underneath this and the overall look is premium. The design is almost identical to the LCD-i4, while it weighs the same as the iSine 10. The plastic chassis is a good choice since a metal one would have deteriorated the comfort and fit even more. 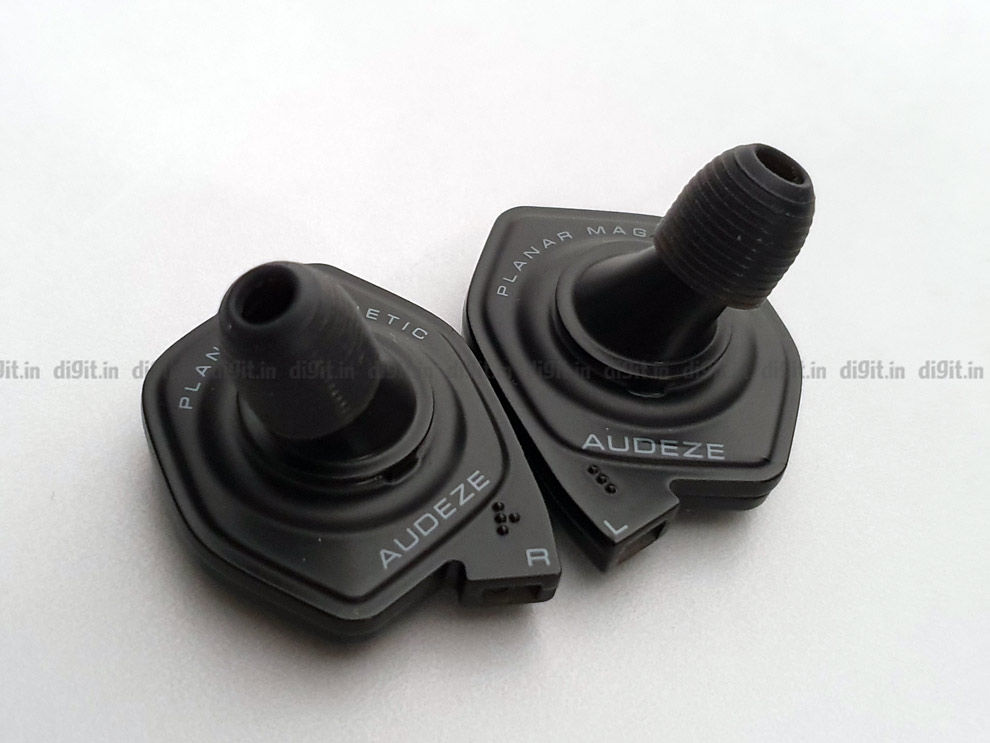 The nozzle which fits inside the ear is thicker, longer and bigger than traditional IEMs and while it feels rather lightweight in-hand, the weight in-ear is on the higher side when compared to other IEMs. For us, the comfort and fit were rather awkward, as aforementioned, but you may get a different result by using the eartips and hooks. Something we missed sorely was foam tips which we think should have been included at this exorbitant price point. The LCD-i3 juts out of the ear considerably and looks rather odd, but still premium nonetheless. 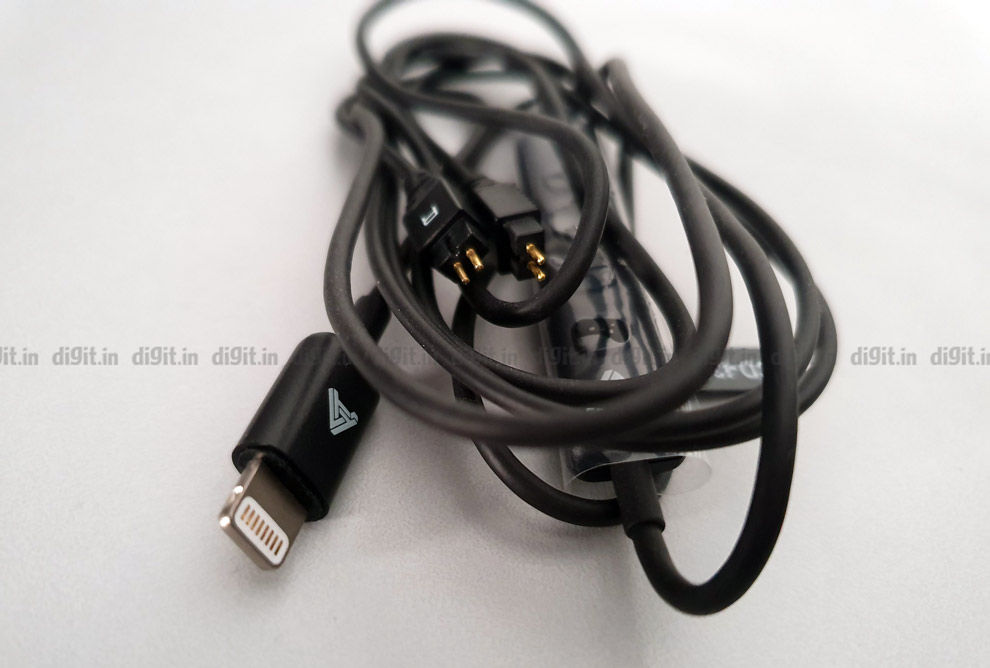 The lightning cable for iPhones included with the Audeze LCD-i3 has Audeze’s cypher tech which is basically its proprietary DSP. Its DAC converts at 24 bit and it is also compatible with the Audeze DSP app which lets users customise the EQ intricately. You can utilise Audeze’s app to access various premade DSP modes as well. The Lightning cable also has a microphone and in-line controller. The in-line controller allows users to pause/play tracks and control the volume as well. 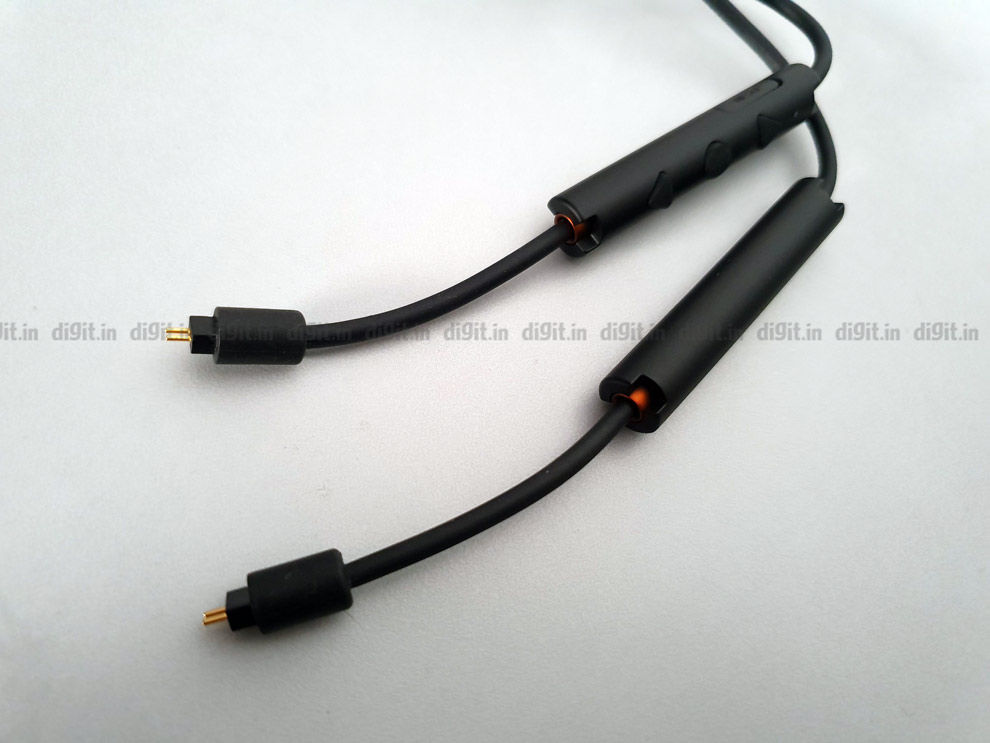 The Bluetooth module, sporting Bluetooth 5.0 standard, similarly comes with cypher tech and an in-line controller as well. This module supports hi-res audio codecs such as AptX and AptX HD and has a respectable 8-hour long battery life. We managed to squeeze out around 7 hours and 15 minutes at about 60 per cent volume, which isn’t too far off from the company claim. 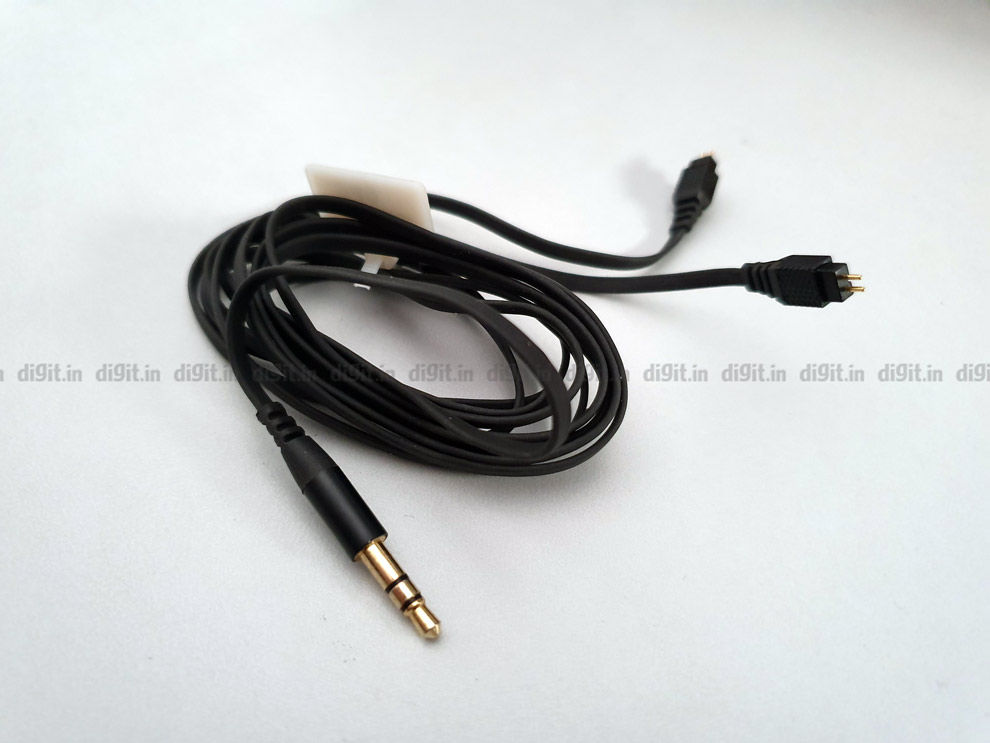 The analogue 3.5mm connector cable, however, does not include the DSP, so to get the most out of this device and listen to it the way Audeze intends you to, you will have to use an Apple device or the Bluetooth module. We evaluated the i3 with both the 3.5mm cable and the Bluetooth module in this review.

The Audeze LCD-i3 retrieves the detail in audio exceptionally well. The stock experience, without any of the intriguing levels of tweaking the cypher tech allows you, is flat and will please the most stringent audiophiles. Competitors such as the Campfire Andromeda and the RHA CL2 Planar have a tough time stacking up to the i3 when it comes to speed and drive, especially in the bass. The bass is tight, controlled and sufficiently punchy. Kick drums and bass guitars sound fantastic and the sound is never too jarring to the mids. The lows are extended but not over-extended and a boost in the region around 40kHz provides them with extra liveliness. The separation from the low mids is excellent.

The lower-mids are sometimes a bit too weighty for our liking and female vocals suffer slightly due to this. However, the rest of the frequency range in the mids sounds luscious and forward. They also offer a wealth of detail range. However, in certain Jazz tracks, the mids are a bit weak-sounding. The mids are by-far the weakest element of the Audeze LCD-i3 but they still manage to beat most IEMs out there, which is saying something. It is just not quite as commanding as the excellent reproduction of the lows and highs.

Speaking of the highs, the Audeze LCD-i3 excels here. They extend quite a bit but do not, at any point, sound sibilant or tinny and mostly sound luscious and full. The extended highs make the tracks significantly more dynamic, adding oomph to pop or rock tracks such as Something From Nothing by The Foo Fighters. When listening to Centuries by Fall Out Boy where most IEMs crack at high frequencies or at least sound unappealing, the Audeze LCD-i3 carries the notes with extreme precision without sounding harsh or peaky.

The soundstage, as expected from open-back earphones, is extremely spacious. The width is expansive and so is the height. Imaging is also excellent and on certain tracks such as AKFG’s Blue Train, you will feel a sense of closeness to the instruments which is not found on closed-back earphones. Being open-back has shattered the limitations IEMs usually stumble upon when it comes to the soundstage. The result is a remarkable airy quality which sounds ultra-realistic.

If budget is not an issue for you, the Audeze LCD-i3 are one of the best pair of IEMs you can find on the market today. If you’re an audiophile and mostly listen to music within the confines of your home or studio, these IEMs deliver life-like, balanced sound quality that brings out intricate details and nuances in tracks, unlike traditional BA IEMs. The planar magnetic tech coupled with the open-back design delivers airy, realistic sound which works brilliantly with almost all genres of music. Priced at Rs 79,900, these IEMs are certainly on the expensive side, but they are completely worth every rupee and then some.