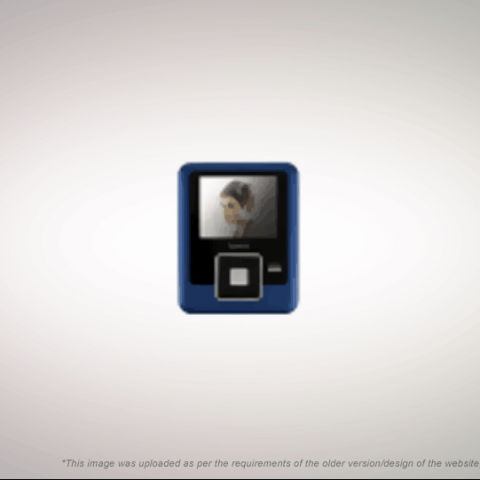 At Rs. 2,400 the Apacer AU824 is a little too light on performance and features to warrant approval, though it is the cheapest player we tested and many who want affordability will want to check it out.

A neat looking PMP with a garish and overdone mock chrome finish on the rear that made me go “ugh”! The front is neat though with the buttons resembling a cellphone layout, albeit much larger. There is a centre button for play/pause and four directional keys around it. A tiny menu button is also provided to the right of these buttons. The centre button is finished in matte-silver and this along with the chrome rim around the buttons adds some colour to an already colourful black and navy blue body. The centre button has a rubbery feedback. Build quality is good but it looks like everything was put together in a hurry especially considering the misalignment of the USB port. There’s a switch on the player that selects between playback and USB mode.

Surprisingly, for such a small screen, the video format support is extensive, especially compared to the Philips Aria. Quality of the display is so-so; brightness level is good. Music performance is a little better although we found the bass unfocussed and tending towards looseness, the SR 225 is known for clean bass and the fact that the bass seemed muddy is testament to this players’ performance, or rather the lack of it. Mid-range is also weak – definitely not its forte. The treble extends rather cleanly although is sharply rolled off and certain instruments and sounds that extend into the higher frequencies beyond the 8 KHz range. In fact some piano accompaniments around the 4 KHz mark also seemed to be missing – this is really part of the lower-range of treble and this is pretty unacceptable for a PMP of any sort, irrespective the price. At Rs. 2,400 the Apacer AU824 is a little too light on performance and features to warrant approval, though it is the cheapest player we tested and many who want affordability will want to check it out.