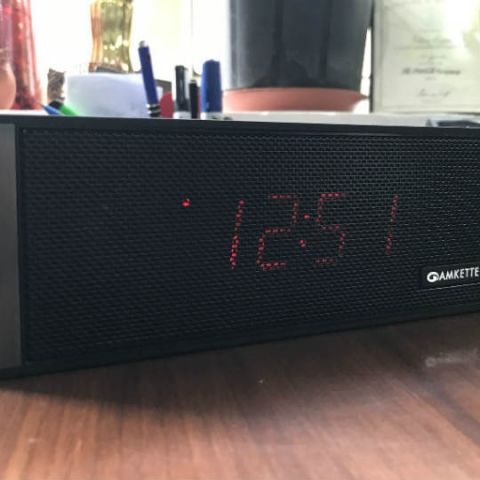 The Amkette TruBeats S50 only makes for a good purchase if you would want so many features, and the closest in terms of its features is the Altec Lansing Lifejacket 2, at over twice its price. Go for it, if you essentially need a desk companion, and not a speaker that delivers prime audio quality. This one’s for features over audio, for those whose ears aren’t quite used to audiophile grade audio.

Enter, the Amkette TruBeats S50 Smart Speaker. Launched on December 6 at an introductory price of Rs. 3,499, the TruBeats S50 is not just a portable speaker. It has a solid metal chassis with rubber panels on the top, giving a sturdy quality to the build. Alongside, the list of features including app-controlled playback, FM Radio, power bank capabilities, and playback options ranging from USB drives, microSD, 3.5mm auxiliary cables, and Bluetooth and NFC. The list of features and its pricing makes this an intriguing gadget to consider.

Does it live up to the expectations? Well, somewhat, but maybe not entirely. Read on.

Audio Performance
The argument stands - you cannot get everything your way. True to this, while the Amkette TruBeats S50 Smart Speaker actually has an incredible number of features for its price, there are notable compromises in terms of audio quality. The primary aspect is distortion - beyond volume levels of 15, there is audible distortion in almost every track. The distortions are particularly evident when you play heavier tracks with elaborate instruments, which can be a bit jarring.

The second factor to note is the lack of emphasis on low frequencies. While the TruBeats S50 does include a rear-facing dedicated bass driver, the output is a bit too low from optimum. This results in rather thin low frequencies and leaves tracks sounding somewhat tuned towards highs, which is not the most pleasant balance of audio in general. There is also a distinct lack of warmth, the nature of which you can hear from less-equipped, better sounding budget speakers as the Logitech X50. 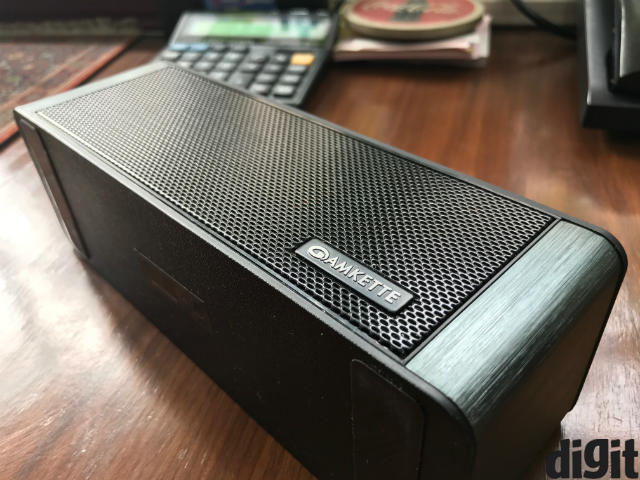 That said, while you do miss out on the intricacy of low frequencies, the dedicated driver ensures that audio does not sound lopsided. The mid frequencies, meanwhile, are average at best. There is a lack of flourish and panache, although the lack of finer details is made up by a pleasant accuracy of pitch and tone. Most notes sound supple, despite the lack of warmth.

Highs, meanwhile, are sharp and high. While sharpness gives the sound signature an edgy distinction, it is not necessarily enjoyable. There is also a lack of sweetness in the audio, but the overall lack of refinement is masked when you play at lower volumes. The main drivers are lowered considerably, and low frequencies sound comparatively better. The sweet spot is at volume levels under 15, and while that would be statistically fine, seeing that the speaker would still be playing at 75% of its peak volume output, the low loudness of audio output ends up making listening at such levels slightly difficult.

While soundstaging is not exceptional, it is fairly decent. In terms of range, the speaker’s build ensures decent coverage of audio. To sum up, the Amkette TruBeats S50 compromises significantly on audio quality, to make way for the array of features. It is not the best-sounding portable speaker for its price by a margin, in terms of the quality of audio. 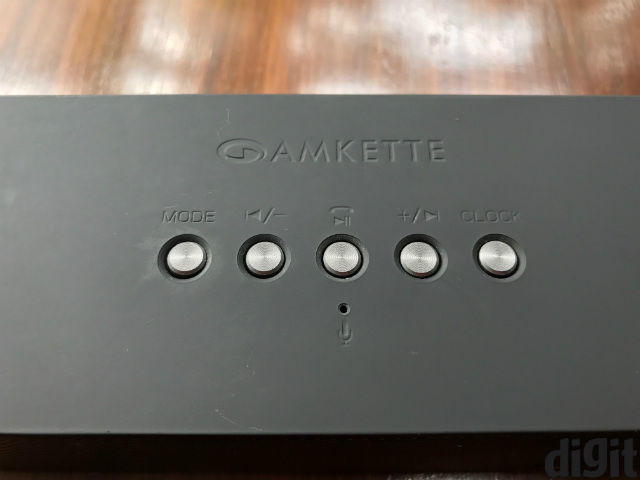 Even in FM Radio playback, the TruBeats S50 seems to struggle to find a clean spot for frequency reception. In parallel comparison with a dedicated iBall FM tuner, the TruBeats S50 does not detect and tune to radio channels easily. You can also control FM channels with the Android app, but the quality of reception is quite jarring.

Moving on to the app, the first public edition is still rather basic. The simple layout is quite likeable, although appearing slightly mundane. It is fairly responsive, although opening it disconnects the speaker from the connected phone. You are then prompted to connect the speaker again to your phone, and subsequently, it operates smoothly. That can be quite irritating, and isn’t a good approach.

It has all the panels for using the playback features, so you can easily control your music from your smartphone. The app is light and convenient, but unlike other speaker companion apps, such as the Ultimate Ears’ Roll, is not visually stunning. It will get the job done, nonetheless.

Build and Design
Amkette has attempted to keep the overall design muted, and this goes well on a desk. Build quality is fairly durable, and the speaker feels sturdy on overall terms. The metal frame has a neat, brushed finish, with two grilles on either end.

However, this is not really a “premium” design per se, and Xiaomi’s Mi Bluetooth Speaker looks and feels more premium in terms of metal-chassis designs at this price. Even the Logitech X100 looks classier, despite the rubber and plastic build. Looking beyond that, however, and the TruBeats S50 is actually one of the sturdiest speakers that we have tested of late. 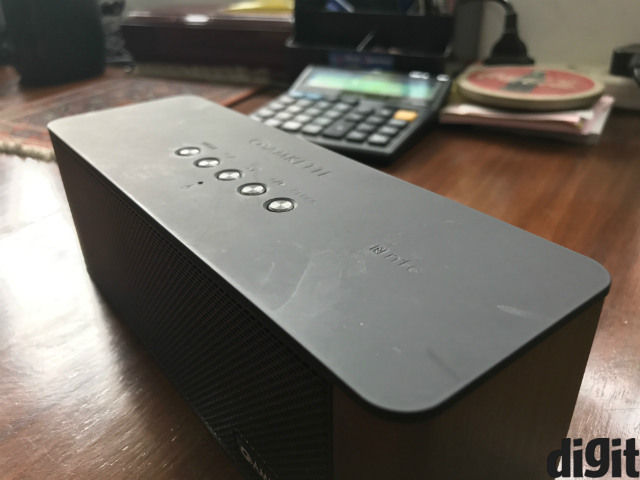 The five buttons also include one to show a digital clock, adding to its versatility. The buttons are slightly rigid, and takes added force to tap. The click, however, is quite satisfactory, and the speaker also has a mic on the front to receive calls. The call reception quality of the integrated microphone is fairly decent as well, and voice is relayed fairly clearly.

All of these combine to make the Amkette TruBeats S50 a versatile speaker - notably more multifunctional than any speaker at or around its price. 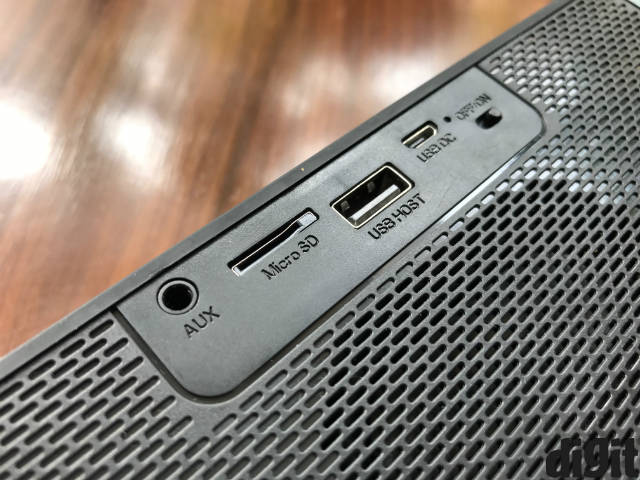 In what is a slightly disappointing note, the TruBeats S50 uses Bluetooth v3.0 to operate wireless connections, and as a result, the connection between a phone and the speakers remains consistent for only about 12 feet. With LOS (loss of signal), you can squeeze out up to 18 feet without too many obstacles in between. Transmission will be intermittent beyond 12 feet.

Battery life, though, is a boon. The Amkette TruBeats S50 lasts for a full 9 hours and 35 minutes based on our playback tests, and about 1 hour 20 minutes to charge completely. It has a 3600mAh battery, which also sees it function as a highly effective power bank.

Bottomline
If versatility and multifunctionality in portable speakers is your prime importance, there are literally no speakers at this price that offer the same value. For Rs. 3,499, you get a portable speaker with five connectivity modes, an FM tuner, a digital clock, a companion app to control it, and even a mic to receive and talk on calls.

This, however, is not an audiophile’s budget purchase. The Amkette TruBeats S50 is barely mediocre in terms of the audio performance - subdued bass, unenthusiastic mids and rather shrill highs, along with audible distortion. It sounds like a budget speaker, and the likes of Logitech X50 and Mi Bluetooth Speaker sound much better in comparison.

The Amkette TruBeats S50 only makes for a good purchase if you would want so many features, and the closest in terms of its features is the Altec Lansing Lifejacket 2, at over twice its price. Go for it, if you essentially need a desk companion, and not a speaker that delivers prime audio quality. This one’s for features over audio, for those whose ears aren’t quite used to audiophile grade audio.