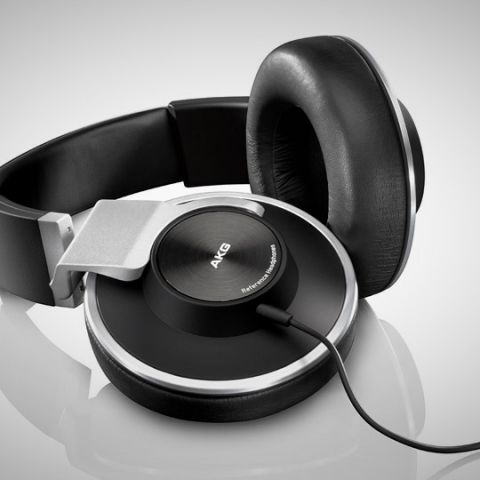 For closed back headphones the AKG K551 is surprisingly open and airy. The precision and clarity on the K551 is through the roof. The AKG K551 sticks to its reference monitoring legacy to the tee. However, if you want your 20 to 150 KHz space bumped up, these are not the cans for you. If you want analytical sound, and don't mind the bulk, look no further.

In a day and age where looks matter as much as sound quality, we find the flagbearers of the old guard – in this case AKG – trying to come out with models that are not just great sonic performers but also trendy and easy on the eyes.

Design and build
The headphone seems to be placed somewhere in between circum-aural and supra-aural. For someone like me, who has rather small ears, they are almost around the ear, but for most people the pads will rest over the ears. The driver housing as you might be able to discern from the images is pretty large, and on the inside it’s lined with soft cushiony earpads, which are quite comfortable. The headband adjusts quite well to any head size and the extension mechanism looks sturdy.

The earcups swivel all the way and go completely flat making them easy to stow away (supposedly). The trouble with this is that even with the single axis foldability, they’re just too large to be lugged around. If they could be folded further like say the Sennheiser HD280 Pro, I’d have been slightly more willing to buy into this use-case. The second point of dissonance between their positioning as portable headphone arises when you take a gander at the cord. It’s not painfully short, but considering the price, bulk and the “serious” lineage this headset comes from, you just can’t get used to the flimsy looking cable. And yes I said headset in the previous line; you get an in-line microphone and controls on the said cable.
The headphones do have great build and materials but at the same time have managed to keep the weight in check – 305 g is not exactly light but not that heavy. The isolation is also in-line with something you’d expect on headphones that are meant to used in diverse environments. The closed back design keeps out sounds and the seal offered by the pads is quite good.
Performance
The drivers on this chunky headphone are larger than what you’d normally find  – 50 mm – but with a low impedance rating and higher sensitivity they’re not hard to drive at all. This bodes well, for the K551 considering they’re meant to be paired with iPods, iPhones and other mobile devices. For closed back headphones the AKG K551 is surprisingly open and airy. The precision and clarity is through the roof. Although this is supposed to be a consumer product, specifically designed to look great and be portable (at least in theory), the AKG K551 sticks to its reference monitoring legacy to the tee when it comes to sonic prowess. We get the same precise flat-response signature we loved on the older K271 MKII or K240 MKII we had with us earlier this year.
However – and this is a huge listener’s bias – they will be construed as bass shy for sure by most people. If you want your 20 to 150 KHz space bumped up, these are not the cans for you. Being a proponent of flat response (or as I like to call it, “the way god meant it to be heard”) it was surprising that on some tracks even I felt the bass could’ve been better. However, if you want precision, detail and that analytical sound look no further. All this coming from a headphone positioned for the iPod seems a bit weird, I know, but hey it’s AKG, some things they can’t let go of can they?
Verdict
At close to 25k the AKG K551 is not exactly cheap. The way I look at it you get great sound and looks to boot. If you’re ok with the bulk, these are nice headphones to go for. But if looks don’t matter as much, old favourites like the Audio-Technica ATH-M50 or the Sennheiser HD 280 Pro are much cheaper options to consider. Even when it comes to options that you can flaunt, there are alternatives such as the recently reviewed Ferrari T350 by Logic 3 which even feature active noise cancellation for the same price.