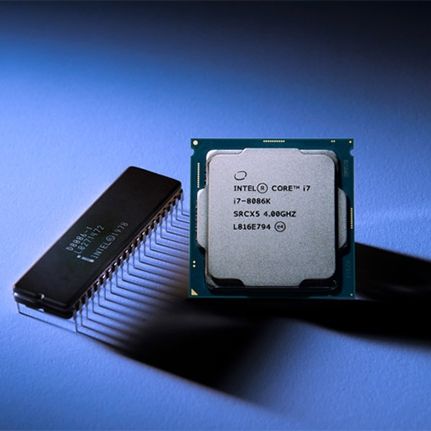 Intel revealed the next generation of processor microachitecture and discussed the progress of the consumer devices on their roadmap. These include the range of 10nm processers and other key technologies such as computer memory, networking, server processors and other hardware with applications in AI and graphics.

Intel demonstrated a range of 10nm-based systems in development for PCs, data centers and networking, and previewed other technologies targeted at an expanded range of workloads.

The company also shared its technical strategy focused on six engineering segments where significant investments and innovation are being pursued to drive leaps forward in technology and user experience.  They include: advanced manufacturing processes and packaging; new architectures to speed-up specialized tasks like AI and graphics; super-fast memory; interconnects; embedded security features; and common software to unify and simplify programming for developers across Intel’s compute roadmap.

Together these technologies lay the foundation for a more diverse era of computing in an expanded addressable market opportunity of more than $300 billion by 2022.1

Foveros paves the way for devices and systems combining high-performance, high-density and low-power silicon process technologies. Foveros is expected to extend die stacking beyond traditional passive interposers and stacked memory to high-performance logic, such as CPU, graphics and AI processors for the first time.

The technology provides tremendous flexibility as designers seek to “mix and match” technology IP blocks with various memory and I/O elements in new device form factors. It will allow products to be broken up into smaller “chiplets,” where I/O, SRAM and power delivery circuits can be fabricated in a base die and high-performance logic chiplets are stacked on top.

Intel expects to launch a range of products using Foveros beginning in the second half of 2019. The first Foveros product will combine a high-performance 10nm compute-stacked chiplet with a low-power 22FFL base die. It will enable the combination of world-class performance and power efficiency in a small form factor.

Sunny Cove enables reduced latency and high throughput, as well as offers much greater parallelism that is expected to improve experiences from gaming to media to data-centric applications.

Intel also reaffirmed its plan to introduce a discrete graphics processor by 2020.

The combination of Intel Optane SSDs with QLC NAND SSDs will enable lower latency access to data used most frequently. Taken together, these platform and memory advances complete the memory and storage hierarchy providing the right set of choices for systems and applications.