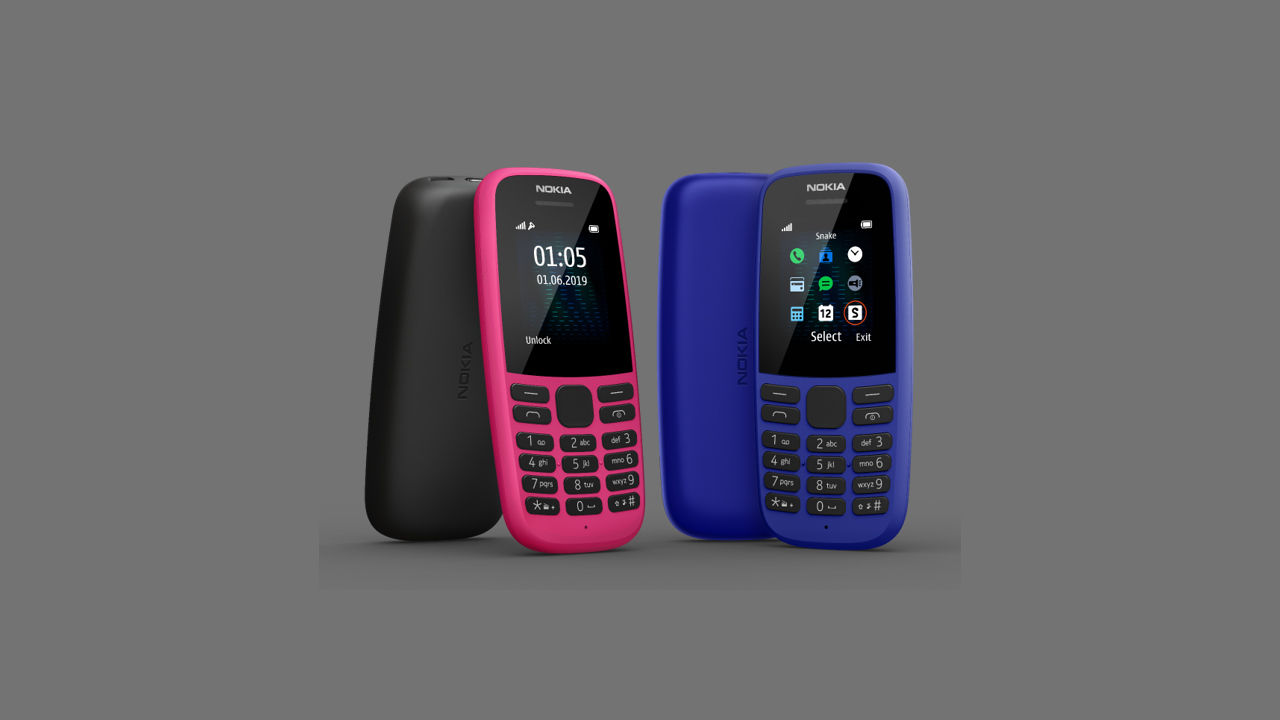 HMD Global, the company which seels Nokia-branded phones, has launched the Nokia 105 (2019) feature phone in India. Priced at Rs 1,199, the phone comes with 4MB RAM and can store up to 2,000 contacts. Nokia 105 Dual Sim is now available in Blue, Pink and Black colours on Nokia.com/phones and at top mobile retail outlets across India.

HMD Global, the home of Nokia phones, today announced the all new fourth generation of its most popular feature phone - Nokia 105. The new Nokia 105 comes with everything the Nokia 105 is known for, including a battery that lasts, allowing you to talk from sunset to sunrise with one charge. Its 1.77” colour screen is great for playing games like the classic Snake, and the island keymat makes dialling and texting easy and enjoyable. With an inherently coloured polycarbonate body, the new Nokia 105 effortlessly combines modern design with simplicity and durability in a package that offers great value.

“The Nokia 105 has sold in tens of millions across the globe proving its popularity and timeless quality as a legendary phone. This is the fourth generation in a line of feature phones designed for those who want to embrace mobility. We wanted to build on the winning formula of one of our most popular feature phones globally and bring the same quality and even better functionality, with a focus on first-time mobile users. We’ve used a familiar design, with modern contours and we’ve packed the phone with a long-lasting battery, so you can be on a call for hours at a time.”

“The love for Nokia feature phones reigns high in India for their build quality, reliability and functionality. With Nokia 105, we are bringing a phone to those consumers who are embracing mobility for the first time, giving them a phone with long lasting battery and everyday essentials in a modern design. I am excited to bring Nokia 105 to Indian consumers.”

Nokia 105’s removable battery can last for days between charges, making sure your feature phone is ready to go when you are. With the Nokia 105, fans can call family and friends for hours on end without worrying about the battery life of their phone. With up to 2,000 contact and 500 SMS storage space, you’ll always have the information that matters with you, ensuring you stay connected with all your contacts from one device.

Additionally, take your music on the go, with Nokia 105’s built-in FM radio and light up your way with the ever-popular LED torchlight – simply press the up key twice to quickly turn the torch on and off.

Inspired by the heritage of Nokia phones, its contoured modern design makes the Nokia 105 a great fit in hand. Featuring inherent colour throughout its polycarbonate casing, minimising the visual impact of knocks and bumps, Nokia 105 is built for everyday life, delivering the quality, reliability and robust design fans expect from a Nokia phone. The island keymat features separated keys to make dialing and texting easy.

And to make sure you’ll have hours of entertainment, Nokia 105 comes with six try and buy preloaded Gameloft games including Tetris, Sky Gift, Airstrike, Nitro Racing, Ninja UP! and Danger Dash.

Nokia 105 Dual Sim will be available in Blue, Pink and Black starting 20th August 2019 and will retail at a recommended best buy price of INR 1,199 on Nokia.com/phones and at top mobile retail outlets across India.