Vistara's 'RADA' robot to assist and address customers at airports

For now, the RADA robot will be placed at Vistara's Signature Lounge at Delhi Airport's Terminal 3 from July 5 for addressing customer's queries in the lounge. 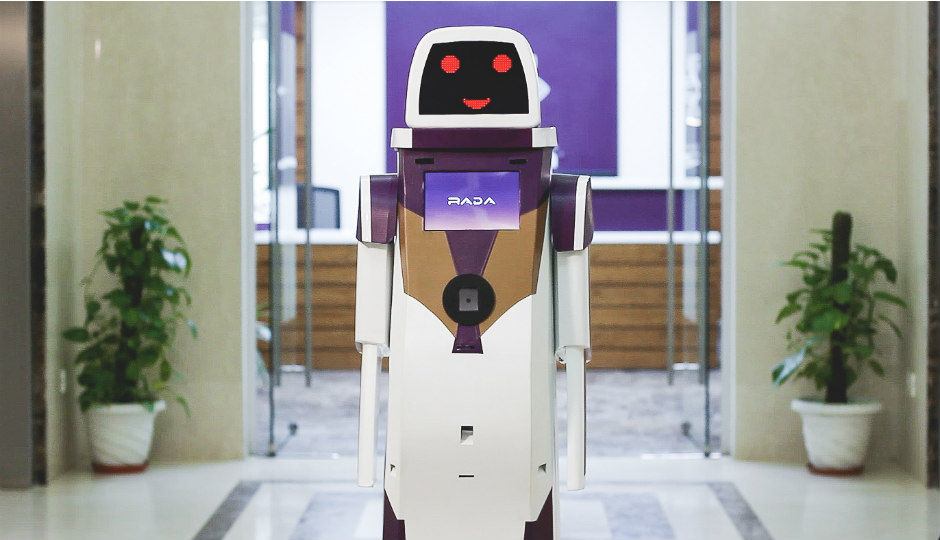 Vistara's 'RADA' robot to assist and address customers at airports

Vistara has launched a new AI-based robot that is aimed at assisting customers at airports, along with addressing their queries. The 'RADA' robot will initially be placed at the company's Signature Lounge at Delhi Airport's Terminal 3 from July 5, 2018, for helping customers in the lounge. The robot's functionality is touted to be improved over time with new features, after taking user feedback.

In its continuous effort of driving innovation to provide the most customer-centric products and service, Vistara has created a unique robot using Artificial Intelligence (AI) technology that can assist customers, address their queries and entertain them. Named ‘RADA’, the robot is aimed at helping the airline offer a seamless experience and an ‘intuitively thoughtful’ on-ground service to its customers, keeping with the changing consumer behaviour. During its initial stage, RADA will be placed at Vistara’s Signature Lounge at Delhi Airport’s Terminal 3 from July 5, 2018 to assist customers using the lounge before they board their flights. ‘RADA’ will be further developed over a period of time in terms of functionality and features for future use cases, after gauging customer feedback.

At present, the robot can scan boarding passes and further provide information on the terminal, departure gates, weather conditions of destination city, real time flight status as well as information about Vistara’s products and services. It greets customers and interacts with them using basic hand movements, and is capable of moving around in the lounge on predefined pathways. Additionally, it can engage with kids and adults alike by playing games and other multimedia content such as songs and videos.

Commenting on the introduction of ‘RADA’, Vistara’s Chief Executive Officer, Mr. Leslie Thng said, “Innovation is one of the core values engrained in the DNA of Vistara’s culture, which we have fostered within the organization in many ways. RADA is a manifestation of this endeavour. Vistara has disrupted the market through several innovations with the sole objective of redefining air travel in the country, while making its processes more robust and resources more effective. With RADA, we aim to change the way people interact and fly with an airline. We will be developing ‘RADA’ based on customer feedback and equipping it with the most effective features in the time to come. Our steadfast focus remains to be on delighting customers across all touchpoints, and we’re confident that ‘RADA’ will help us take the ‘new feeling’ to the next level.”

‘RADA’ has been envisioned and incubated under Vistara’s Innovation initiative. It is conceived, designed and engineered by its team of technology experts and apprentices from Tata Innovation Lab with support from students of reputed institutions. It is arguably one of India’s most economical robots completely made of indigenous components, thus making a compelling ‘Make in India’ story. ‘RADA’ is built on a chassis of four wheels, enabling it to rotate 360 degrees, and it has three in-built cameras for cognitive interaction. Combining these components with an effective voice technology, Vistara has developed the robot to provide a simple solution to cater to the emerging and future trends.

Explaining what sparked the idea behind ‘RADA’, Vistara’s Chief Information and Innovation Officer, Mr. Ravinder Pal Singh, “It was a realisation that the talented, young employees engaged in ground services, gain immense customer service experience on the job, but the limited scope of their routine work could challenge their true potential. Some of them spend decades within the walls of an airport, assisting customers. Vistara is an organization that encourages its employees to look beyond boundaries and leverage the talent and skills of such employees. Therefore, we thought of inventing a robot that can help us enhance customer experience by gradually taking over the routine, mundane tasks. The basic premise of the thought was to develop a simple and extremely cost-effective practical robot that can engage in basic human interaction to begin with, and can further be developed to perform more complex tasks, as consumer habits continue to evolve in the technological age where humans and machines will complement and create a evolved harmonious evolution.”

Vistara continues to invest in cutting-edge technology mainly in three areas, namely Artificial Intelligence, Robotics and Data Science with core emphasis on customers while continuously improving people and quality of its workplace – all with the purpose of delivering an unmatched travel experience as well as to optimize processes and operations. The airline has today developed a robust technological framework to support its growth and to ensure a seamless experience for millions of travellers. It is the first Indian airline to have built an end-to-end IT infrastructure on Cloud which provides scalable and elastic infrastructure.

As the highest-rated Indian airline on SkyTrax and TripAdvisor and winner of numerous “Best in Industry” awards, Vistara has consistently raised the bar in the Indian aviation industry and made flying an experience to look forward to again. In a short span of three years, Vistara has flown over 9 million customers, and today serves 22 destinations with over 730 flights a week, operated by a fleet of 20 Airbus A320 aircraft. Recently, Vistara won top honours in TripAdvisor’s Travellers’ Choice Awards for 2018, bagging titles such as ‘Best Airline – India’, ‘Best Regional Airline – Asia’ and ‘Travellers’ Choice Winner (Economy Class) – Asia’. Vistara was also recently awarded for being the ‘Most Passenger Friendly Airline’, jointly by the Ministry of Civil Aviation (Govt. of India), Airports Authority of India and Federation of Indian Chambers of Commerce and Industry (FICCI) as well as the title of ‘Best Airline – Service Standards’ (Domestic Category) by Pacific Area Travel Writers Association (PATWA) at ITB Berlin 2018.