SCC, NIUA and WD organize round table to discuss role of surveillance in India 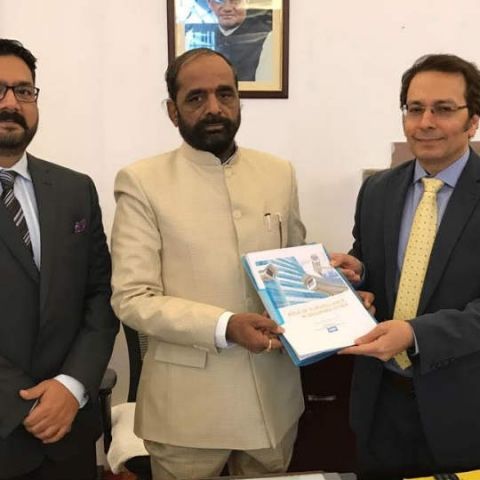 Smart Cities Council (SCC) and the National Institute of Urban Affairs (NIUA) organized a roundtable in New Delhi to discuss the role of surveillance in India. The event also saw the launch of the report on “Roll of Surveillance in Securing Cities.” The report is supported by Western Digital and talks about the need for surveillance to act as a catalyst for secure cities in India. It also talks about the role of data and IT in creating safer and smarter cities, as well as the urgent need for better storage capacities.

Smart Cities Council (SCC) along with National Institute of Urban Affairs (NIUA) today organized a round table in New Delhi to discuss the role of surveillance for a safe and secure India.
The event also witnessed the launch of the report on “Role of Surveillance in Securing Cities” in the presence of senior government representatives, Mr. G. K. Pillai Chairman, Data Security Council of India & Former Home Secretary and Prof Santosh Kumar, Executive Director, National Institute of Disaster Management, Ministry of Home Affairs. The report has been supported by Western Digital, an industry-leading developer and manufacturer of data storage solutions.

Focus Areas:
Surveillance to act as a catalyst for secure cities in India
Role of data and IT, especially surveillance is vital for safer and smarter cities
Urgent need for better storage capacities

The report aims to highlight the need for surveillance and the role it plays in making our cities secure and smarter. It also provides an analysis on opportunities, challenges and the current scenario for video surveillance in India. The study is a platform to analyse and implement the recommendations for creating safer and securer environment.

India today is on its way to develop its first 100 smart cities. With Hon’ble Prime Minister Narendra Modi’s vision of ‘Smart Cities’, the role of data and IT,  especially video surveillance in enhancing security will become vital. Under the flagship “Safe City” project, the Union Ministry proposes US$333 million to make seven big cities (Delhi, Mumbai, Kolkata, Chennai, Ahmedabad, Bangalore and Hyderabad) focus on technological advancement.

Speaking at the launch, Khwaja Saifuddin, Senior Sales Director - South Asia, Middle East and Africa, Western Digital, said, “With growth of public infrastructure on a constant rise, accompanied with increasing IT and security spending, the surveillance sector is expected to witness a robust growth in India. All these factors pertaining to video surveillance create a lot of data, which needs to be stored for future analysis and monitoring. Therefore, it is imperative to set the video surveillance standards in place to ensure high quality and sustainability.”

The round table delivered an interesting outcome focusing on the real-time, dynamic and world class video surveillance system forming an important key to achieve the vision for secure cities. Video surveillance adaptation rate and increasing demand for high-tech technologies also emerged as an important driver of the outstanding growth of the surveillance market.

The event also delivered a consensus on the government focusing on context specific needs and investing in the latest video surveillance technology with highest-resolution cameras, best quality analytical tools and highest capacity storage

Mr. Jagan Shah, Director, NIUA stated that, “Video surveillance has emerged as a key component of the safety and security apparatus used by various organisations, both public and private. All state governments need to ensure the security of citizens through a vigilant attitude and zero tolerance toward violators of public safety. Use of ICT and advanced instrumentation is necessary for effective response, along with the appropriate urban planning that reduces dark spots in the city and promotes greater round-the-clock activity on city streets. The powers of planning and technology need to be used in an integrated manner to achieve safe, secure and liveable cities."

According to Mr. Pratap Padode, Executive Director & Founder, Smart Cities Council India “There is a positive correlation between urbanisation and crime. Therefore with affirmative evidence that surveillance does control crime and given the Smart Cities Mission drive, city administrations need to focus on installing and upgrading defined specification of cameras, storage systems and allied technologies. Our research and survey findings have highlighted that the current storage capacity is poor; while the overall surveillance system was rated higher on effectiveness and adaptability. There is need for cameras that can assist in ‘Crime detection’ and ‘Community watch’; while crime prevention, traffic management and women safety are other objectives that are deemed important.”

One of the key survey findings was that ‘large storage capacity’ came up as the number one priority. As hard drive technology continues to advance, it is important to utilise open standards to ensure that storage is scalable and future proof to enable longer retention cycles and broader analytical capabilities.

In addition, advances in IP-surveillance - such as intelligent video algorithms - will make it even more critical to select open storage devices that can handle combinations of data from different sources.

Today in India, video surveillance is not just restricted to Tier-I cities, but many Tier-II and Tier-III cities. An interesting observation which the report highlights is the sharp reduction in violence or crime in the cities owing to video surveillance systems which indicated that it is indeed proving effective in the public domain in India.

In times to come, multiple stakeholders will need to work in tandem with each other and derive impactful measures to achieve a safer and more secure smart cities for the citizens. A dependable collaboration between the public and private users as well as vendors/ installers and policy makers is also of utmost importance. These are the priorities that at the end will help us achieve securer cities through smart surveillance.