Now monitor air quality in major cities via a tweet 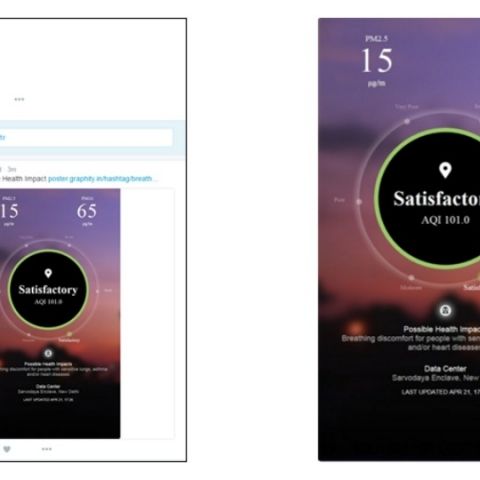 Twitter India has partnered with India Spend to launch a #Breathe service. The service will allow Twitter users in Delhi, Mumbai and Bangalore to monitor the air quality in their area through a tweet. Users can avail the service by posting a tweet using #Breathe along with their location. They will then get a visual notification with a measurement of air quality along with possible health implications.

Pollution is rising at an alarming rate and people frequently get into discussions about the air quality in India. People do not have a quick, easy way to get live updates of the air quality in their neighbourhood. But the situation is set to change. On the eve of Earth Day, @TwitterIndia has partnered with @IndiaSpend to launch a new #Breathehashtag service to enable Indians to get real-time information about the air pollution levels around them through a simple Tweet.

As a live communications platform for people to use every day, Twitter powers this new #Breathe service to increase public awareness about the alarming rise in air pollution levels across major cities in India. In the initial launch phase, Twitter users will be able to constantly monitor the air quality in their neighbourhoods in three major cities: Delhi, Mumbai and Bangalore.

Taking into consideration the strategic importance of the above cities, the next phase of the campaign will aim at bringing the#Breathe service to these remaining cities.

How does it work? Tweet using #Breathe hashtag with your location, then you will get back a reply Tweet with a real-time update about the air quality in your area. The reply Tweet will include a visual notification with a measurement of the air quality along with possible health implications.

Raheel Khursheed, Head of News and Government Partnerships at Twitter India, said, “Not only is Twitter the best way to see what’s happening in your world right now, but it is also the best place for real-time information updates to make your life better every day. Pollution levels across India are rising and is a huge health issue affecting millions of people. By leveraging India Spend’s air-quality monitoring network, Twitter is democratising access to live air pollution data to help Indians make healthier living decisions from Earth Day 2016 and beyond.”

Govindraj Ethiraj, Founder, India Spend, said, “India Spend’s mission is to improve the quality of public discourse by using data to tell stories. With #Breathe, we are combining the latest in low-cost censor technology with increasing citizens’ demand for alternative data narratives. Going forward, we believe that projects like #Breathe will convert into real action on ground and policy response to improve the quality of our lives.”

In January 2016, Twitter had partnered with Delhi Transport Department (@TransportDelhi) during the odd-even car driving experiment to launch #PollutionFreeDelhi service. The initiative focused on enabling users with real-time info for bus and metro route options, traffic updates, and weather conditions. Twitter was able to support Delhi citizens in making the#PollutionFreeDelhi a success, adding another milestone to its daily utility service in India.