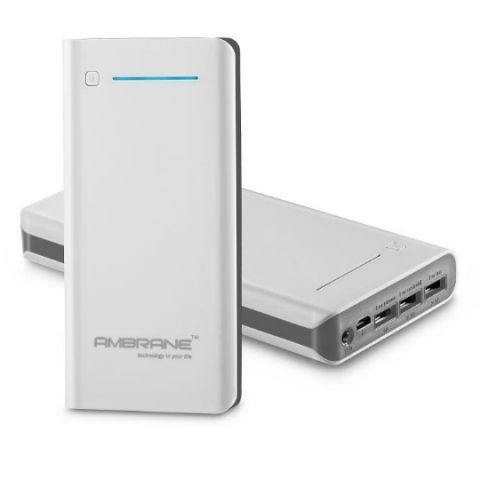 Ambrane has launched the P-2000 power bank with a capacity of 20800mAh. Priced at Rs. 1,699, the power bank features three USB ports, one with 1A output, and two with 2.1A output. The company says that the power bank is manufactured using LG/Samsung Li-ion cells and can charge most smartphones up to seven to eight times. The Ambrane P-2000 powerbank is available in retail stores as well as e-commerce portals like Snapdeal, Flipkart, Amazon, and Paytm.

Ambrane India one of the leading IT brands in computer peripherals, Mobile Accessories and No.1 in Power Banks* brings in its latest and greatest power bank the P-2000 (20800 mAh power bank), yet another testament to the dominance Ambrane holds in the power accessory market. A monster capacity that will keep most families going for a weekend, or a single person for a week's road trip, the triple fast charging for both input and output, and no-frills design, making it the right combination of being portable and powered.

A Power bank like no other, P-2000 is clad in White with Grey Mosaic built, simple and high capacity, with easy to handle body, and seamlessly splicing design for everyday use. If you want something stylish that packs plenty of power, then P-2000 could be it.

This power bank’s high power capacity makes it great for charging multiple devices, especially considering its 3 USB charging ports. The device focuses on offering USB charging of different amperage (the ports with 1A, 2.1A and 2.1A), for simultaneous charging, to charge your gadgets around the clock.  It also offers a conversion rate of 80 percent, & automatically adjusts output based on the device. The ultra large capacity of power is sufficiently enabled for talk time and support with multimedia devices, along with the ability to withstand 500 power cycles in its lifetime beginning a new battle in Power!

The powerbank is not only efficient but technologically intuitive as well. Its multiple chipset protection provides better security features. Crafted with keeping safety in mind – The device monitors output current and shuts off when current exceeds the maximum limit to protect the device. Furthermore, the device is well protected from High temperatures, short circuits, over discharge and electromagnetic fields.

With the inbuilt Torch Light for the several SOS situations, along with the Indicative LED’s to indicate for charging and discharging, Ambrane P-2000 is the solid choice for every power-packed user.

The product is already available with leading retail stores and ecommerce portals namely Snapdeal, Flipkart, Amazon and PayTm in India.