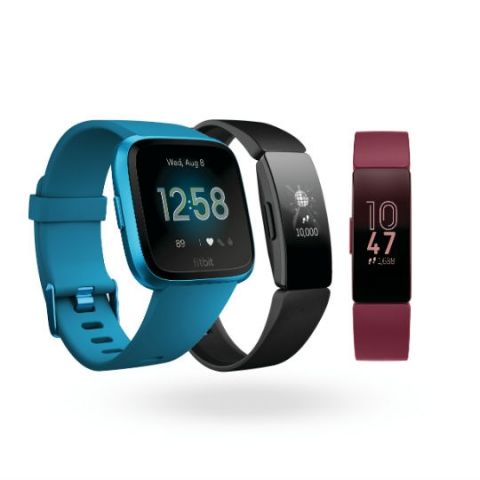 The Versa Lite Edition offers a range of features such as PurePulse 24/7 heart rate and Sleep Stages tracking, 15+ goal-based exercise modes, connected GPS, smartphone notifications, apps, and relative SpO2 sensor. Fitbit claims that the device offers a battery life of over four days. Like the standard version of the Fitbit Versa, the Lite Edition features a swimproof design.

The Versa Lite will be available in white, lilac, mulberry, marina blue and charcoal. Fitbit claims that its accessories feature materials that are stain-resistant, and are swim-ready. This includes silicon bands as well as hybrid woven bands. The company notes that the existing Versa accessories are compatible with the Versa Lite Edition.

The Inspire HR fitness band offers a 24/7 heart rate tracking device. Other features include all-day automatic activity, exercise and Sleep Stages tracking, with 15+ goal-based exercise modes, connected GPS, and Relax guided breathing. It also offers a swimproof design with a touch screen display and the company claims a battery life of five days. The Inspire HR is available in black, lilac and two-tone black and white.

The Fitbit Inspire is a more affordable version of the Inspire HR. However, the company notes that the devi still managed to offer the “essential health and fitness features to help consumers stay motivated.” This includes automatic activity, exercise and sleep tracking, goal celebrations, Reminders to Move and timer and stopwatch apps. Like the Fitbit HR, it too offers a swimproof design and a five-daye battery life.

A fourth wearable, Fitbit Ace 2, has also been announced but its exact price and availability is not yet known. All that the company has revealed is that it will be aimed at kids and will be made available sometime this year. Since the wearable is aimed at kids, it is available in a range of kir friendly colours such as grape, night sky and neon yellow, and watermelon and teal. It also features a number of printed bands.

The company also announced that it was redesigning the Fitbit app. It was noted that the new design aims to make it easier to view and understand their health and fitness stats, log data, discover new content, keep an eye on their progress in Challenges, and better connect with Fitbit’s large global health and fitness social community. The Fitbit Community Feed has also been expanded to 80 new markets in nine languages.