Super-thin ‘e-skin’ can turn your body into a display 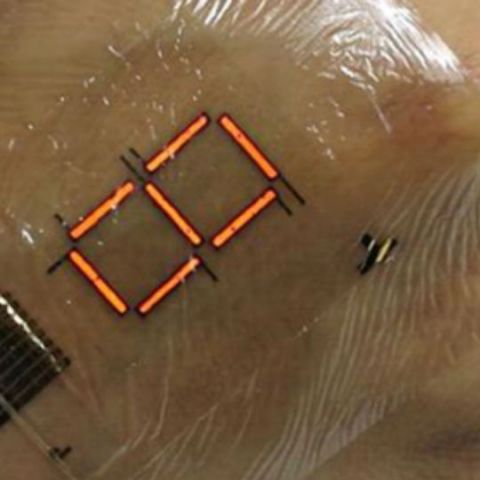 Japanese scientists have developed an electronic skin, which is 3 micrometers thick and can be placed over the skin on any part of the body

Japanese scientists from the University of Tokyo have developed a thin electronic skin (e-skin) that can be laid over the actual skin on any part of the body to turn it into an electronic display. This e-skin is just 3 micrometers thick and is flexible enough to bend when the wearer is moving about. The displays uses polymer light-emitting diodes or PLEDs and organic photodetectors (OPDs). While similarly thin displays have been made before, those materials weren’t stable enough to endure in air for more than a few hours. In order to tackle the problem, the team used a protective film that consisted of silicon oxynitride and parlene (called passivation layer) to protect the display from oxygen and water vapor.

The scientists published their study in Science Advances and the researchers hope that in the future, these display could be laminated directly into organs in order to monitor blood oxygen levels during and after surgery. This information could be displayed by changing the intensity or the colours of the PLEDs. The proof of concept showcased by the researchers is connected to electrodes for power, and only shows seven-segment digital displays and color indicators. However, in the future, the display may be able to power itself using body heat or flexible batteries. If covering your skin in displays wasn't enough, Samsung has filed for a patent for augmented reality contact lenses that can send or receive data from nearby phones.