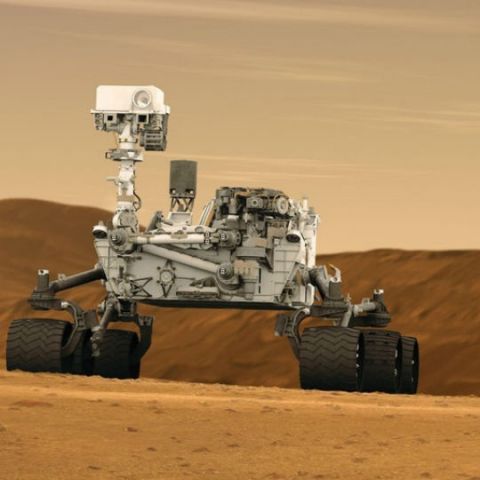 A team of researchers, including a graduate student from Arizona State University, has measured and studied the density of rock layers in the 154-kilometre-wide Gale Crater on Mars using non-science engineering data from NASA's Martian rover, Curiosity. The findings, which were published yesterday in the online journal, Science, reveal that the layers are more porous than expected. The discovery also gives scientists a new technique (involving the use of an accelerometer) to use in  future studies as the rover makes its way up to its next destination, Mount Sharp.

"What we were able to do is measure the bulk density of the material in Gale Crater," commented Travis Gabriel, a graudate student in ASU's School of Earth and Space Exploration. Gabriel was successful in computing the ideal grain density of rocks and ancient lakebed sediments around the rover. "Working from the rocks' mineral abundances as determined by the chemistry and mineralogy instrument, we estimated a grain density of 2,810 kilograms per cubic meter," he added. "However, the bulk density that came out of our study is a lot less — 1,680 kilograms per cubic meter."

What the smaller figure means is that the rocks have been compressed a lot less than scientists expected. According to a recent report by ASU Now, the team used engineering data from the last five years of the mission to measure the gravitational pull of the Red Planet at 700 points along the rover's tracks. "The lower levels of Mount Sharp are surprisingly porous," commented Kevin Lewis of John Hopkins University. "We know the bottom layers of the mountain were buried over time. That compacts them, making them denser. But this finding suggests they weren't buried by as much material as we thought."

The origins of Mount Sharp have been debated by scientists for a long time now. The recent findings suggest that the mountain's lower layers have been compacted by one or two kilometres of material, which is a lot less than expected. If the mountain were once completely covered in sediments, as previously hypothesised, they would have weighed more heavily on the materials in the base, thereby compacting them. Scientists will now continue to study the upper layers of Mount Sharp.

Related Read: NASA's Curiosity shares a selfie before setting off on new adventure