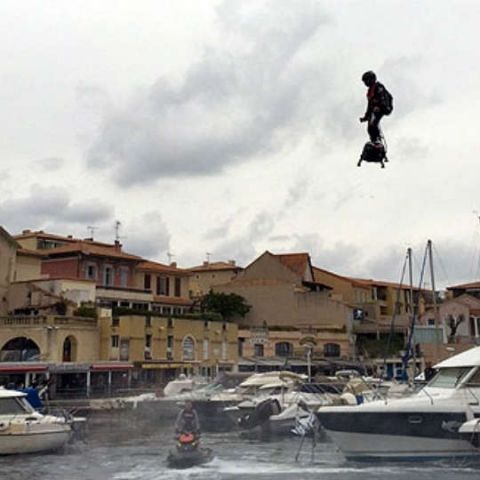 For the attempt, Zapata used a vehicle called the Flyboard Air that is developed by his company, Zapata Racing. The company claims that the vehicle is capable of reaching a maximum height of 10,000 feet (3,048 meters) and travel at a top speed of 150 km/h. A Guinness World Records adjudicator was on hand to officiate the record attempt and confirmed that the hoverboard complied with the rules of the record.

Unlike current ‘hoverboards’ that are just self-balancing scooters, Zapata’s Flyboard Air is actually capable of flight. According to the company website, the vehicle is still in the prototype phase and won’t be available in the market this year. Last year, Lexus released a teaser video of a hoverboard called the Slide. It is powered by magnets that make the board levitate via magnetic induction and reverse polarity. The board also required the magnets to be cooled by liquid nitrogen. However, the Slide is also the prototype stage. So for now, we will just have to be content with buying hoverboards for our toys.

You can watch the first test of the Flyboard Air below: