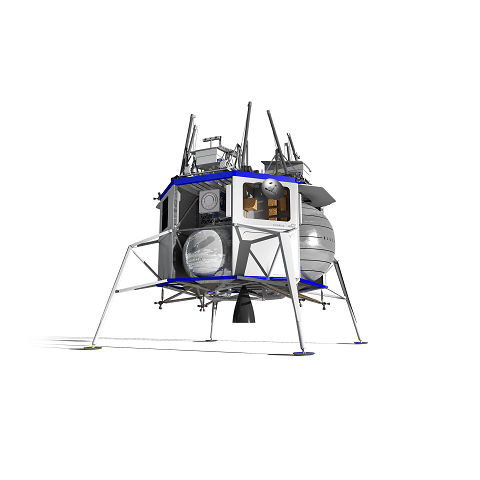 It will come in two variants, one of which is designed for human-rated ascent and 6.5 metric tonnes of cargo

Amazon CEO Jeff Bezos was thrilled to announce his new vision for continued space exploration yesterday in Washington DC. He announced that Blue Origin, the private space agency he founded in 2000, was currently working on a large lunar lander called Blue Moon. He also announced Blue Origin’s new plan to put Americans on the Moon by 2024 using Blue Moon. To achieve this, Blue Moon will be equipped with the space agency’s latest BE-7 engine.

According to a news release sent out by Blue Origin, Blue Moon is a “large lunar lander capable of delivering multiple metric tons of payload to the lunar surface based on configuration and mission.” The cargo variant, which was revealed yesterday at the announcement, is capable of carrying 3.6 metric tonnes of cargo to the Moon’s surface. Blue Origin has also designed a variant that can take up to 6.5 metric tonnes of cargo to the Moon with a human-rated ascent stage.

BE-7 is the American space agency’s latest addition in the family of Blue Origin engines. “The BE-7’s 40 kN (10,000 lbf) thrust is designed for large lunar payload transport. The engine’s propellants are a highly-efficient combination of liquid oxygen and liquid hydrogen. The BE-7 will have its first hotfire this summer. The engine will be available for sale to other companies for use in in-space and lander applications,” writes Blue Origin.

Blue Origin has also founded a non-profit club called Club For the Future. The club is dedicated to inspiring and engaging the next generation of space entrepreneurs and fans with the aim of continued living and working in space. “The Club will bring together K-12 students, educators and leaders for campaigns and initiatives utilizing Blue Origin’s unique access to space.” Only time will tell whether Blue Origin follows through with its plan to put Americans on the Moon by 2024.