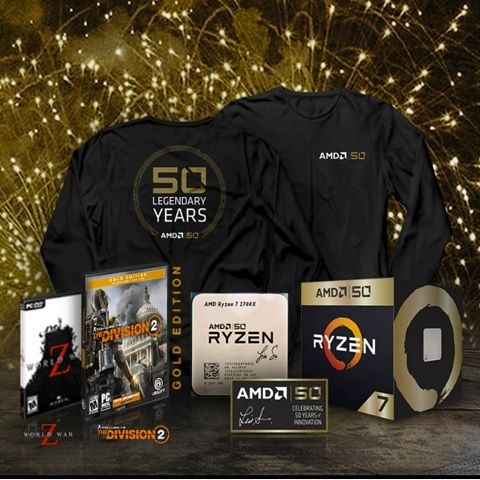 To celebrate its 50th anniversary, AMD has launched the AMD Ryzen 7 2700X Gold Edition. The processor comes signed by Lisa Su, the Chief Executive Officer of AMD. Buyers of the Gold Edition will also receive two free games, a Lisa Su signature sticker, and an AMD 50th anniversary t-shirt. According to the popular American chip maker, the entire celebration package is available only for a limited time through participating retailers.

The two free games included are World War Z and The Division 2 Gold Edition. “With The Division 2 Gold Edition you get the main game, Year 1 Pass, 7-day early access to all Year 1 episodes, 8 classified assignments, 3 new specializations and more,” writes AMD on its website. “Band together in World War Z, where you and a few hardened survivors are left to take on millions of ravenous zombies without feeling or fear. Plus, you get an exclusive AMD50 weapon skin on top of it.”

First started life in 1969 as a Silicon Valley start-up, AMD (Advanced Micro Devices) has been and is a key player in the semiconductor business for computer processors. In 2006, AMD acquired Canada-based graphics technology company ATI and integrated its Radeon series of graphics cards in its own offerings. Lisa Su has been the Chief Executive Office of AMD since October 2014 and was recognised by Fortune as one of the World’s Greatest Leaders in 2017.