AMD has announced it will start selling AMD-branded memory modules, made by partners, in a dual-effort to provide a “holistic customer platform experience” (read AMD Vision), and, ensure customers who are buying AMD processors (whether APUs or CPUs) get t 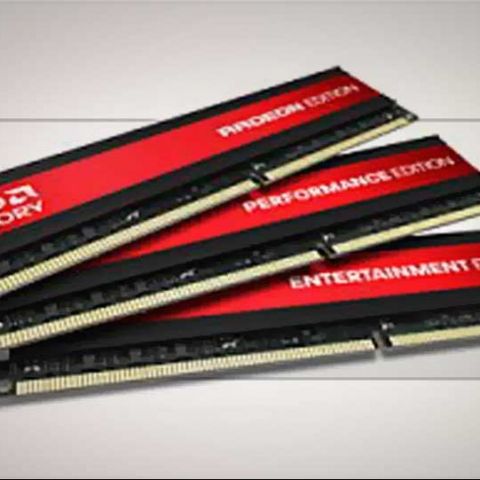 AMD has announced it will start selling AMD Memory, or AMD-branded memory modules, made by partners, in a dual-effort to provide a “holistic customer platform experience” (read AMD Vision), and, ensure customers who are buying AMD processors (whether APUs or CPUs) get the correct sort of RAM to go with it.

The second largest chip maker in the world said that with this move, it also intends to help drive future memory product developments. The company will ensure the RAM it sells is in fine working order, and scales well with AMD platforms, by doing its own testing and validation of the modules in its labs. No ETT (or Effectively TesTed) RAM will be used, further ensuring quality.

Initial partners are Patriot Memory, and VisionTek, who will manufacture the modules, with retail partners like Amazon, Newegg, Fry’s, Best Buy and TigerDirect also lined up. AMD RAM will be available in three series – Entertainment Edition (between 1333MHz and 1600MHz), Performance Edition (at 1600MHz), and Radeon Edition (at a rather slow 1866MHz, though 2133MHz modules are expected later). 2GB, 4GB and 8GB modules will be available, in various kit sizes.

Interestingly, in the case of AMD Radeon Edition memory, the company intends to release AMD OverDrive memory overclocking software alongside, as well as provide support for Intel XMP.

The industry reaction to AMD’s move is lukewarm, with the predominant theme being surprise at why AMD would want to get into the intensely competitive and low-profit-margin world of memory. After all, AMD can’t very well hope to be subsidizing the modules in such a market, giving purchasers less incentive to switch from other established and trustworthy memory brands, like Corsair and G-Skillz.

Also, while the goal of AMD Vision – nearly every component of the machine being AMD-branded – is all well and good, the elaborate caution of not doing away with DDR3 1333MHz RAM is counter-productive, not ensuring efficient scaling for a majority of its most modern configurations, including AMD Fusion APUs and Bulldozer CPUs.

As for pricing and availability, exact India pricing has not yet been revealed. AMD Entertainment and Performance Edition modules should be in most stores by the end of the year, while Radeon Edition kits are expected by February 2012.

Refer to the AMD Memory page for more information, and AnandTech's illuminating article.