The new Samsung Qi-based Wireless Charger is thinner than before and and includes two charging coils instead of three. Just like before, users will be able to place their Galaxy S9, S9+ smartphones both horizontally and vertically on the new wireless charger. 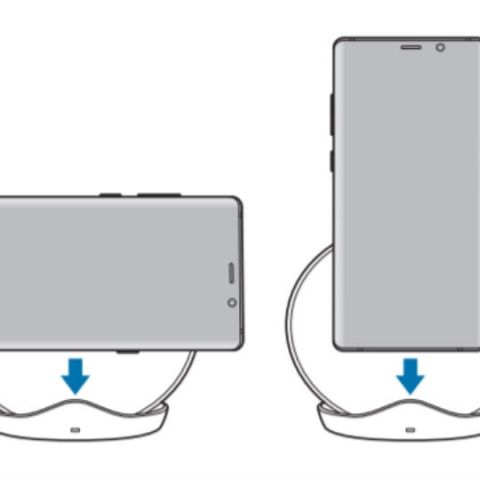 Samsung is just a few weeks shy of launching the Galaxy S9 and S9+ flagship smartphones at the upcoming Mobile World Congress 2018. As the trend has been for the past few years, multiple details about the S9 and S9+ have leaked online thanks to popular tipsters, patent leaks and more. This time, however, an official Samsung company-made user manual may have possibly leaked a new, redesigned Fast Wireless Charger for the Galaxy S9 and S9+. The Samsung manual shows off the new EP-N5100 wireless charger and reveals that it is thinner than its predecessor. Samsung’s EP-N5100 fast wireless charger is expected to feature two internal charging coils as opposed to three found on the Galaxy S8’s wireless charger. Just like before, users will be able to place their Galaxy S9, S9+ smartphones both horizontally and vertically on the new wireless charger.  The new Samsung wireless charger also looks to be foldable, similar to its predecessor and Samsung will continue to utilize the Qi standard for fast wireless charging.

Further, a diagram of the new fast wireless charger from Samsung shows that the device will feature a charging indicator light which will turn Red while charging and Green when the smartphone is fully charged. A flashing Red light will appear when not charging properly due to a general error.

In terms of power, the leaked Samsung fast wireless charger allegedly developed for the Galaxy S9 and S9+ smartphones will support 9V/2A, 9V/1.67A and 12V/2.1A charging, which should provide 18 watts of power on paper, compared to 15 watts delivered by the S8’s EP-PG950 wireless charger. However, an FCC document discovered by WinFuture found that the output of the EP-N5100 fast wireless charger remains below 15 watts. The device will feature a USB Type-C port to connect to a power outlet and an integrated fan at the back to keep the smartphones cool while charging.

As per WinFuture, the new Samsung wireless fast charger will cost approximately 75 euros or Rs 5932, directly converted. Leaked battery details of the Galaxy S9 and S9+ suggest that the phones could pack 3,000mAh and 3,500mAh cells, respectively.

In terms of specs, the Galaxy S9 and S9+ will reportedly sport 5.65-inch, 6.1-inch displays respectively with an 18.5:9 display aspect ratio. They will most likely be powered by the Octa-core Qualcomm Snapdragon 845 SoC in the US and China, and will be running on the company’s own Exynos 9810 SoC in other regions, including India. The smartphones will most likely be launched running on Android 8.0 Oreo and previously leaked renders and images of the smartphones reveal a thin-bezel design.