Another image of the Redmi K20 has appeared in the wild

This time, the image belongs to a promotional poster of the phone

The image shows the Redmi K20’s Flame Red and Blue colour variants, with the selfie camera popping out of the front 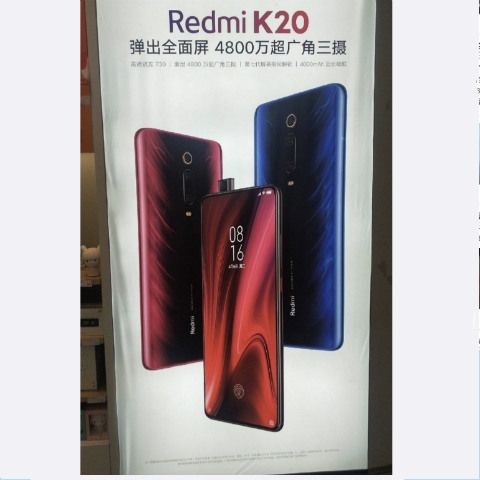 Just days after the Flame Red colour variant of the Redmi K20(₹ 24999 at amazon) was leaked, a new image of the phone’s other colour variant is now doing the rounds on the internet. The Redmi K20 is currently one of the most hotly anticipated smartphones out there since it is touted to bring flagship-grade hardware at an affordable price point. The new image shows off two of the three colours that the smartphone is anticipated to launch in. Besides the Flame Red colour we’ve already seen in previous leaks, the phone is now seen in its ‘Glacier Blue’ avataar, in what looks like a promotional poster displayed at a store in China. The image of the new colour variant was posted on Weibo. Besides the new colour variant, one can also spot the pop-up camera on the Redmi K20 as well as the triple primary camera setup at the back.

The rear panel is seen sporting a triple-camera setup. Expectations are that the triple cameras on the back would include a 48MP main sensor with f/1.7 aperture, a 13MP wide-angle sensor, and an 8MP telephoto sensor. The pop-up selfie shooter is said to be a 20MP sensor.

In terms of colour options, the Redmi K20 could be launched in Flame Red, Glacier Blue and Carbon Fibre Black colours.

The launch of the Redmi K20 is set for May 28 in China. The device is also expected to launch in India, since Xiaomi has been teasing the same on its India social media channels.