Realme 7 series launching on September 3: How to watch, expected features, price and more

Realme is launching the Realme 7 and 7 Pro in India on September 3, here's how to witness the launch live to get instant price and availability details. 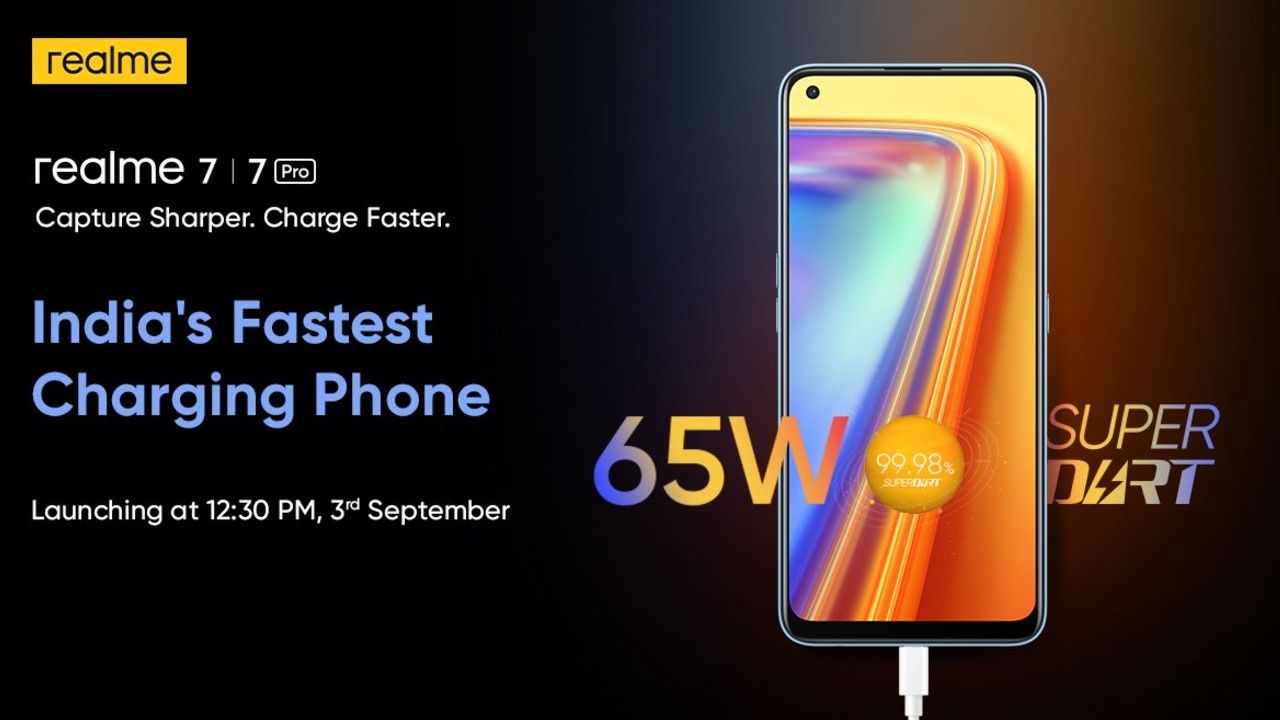 Realme 7 series launching on September 3: How to watch, expected features, price and more

Realme is all set to launch its Realme 7 series of smartphones to rival the Redmi Note 9 series. The new phones are slated to launch on September 3 at 12:30 PM. While a lot of details about the upcoming phones is already leaked, the price and availability details are still a secret. You can watch Realme 7-series launch as it happens to gather all the official updates about the phones.

Wondering how to watch it? Easy. You just have to tune in to any of Realme's social media platforms - Facebook or Twitter. In case you're not on either platform, you can watch it on Realme's official YouTube channel. If you still find it troublesome, just bookmark this link and check it out at 12:30 PM to watch the launch.

The upcoming smartphones are expected to bring features like 65W SuperDart charging, 64MP Quad Camera under an affordable price point. The Realme 7 Pro could be one of the fastest charging mid-range phones if it's priced under Rs 20,000 at launch. So it will be the price that will decide how the new phones compete in the current market.

The Realme 7 key specifications were already leaked online, hours after the Realme 7 Pro feature set was leaked on Twitter. The two leaks bare eveything about the Realme 7 and 7 Pro. Check them out below.

Exclusive: Here are the specifications of the Realme 7.#Realme #Realme7 #Realme7Pro pic.twitter.com/gH5Bt3LMid

Realme 7 is leaked to have a 6.5-inch Full HD+ (2400 x 1080 pixels) display with a 90Hz refresh rate and 120Hz touch sampling rate. It could be powered by a MediaTek Helio G95 chipset paired with 6GB/8GB of RAM and 64GB/128GB of storage options. The Realme 7 is expected to run on Android 10-based Realme UI out-of-the-box. The phone has been leaked to have a 64MP primary camera, an 8MP ultra-wide-angle camera, 2 MP black and white lens and a 2MP macro camera. On the front, there is a 16MP selfie camera, likely housed inside the notch cutout. The rear cameras can record in 4K UHD at 30FPS.

The Realme 7 might have 5,000mAh battery with support for 30W fast charging out-of-the-box courtesy of Dash Charging solution. It also comes with a side-mounted fingerprint sensor instead of opting an in-screen sensor.

Realme 7 Pro specifications were also leaked and is slated to feature a 6.4-inch Super AMOLED screen with a Full HD+ (2400 x 1080 pixels) resolution. It could be powered by Qualcomm Snapdragon 720G chipset paired with 6GB/8GB RAM and 128GB storage. The phones are expected to run on Android 10-based Realme UI out-of-the-box. The Realme 7 Pro might also have quad-cameras on the back having 64MP primary camera, an 8MP ultra-wide-angle camera with 119-degree field-of-view, a 2MP monochrome lens and a 2MP macro camera. On the front, there is a 32MP selfie camera.

The key highlight is going to be its support for 65W fast charging courtesy of SuperDart fast-charging system that debuted on the Realme X50 Pro. The 7 Pro is expected to come equipped with a 4,500mAh battery. It is also said to come with dual stereo speakers and measures 8.7 millimetres in thickness and 182 grams in weight.