Realme will be launching the Realme 7 and Realme 7 Pro at an online event on September 3. 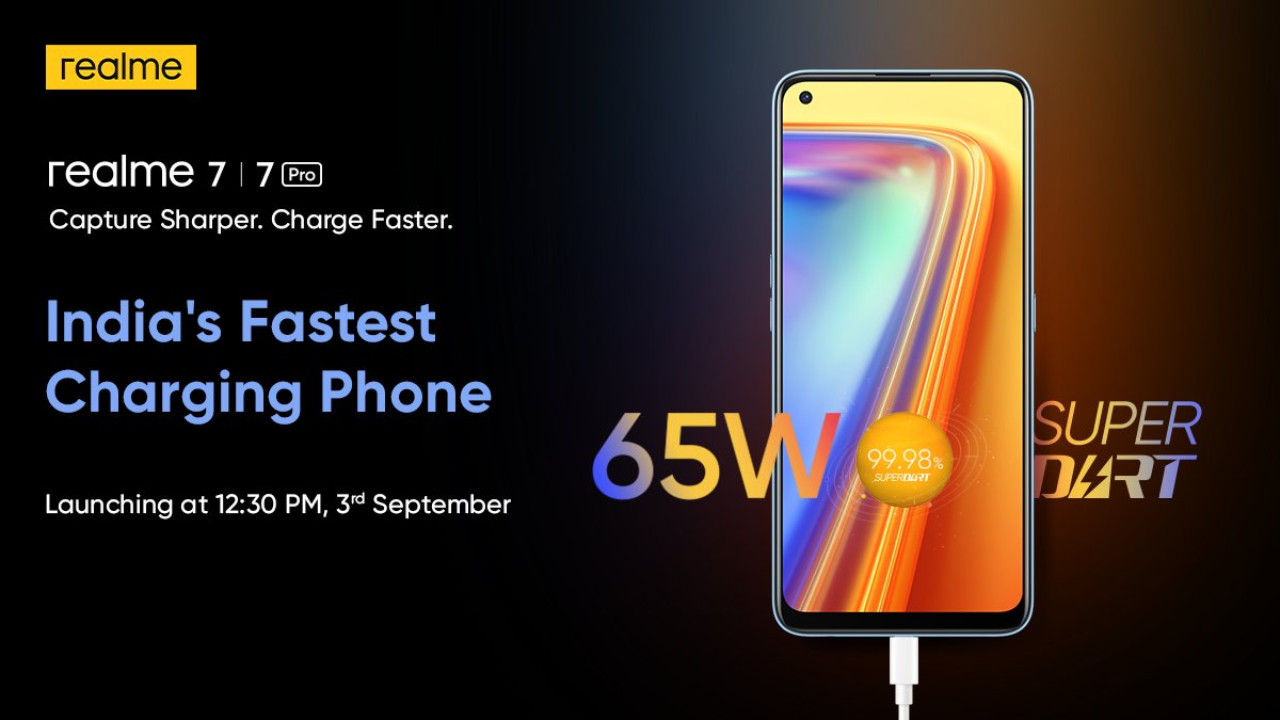 The Realme 7 and 7 Pro smartphones are going to launch in India on September 3 at an online event scheduled at 12:30 PM. The smartphones are already listed on Flipkart, indicating that these will be sold exclusively on the e-commerce platform. The listing also reveals the launch date and some key features of the upcoming mid-rangers.

I enjoyed #BuildingTheFaster7 for you guys.

It's time to unveil #realme7 & #realme7Pro and let you guys #CaptureSharperChargeFaster!

The good news is that India’s Fastest Charging Smartphone now comes to the best mid-range Flagship.

The biggest attraction about the upcoming Realme 7 series is perhaps the support for 65W charging for the first time in this segment. The technology actually debuted on the flagship Realme X50 Pro 5G, and will now be introduced in the under-20k segment. In all likeliness, the Realme 7 Pro will be one supporting the fast charging speeds and if this convinces you enough, you can also place a blind order of the smartphones from today, i.e August 27 to September 2 on the Realme website. Users will have to pay Rs 1,000 to book a unit, and once the remaining balance is paid between September 3 to 15, the smartphone will be shipped to the buyer. Doing so, Realme 7 buyers will get an additional Rs 100 off as coupon to use while purchasing IoT products on the Realme website, while Realme 7 and 7 Pro buyers will get anywhere between Rs 500 to Rs 1,000 off on other products.

The Flipkart listing of the smartphone shows a punch-hole display on the front that debuted in the Realme 6(₹ 12990 at Tatacliq) series. More details about the smartphones will be shared on Flipkart on August 28th, which is tomorrow. But in case you can’t wait to know more, there are leaks and rumours to fill the gap.

Based on previous reports, the Realme 7 Pro will come with a 4450mAh battery, which shouldn’t take more than an hour to top up using the 65W charger. Furthermore, Realme is also all set to shed the vertical camera module at the back, and opt for a rectangular camera module, much like the Galaxy S20 series. The 64MP quad camera stack is expected to make a comeback, and while there’s no confirmation or a leak, it’s unlikely that Realme will dial down the refresh rate after hitting the 90Hz mark with both the Realme 6 and 6 Pro before this.

The chipsets powering the upcoming Realme 7 series is still a mystery. Ideally, the Realme 7 Pro should upgrade to the Snapdragon 730G, while the Realme 7 should choose the next best MediaTek chipset, going by previous trends.

Meanwhile, do revisit our coverage of the Realme 6 Pro to know what to expect from its successor.