Realme has already announced that its next phones will belong to the Realme 5(₹ 11999 at amazon) Series, however, the Chinese company hasn’t revealed anything about the specs and features of the phones belonging to this series. A phone with model number RMX 1911, allegedly called the Realme 5, has now surfaced on the Geekbench database, unveiling key information about the internals of the phone.

As per the listing on the benchmarking website, the phone is powered by a chipset called the “Trinket”, which is said to be another name for the Qualcomm Snapdragon 665 processor. The same processor has been seen in the Mi CC9 and Mi A3 benchmarks in the past. The SoC has a base frequency of 1.80GHz, and is accompanied by 4GB of RAM. The phone clocks 1525 points in the single-core tests, and scores 5948 in the multi-core tests. 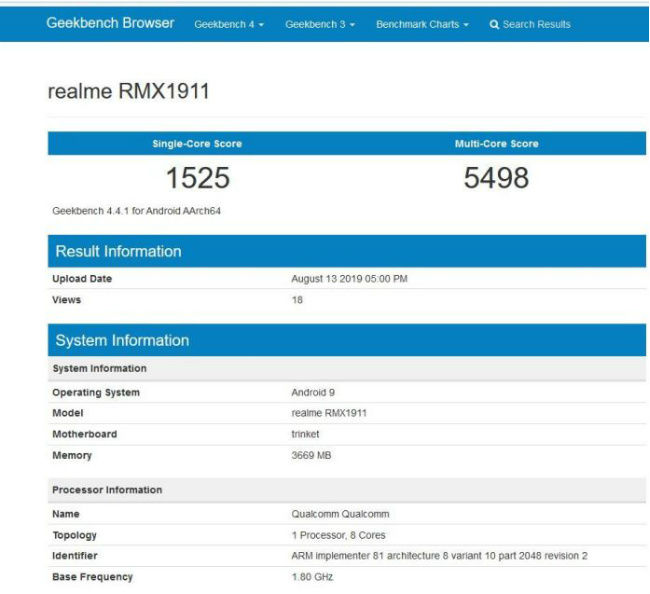 Realme will launch the Realme 5 series of phones at an event in New Delhi on August 20, the phones launched under it will retail on Flipkart. These phones will be the first Realme devices to sport a quad-camera setup with an ultrawide angle lens, super macro lens, and a portrait module. Moreover, the company has now confirmed that the Realme 5 Pro will ship with a 48MP Sony IMX586 sensor as the primary camera sensor.

As  per the information available on Flipkart, the quad camera setup will assist in capturing “perfect” low-light pictures with “a large aperture and pixel size.” The ultra-wide lens comes with 119-degree field of view, and is claimed to capture 1.5 times more area as compared to other lenses. The Super Macro lens is said to come equipped with a 4cm microscopic focal length. The fourth lens will be used to click portrait images.