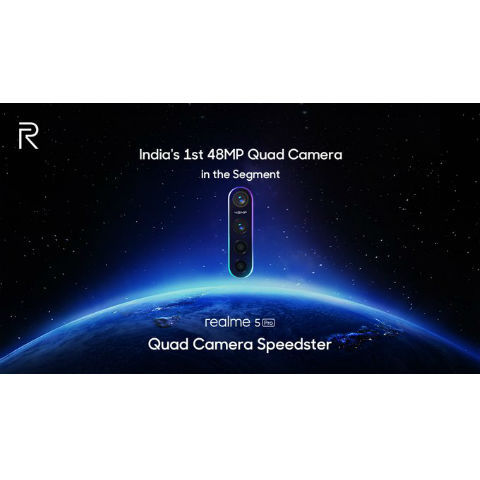 Realme took to Twitter to confirm that the Realme 5 Pro will sport a 48MP primary camera.

The Realme 5 series will launch on August 20 in India

Realme is all set to launch the Realme 5 series of phones at an event in New Delhi on August 20. The company  is using the “Leap to Quad Camera” tagline to let you know that these phones will be the first Realme devices to sport a quad camera setup with an ultrawide angle lens, super macro lens, and a portrait module. Moreover, the company has now confirmed that the Realme 5 Pro will ship with a 48MP Sony IMX586 sensor as the primary camera module.

As  per the information available on Flipkart, the quad camera setup will assist in capturing “perfect” low-light pictures with “a large aperture and pixel size.” Also, the ultra-wide lens with 119-degree field of view, and is claimed to capture 1.5 times more area as compared to other lenses. The Super Macro lens is said to come equipped with a 4cm microscopic focal length. The fourth lens will be used to click portrait images.

Previously, Sheth had announced that Realme was developing a phone with Samsung’s Bright GW1 sensor that has a resolution of 64MP and uses the company’s ISOCELL technology to capture images. We got our hands on a prototype phone, and you can read all about it here.

There is not much known about the Realme 5 series at the moment but expect the company to reveal the features of this pair in the days leading to the announcement next Tuesday.