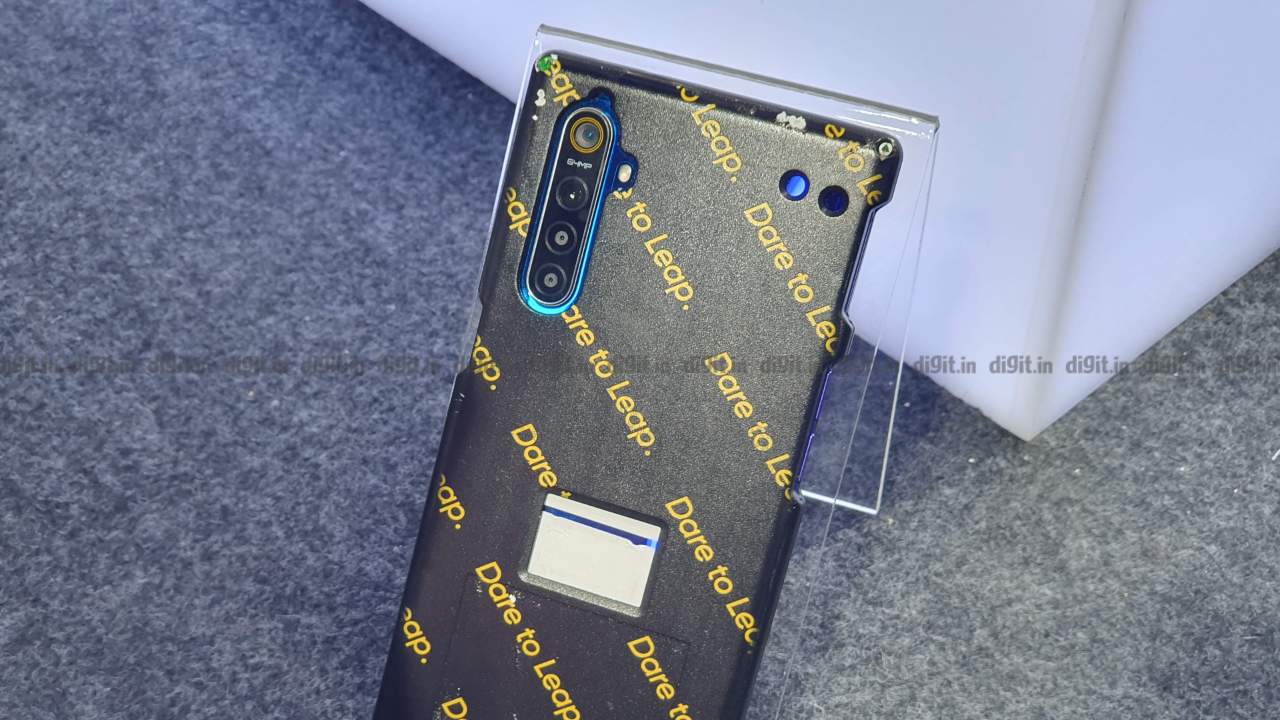 Realme will be launching its first 64MP camera phone before Diwali along with two other phones with quad-camera stacks.

We got to play around with the 64MP camera setup on an unnamed Realme phone at the event.

Realme’s 64MP camera is very much real and having seen it in action, I’m both surprised, and a tad disappointed. Surprised at the sheer cutting edge this young smartphone company is living in, and disappointed because the 64MP camera might just end up in the same bucket as the 48MP sensor. Innovative on paper, but nothing really groundbreaking in real life performance. At an event in New Delhi, Realme disclosed some essential information about the upcoming 64MP camera phones (yes, there are more than one!) and also let the gathered press get their hands on only the camera.

Apart from taking digs at Xiaomi for only announcing a 64MP Redmi phone, Realme promised three smartphones, with at least one of them to launch before Diwali in India with a 64MP camera. One of them is likely to be called the Realme 5 and the other the Realme 5 Pro. The third one is likely to be from the Realme X series. The former two are more or less confirmed as the names were etched on the camera modules in the teaser  graphic. All three of them will supposedly sport a quad-camera setup.

Hands on with the 64MP Quad camera 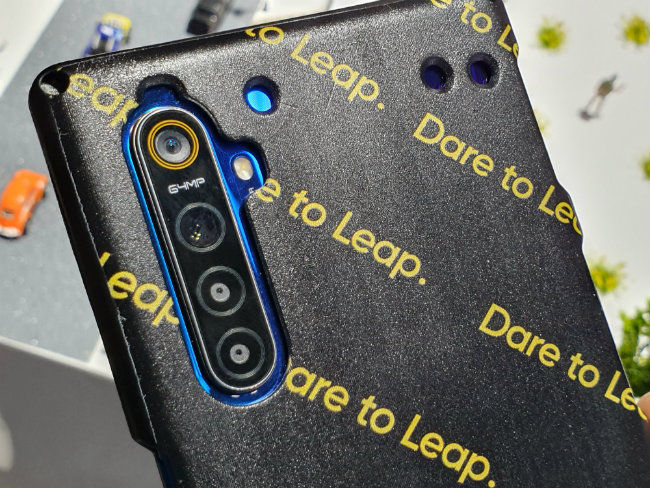 One of the 64MP camera phones were on display at the demo zone at the event, albeit all covered up. Each unit was carefully supervised by company employees and only the camera was allowed to be used. Everything else was a no go. We spent some time with the camera shooting objects arranged by the company and this is what we thought —

The quad-camera setup starts with the ultra-wide camera on top, followed by the 64MP primary camera, then a macro lens and the fourth lens could be a depth sensor to aid in portrait photos. This combination could be shuffled around by including a telephoto sensor into the mix. However, the one on display used the 64MP camera to zoom in first at 2X and then to 5X. The ultra-wide lens wasn’t working on the phone and I was told there’s still work to do. Nevertheless, Realme shared at the presentation that it’d offer a 119-degree wide field of view. The macro lens is more interesting. It can shoot photos as close as 4 centimeters, something that we saw on the Honor 20 more recently.

Realme also said the R&D team are tuning the camera to the quality of the Huawei Mate 20 Pro’s 40MP sensor. When asked why, Chandler from Realme’s imaging team said that was the closest benchmark they had. Indeed, the 40MP camera on the Mate 20 Pro has a sensor size of 1/1.7”, same as the 64MP camera. Only the pixels are much smaller on the latter, allowing the sensor to pack in more pixels. The result proved impressive, with excellent detail retention when you zoom into objects far away in the frame. But then, if you have used a 48MP camera phone, you might not find it all that astounding.

How does the 64MP camera work?

The sensor itself is following the same principle which the 1/2” 48MP camera is based on. Both the Samsung GW1 64MP sensor and the GM2 48MP sensor uses Samsung’s Tetracell technology where the pixels change in size depending on the lighting conditions. The sensors have pixels of the same colour filter aligned side-by-side in groups of four. During daytime the sensor sticks to the conventional RGB pattern to shoot photos. But in low-light a remosiac algorithm groups four pixels with the same colour filter into one to create a large 1.6um superpixel which is able to capture more information. Only, there are around 16 million more pixels on the 64MP camera sensor than the 48MP sensor.

Ideally, that should allow for higher dynamic range while shooting high-contrast frames, but the demo zone, well-lit from all sides, wasn’t the best place to test it. What we did test was the ability to capture details. More megapixels means you can essentially crop photos without pixellating them, up till a point. This point is much higher when shot in the 64MP mode, even more than the 48MP mode. However, the unit we got to test the camera had the same problem we had spotted in most other 48MP cameras. The high amount of detail is only restricted to a small radius where the focus was. The rest of the area remains blurred with smudged details. Also, places where there are lots of details concentrated come out smudged. Yet, the camera seems to be quite adept at reproducing text placed far away. It could likely be an optimisation issue. This is still a work in progress. In fact, we have seen great improvement in the 48MP camera sensor used in the Redmi K20 Pro as compared to the Note 7 Pro, so I’d keep my hopes alive. Indeed, when compared on a custom MTF chart used for measuring spatial and radial performance of lens-sensors, the Realme phone could produce finer details than the K20 Pro. 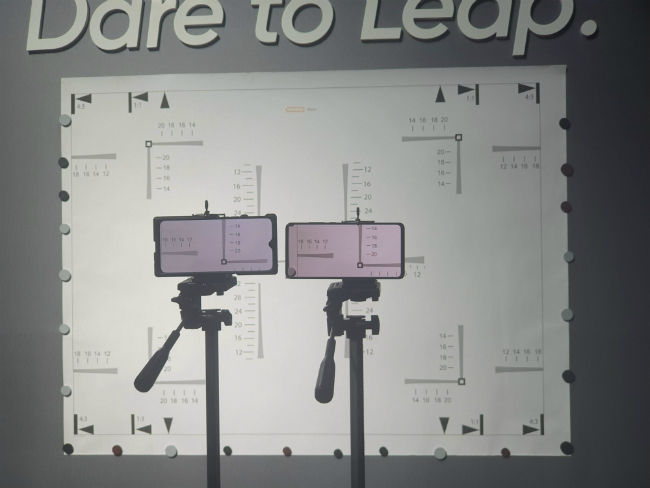 Next, we tested the macro lens. Based on the exif info, it has a 2MP resolution, which is enough for macro shots. It did let me shoot very near to the subject, but there’s a lot of barrel distortion, resembling a fish-eye lens. The details also come out fine, as long as you don’t zoom in. The 2MP resolution won’t let you crop the photo to a large extent. As for the zoom performance, the unit on show relied on the 64MP sensor to achieve 2X and 5X zoom. In both cases, the details seemed to be well-preserved. There was an expert mode which didn’t allow you to shoot RAW. Someone from the Realme camera team told me they are deliberating on the option to include it. Yes, the sensor can capture RAW images. There’s also a nightscape mode which should theoretically perform better, but we didn’t get a chance to test it owing to the well-lit area.

If priced right, the 64MP camera phone could just become the de-facto choice for a camera phone. Realme has a history of undercutting its competitors in both the hardware and the price. It already has the high-resolution camera on its side, now it remains to be seen where Realme will position the upcoming series of 64MP camera phones. Remember Redmi and other OEMs  are also working on 64MP camera phones, and Xiaomi has already announced a 108MP camera phone is also on its way.