The OnePlus Nord is confirmed to be powered by the Snapdragon 765G. The Snapdragon 765G is Qualcomm’s first chipset with an integrated 5G modem. In terms of hierarchy, it’s the most powerful mid-range SoC offered by Qualcomm, right now.

The OnePlus Nord is probably 2020’s most hyped smartphone with the company talking about a new beginning with the new lineup, one where they remain true to their ‘never settle’ mantra, but also make things affordable at the same time. While we still don’t have a confirmed launch date for the phone, OnePlus co-founder Carl Pei just confirmed the phone will be powered by the Qualcomm Snapdragon 765G.

In an interview with TechRadar UK, Carl Pei confirmed that the mid-tier chipset from Qualcomm is going to be the one powering the new smartphone.

“We’ve been looking at the mid-range smartphone market for a while. It’s just that we felt like the technology wasn’t really there to be able to create a mid-range product that also lives up to our ‘Never Settle’ philosophy. But we’re pretty confident that this time around the OnePlus Nord will do just that,” Pei said in the interview.

The Snapdragon 765G is Qualcomm’s first chipset with an integrated 5G modem. It also sits right below the flagship Snapdragon 865 and borrows a host of flagship features from the chipsets in the 8-series. In terms of hierarchy, it’s the most powerful mid-range SoC offered by Qualcomm, right now.

What does the Snapdragon 765G bring to the table? 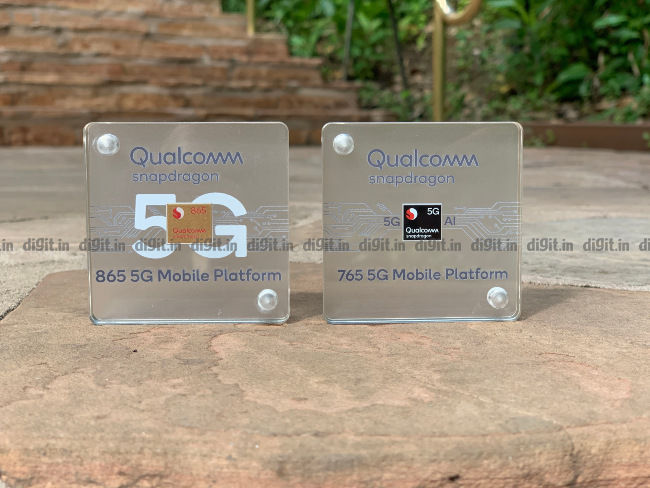 The Snapdragon 765 and 765G was unveiled alongside the Snapdragon 865 last year in December at the Snapdragon Tech Summit in Hawaii. The chip was introduced to offer premium mobile experiences and 5G connectivity to a larger audience.

Based on a 7nm manufacturing process, the chip features a 1+1+6 CPU core architecture with one Cortex-A76 prime core clocked at 2.4GHz, another Cortex-A76 mid-core clocked at 2.2GHz and six Cortex-A55 efficiency cores clocked at 1.8GHz. The chip also comes with the Snapdragon X52 5G modem integrated into the system, and an Adreno 620 GPU.

The biggest highlight of the chipset is the AI Engine and the CV-ISP, which Qualcomm claims is faster and smarter and 4 times more power-saving than a standard ISP. Considering the focus of the OnePlus Nord is going to centre around a flagship camera, having the Snapdragon 765G was necessary.

The chipset will also draw in gamers. The G in the name means it’s optimised to support some of the Snapdragon Elite Gaming features that include proprietary algorithms to reduce janks in games, make the games load faster and handle network latency better.

What to expect from the OnePlus Nord?

"With the OnePlus Nord we're bringing a flagship-level camera to the mid-range price range, which I think consumers are going to be really excited by," Pei said in the interview.

That’s something to look forward to, even though the camera hardware is unconfirmed at this point. However, sometime in the past, some users in India reportedly received a survey from OnePlus that leaked out the specs of the smartphone. That included a 64+16+2MP triple camera stack. If true, it could be yet another combination of camera sensors from OnePlus. At the same time, the 64MP camera sensors have been offered in mid-range smartphones for quite some time now.

This is where the Snapdragon 765G can make things more interesting. The chipset comes with a dual 14-bit Spectra 355 ISP  and supports up to 192MP cameras. The ISP is also capable of capturing 4K HDR videos with a portrait mode with 10-bit colour depth. The chip is also capable of delivering up to 120Hz refresh rate at FHD+ resolution and support both Dolby Vision and HDR10+.

The choice of SoC from OnePlus certainly opens up a lot of possibilities. But, it remains to be seen just how much of it is utilised in the OnePlus Nord.