Snapdragon 865 detailed: AI, camera and gaming in focus this year

Qualcomm announced more details about the Snapdragon 865. The chipset does not come with an integrated 5G modem as many predicted. While the CPU and GPU saw expected incremental upgrades, the real innovations this time were in the ISP and AI Engine. 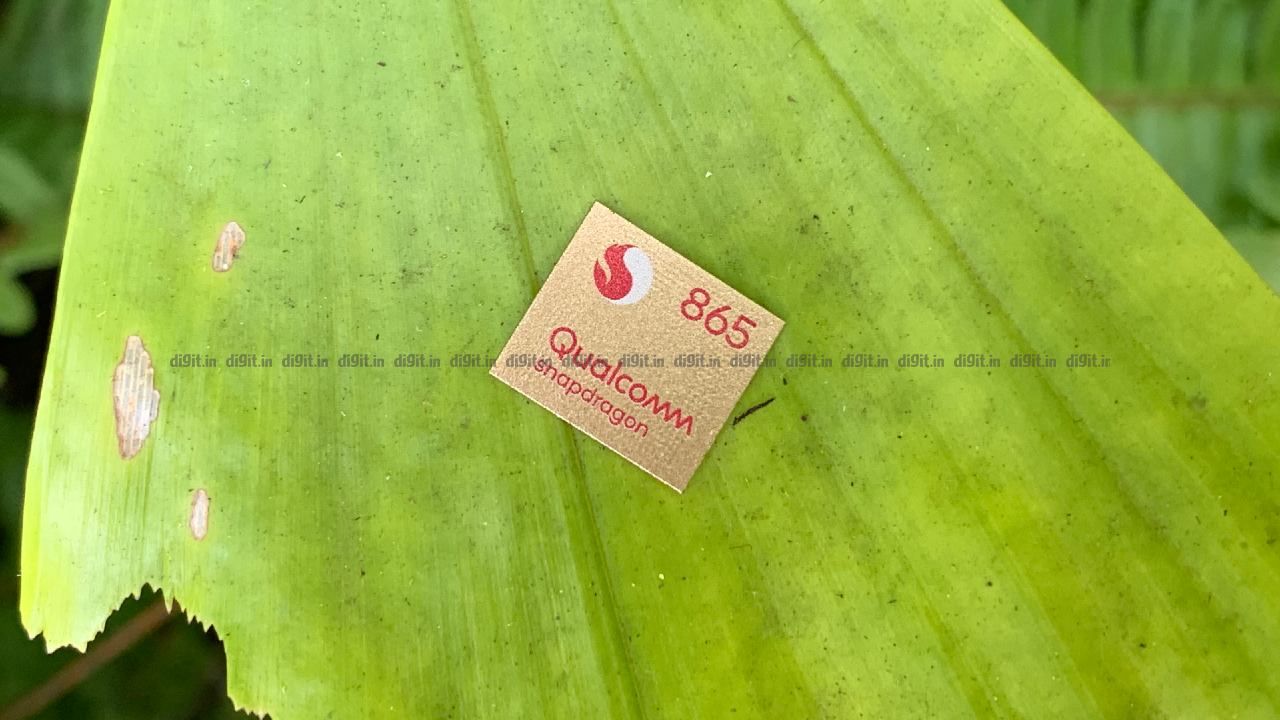 Snapdragon 865 detailed: AI, camera and gaming in focus this year

After teasing some of the features on Tuesday, Qualcomm dropped more details about the Snapdragon 865 and Snapdragon 765 SoCs on Day 2 of the company’s tech summit. Based on the details Qualcomm shared, it feels like the Snapdragon 865 is more of an incremental upgrade as far as the CPU and GPUs are concerned. However, as Qualcomm drilled it down the audience, the real innovation this year was achieved in AI compute, image processing and gaming.

The Snapdragon 865 is manufactured on TSMC’s 7nm N7P process, the same process that is used to make Apple’s A13 Bionic chipsets. 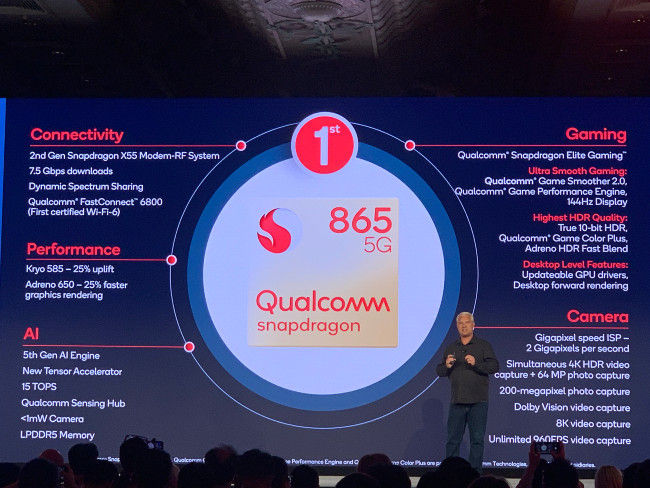 Let’s get down to the details of the Snapdragon 865 - 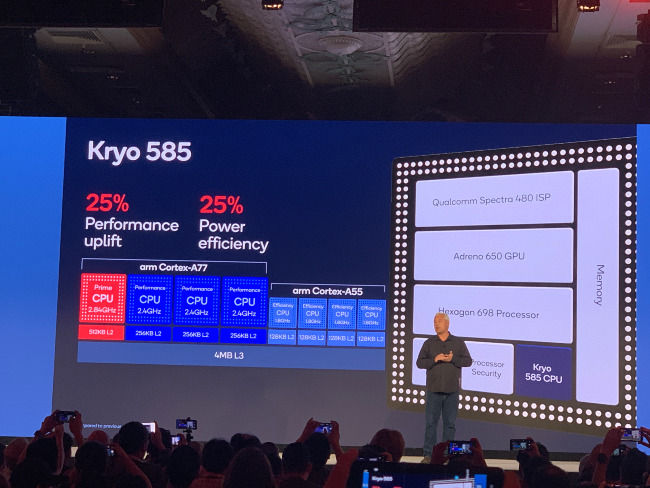 Starting with the CPU sub-system, the Snapdragon 865 uses new Kryo 585 cores based on the Cortex-A77 and Cortex-A55 cores. The sub-system architecture is the same as last time, and so are the peak frequencies for each cluster. There’s one prime core, three mid-cores and four efficiency cores. The peak frequency of the prime core remains at 2.84GHz while the mid-cores run up to 2.4GHz and the efficiency cores run at 1.8GHz. Despite that, Qualcomm is claiming a 25 percent performance boost and a 25 percent higher power efficiency. More interestingly, the CPU has twice as much L3 cache. 4 MB worth, which Qualcomm felt is needed so that high-intensity 5G use-cases doesn’t choke the pipeline. There’s now support for LPDDR5 memory but Qualcomm is also retaining support for the previous generation memory. 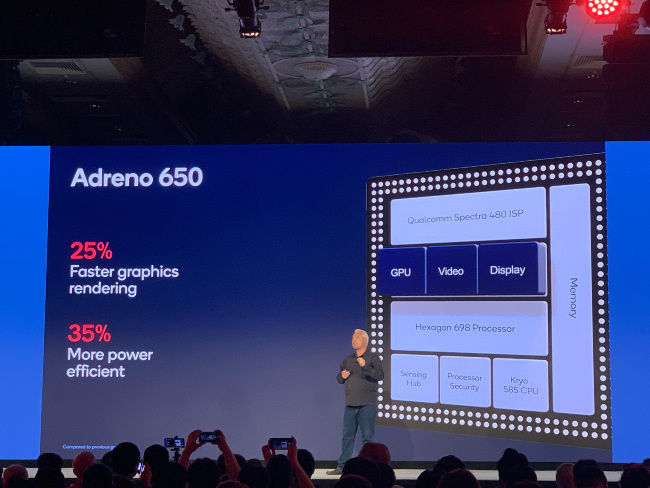 The Adreno 650 GPU now supports 144Hz displays and is 25 percent faster in rendering graphics. Qualcomm also claimed a 35 percent boost in power efficiency. More importantly, the GPU is now more tightly integrated in the AI Engine, sharing AI tasks with the DSP and the CPU. A big change this time is the fact that Qualcomm will push out updates to GPU drivers via the Google Play Store. The GPU now supports 10-bit HDR and 90 FPS gaming. There’s also across-the-board improvement in how the GPU can render shadows, lights, depth of field, motion and reflection in games. These are all part of Qualcomm’s Elite Gaming features that made a push for desktop-like experience in gaming this year. More on that later. 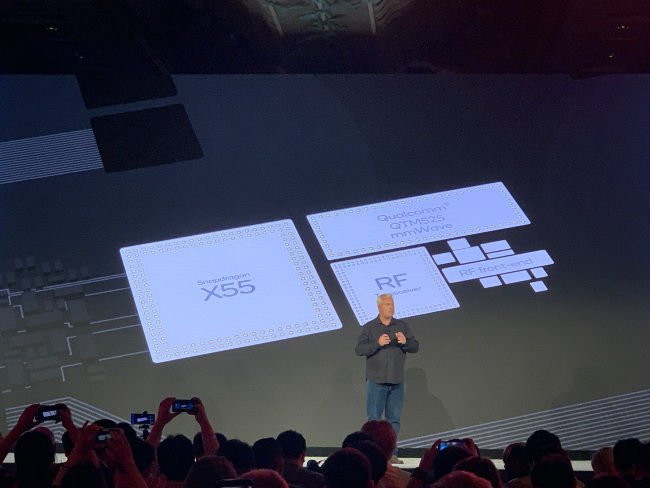 Moving on to connectivity, this was the biggest surprise of the event. For the longest time, analysts and media predicted Qualcomm will integrate the 5G modem with the SoC. That didn’t happen this year with the premium-tier Snapdragon 865. Qualcomm did do that with the Snapdragon 765 and the 765G, but on the Snapdragon 865, it’s still the modular approach from last year. There’s a new 5G modem though, called the Snapdragon X55. The X55 5G modem also has backward support for 4G, 3G and 2G and supports Dynamic Spectrum Sharing which Qualcomm claimed will be a stepping stone for a lot of telecom operators towards real 5G.

As to why Qualcomm did not integrate the modem with the SoC, we’re not really sure. Qualcomm said it will help OEMs reduce their development cycle, which because of 5G is expected to be a lot longer. It’s not really a technical incapability on the part of Qualcomm but more of a pragmatic decision to help OEMs take devices to market quicker in the face of complex 5G technologies. As a result, the X55 5G modem comes with its own RF-system. 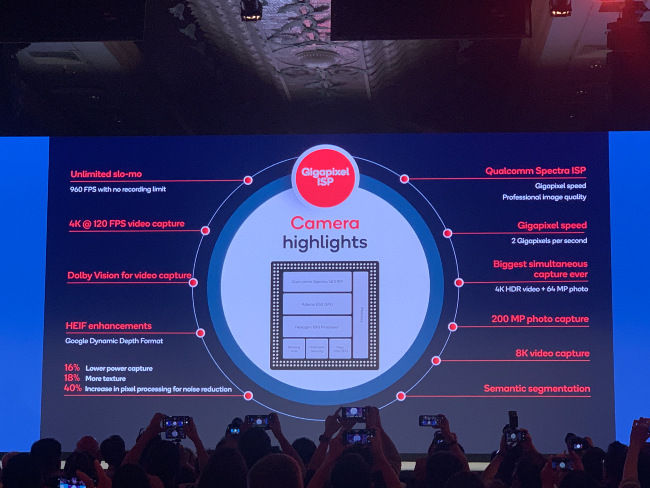 Next, the Snapdragon 865 integrates the new Spectra 480 ISP. This is also one place which saw big gains, essentially making us a lot more excited about the smartphone cameras that are coming in 2020. For one, the ISP supports 200MP camera sensors which Qualcomm said is in the works and will be out next year. Then, the ISP supports 8K video recording at 30 FPS, unlimited 960 FPS slo-mo recording and simultaneous 4K HDR capture and 64MP snapshot. These are impressive feats that is primarily achieved by a big architectural change. For one, the new ISP can process 4 pixels per clock from 1 pixel per clock. This allows the ISP to crunch 2 gigapixels data per second. A big announcement this year was the support for Dolby Vision video capture, something we expect flagship smartphones of 2020 to tout as a marquee feature. When launched, these smartphones will be the first of their kind to capture live Dolby Vision HDR videos as all previous Dolby Vision content has been achieved in post-production. There’s also a dedicated core for noise reduction for better low-light photos and videos. 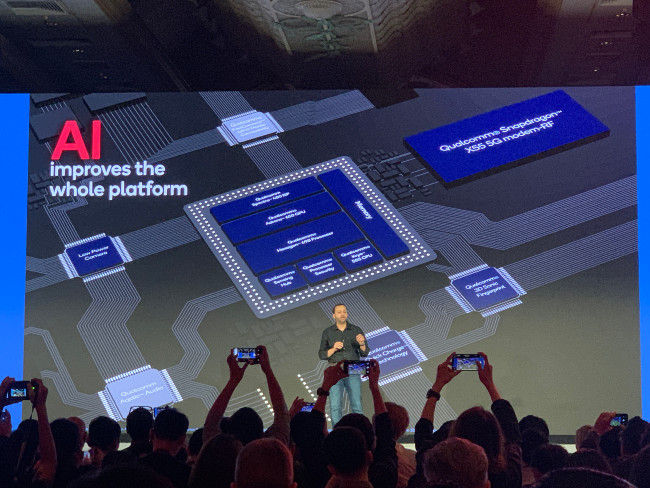 Most of these camera features we mentioned above is achieved in tandem with the 5th-gen AI Engine. Unlike its competitors, Qualcomm doesn’t restrict AI computing to dedicated cores. Instead, it distributes the workload across the CPU, GPU and the DSP. This time though, the benefits of the AI Engine is felt across the board, from the camera to the modem. As for numbers, the AI Engine is 2X more powerful with the capability to deliver 15 trillion operations per second (TOPS) as compared to 7 TOPS in the Snapdragon 855 last year. The increased speed now helps in on-device AI crunching which will find application in things like live transcription and translation. We saw a live demo of this at the keynote. The AI Engine will also allow in-call translation, with the voice signatures included. For instance, an English speaker will be able to hold a conversation with a Chinese speaker over a phone call, with his accent and intonations. There’s a new software stack to enable new AI use-cases. We saw demos from some of Qualcomm’s partners like Snap Inc, loom.ai, and the likes where live filters were applied instantly with zero lag.