The new OnePlus 9 Pro leak reveals some key specifications, and also adds weight to the possibility of its existence alongside the upcoming OnePlus 9.

The new OnePlus 9 phones are expected to launch in mid-March, and the anticipation among Indians is as high as always. Rumours indicate that there will be three models of the phone - OnePlus 9, 9 Pro, and a cheaper 9E/9Lite/9R. You can get all the scoop about the upcoming OnePlus 9 series here.

Coming back to the latest leak, a Greek publication Techmniacs.gr has shared screenshots of the 'About Phone' screen and camera app of the OnePlus 9 Pro. As per the screenshot, the OnePlus 9 Pro will have a 6.7-inch Fluid AMOLED display with a 120Hz refresh rate. The information is already known that it will have a Snapdragon 888 chipset. However, it does reveal that is paired with 8GB of RAM and 128GB of storage. 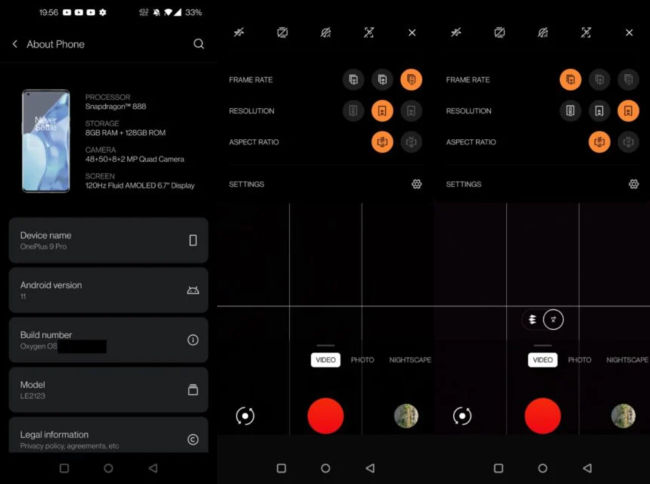 Lastly, it also revealed that the OnePlus 9 Pro will run Android 11 out of the box.

While the first screenshot reveals some of the specifications, the other two images show that there could some tweaking in the camera app's design. As per the image, the settings menu has been moved to the top and from the bottom. The redesigned video settings menu will allow users to switch between frame rates, resolutions, and aspect ratios.

That's all that the new leak has revealed about the OnePlus 9 Pro. With the launch date approaching, we're likely to see more details of the phone pouring in.