OnePlus 8T Cyberpunk 2077 special edition is confirmed to launch on November 2 in China. OnePlus has been teasing this special edition of its latest flagship smartphone from quite some time now and earlier today revealed the official launch date of the phone. OnePlus has collaborated with CD Projekt Red for the Cyberpunk 2077 that has been now delayed by 21 days and will now release on December 10.

According to a post shared by OnePlus on Weibo, the OnePlus 8T Cyberpunk 2077 special edition is expected to feature a redesigned camera module along with red accents along the frame. The camera module seems to have increased in size and has “2077” imprinted on it. The phone could also have a revamped back panel to match with the game’s theme but apart from we don’t expect any major hardware changes. 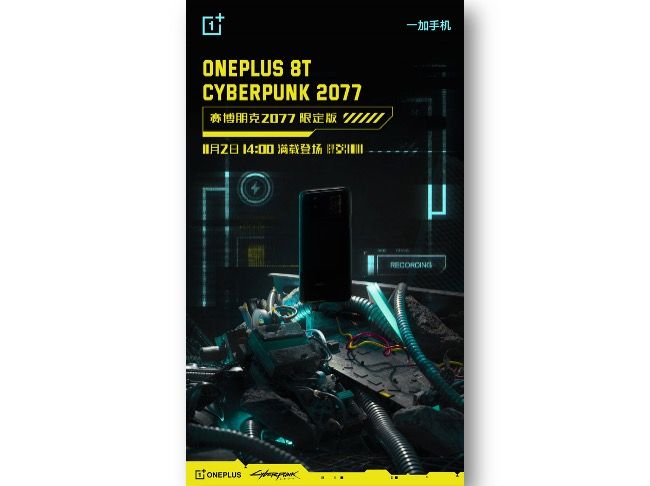 As of now, the OnePlus 8T Cyberpunk 2077 special edition is set to make its debut in China on November 2 at 2 PM, but there’s no word of the phone making it to other regions anytime soon. Having said that, we expect OnePlus to make an official announcement regarding this on the day of the official launch.

OnePlus 8T was launched on October 14 in India starting at Rs 42,999 with a high-refresh-rate display, 65W fast charging and OxygenOS 11 to boot. You can read our review of the OnePlus 8T here.

OnePlus 8T features a 6.55-inch Full HD+ (2400 x 1080 pixels) resolution flat-display with a 120Hz high refresh rate. There is a punch-hole cutout in the top-left corner for the selfie camera.