OnePlus 8T has officially launched in India as the successor to the OnePlus 7T but this time it’s riding solo as there’s no OnePlus 8T Pro to tag along. The OnePlus 8T has an upgraded feature set, something that has been teased heavily in the run-up to the launch. The 8T sits firmly between the OnePlus 8 and OnePlus 8 Pro that launched in April earlier this year and offers a clean and smooth experience that OnePlus phones are known for.

OnePlus 8T brings several upgrades in the form of 120Hz refresh rate display that we saw earlier on the OnePlus 8 Pro, sans the curved edges. Additionally, the phone is the first of its kind in the company’s portfolio to bring 65W fast charging to the table and runs on the latest Android 11-based OxygenOS 11 out-of-the-box.

Get ready for Ultra Smooth Scrolling and Ultra-Fast Charging.#OnePlus8T5G pic.twitter.com/8AKBN92Vzp

OnePlus is hosting an early access sale from 12 AM IST on October 16 where Amazon Prime members and OnePlus Red Cable Club members can buy the OnePlus 8T. The phone goes on its first open sale from October 17 across Amazon India, OnePlus India store and offline stores. 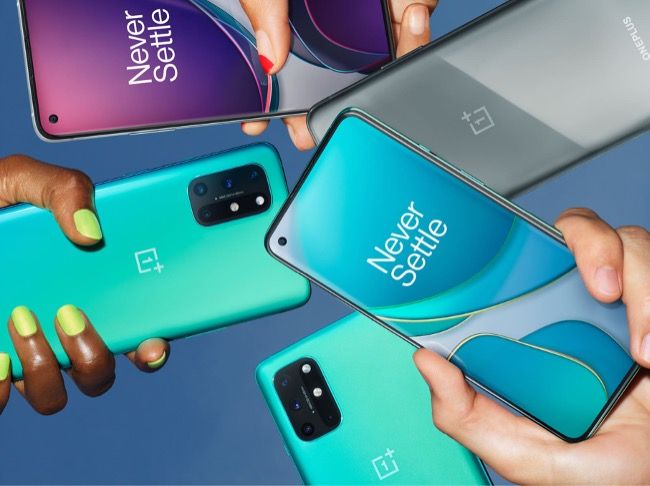 OnePlus 8T has a metal-glass sandwich construction that measures 8.4 millimetres in thickness and weighs 188 grams. Both the front and the back panels are layered with Gorilla Glass for added protection against regular wear and tear. The phone has a newly designed rectangular camera module, a first for the company, that houses the four cameras. It is being offered in two colours-- Aquamarine Green and Lunar Silver.

OnePlus 8T features a 6.55-inch Full HD+ (2400 x 1080 pixels) resolution display that uses an AMOLED panel with a 120Hz refresh rate. There’s a punch-hole cutout in the top-left corner and the display is HDR10+ certified and supports sRGB and DCI-P3 colour gamut range. The phone is also equipped with an in-display fingerprint sensor.

The 8T is powered by the same Qualcomm Snapdragon 865 processor that we have seen and tested on the OnePlus 8 series with X55 modem that brings in 5G support and Adreno 650 GPU. This is paired with upto 12GB LPDDR4X RAM and upto 256GB UFS 3.1 storage options to choose from. It runs on OxygenOS 11 out-of-the-box which is based on Android 11 with features like always-on display, zen mode 2.0, revamped design and dark mode.

OnePlus 8T is equipped with a quad-camera setup on the back that consists of a primary 48MP camera with Sony IMX586 sensor and f/1.7 aperture. This is followed by a 16MP ultra-wide-angle camera with 123-degree field-of-view, a 5MP macro camera and a 2MP monochrome lens. The primary camera supports OIS that assists in recording 4K UHD videos at upto 60FPS and super slow-motion videos at upto 240FPS. The camera app offers features like video nightscape, video portrait and Pro mode, to name a few.

On the front, there’s the same 16MP selfie camera that uses Sony IMX471 sensor with an f/2.4 aperture. The front camera can record 1080p videos and also helps in face unlock and more.

OnePlus 8T is equipped with a 4,500mAh battery with support for 65W fast charging courtesy of Warp Charge 65. The company has extensively detailed its 65W fast charging solution previously and you can read all about it here. OnePlus claims that its new fast-charging standard can charge the OnePlus 8T from 0-100% in just 39 minutes.