The leaked CAD renders of the Nokia 5.1 Plus tip at the presence of a notch on top of its display, similar to the recently launched Nokia X6 smartphone. 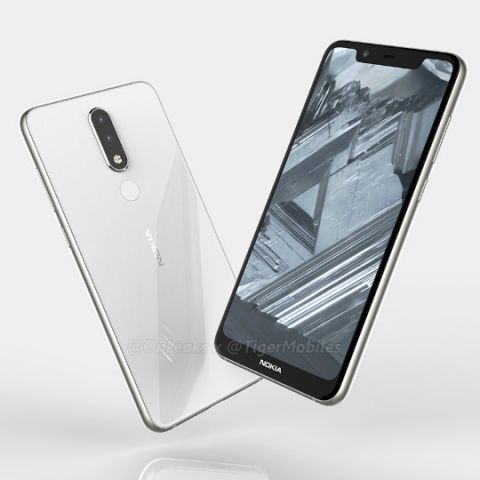 Nokia recently announced its new lineup of devices that include the Nokia 2.1, Nokia 3.1 and the new Nokia 5.1. However, it seems that the company is already working on a Plus variant of the Nokia 5.1 and as per a leaked CAD render of the device, it might come with a ‘notch’ display. In terms of design, the Nokia 5.1 Plus looks similar to the Nokia X6 with a screen size of 5.7-inch and a vertically stacked dual rear camera setup. Alongside the renders, @onleaks and TigerMobiles have also posted a video of the device.

If the renders are accurate, then the notch on the Nokia 5.1 Plus will be slightly wider than the one we have seen on the Nokia X6. Even though there are minimum side bezels, a thick chin is present on the device’s front. The volume rockers and the power button is placed on the right edge of the smartphone, while the USB Type-C port sits at the bottom edge with a speaker module on its right. There could also be a 3.5mm audio jack on the top edge of the device. On the rear, the handset features a dual camera setup with a flash and below it sits a fingerprint sensor. The antenna lines are visible on the top and bottom of the device and the rear panel looks like it is made from glass but it’s difficult to confirm this from the video.

The report doesn’t mention any specs of the device but it’s expected to be a mid-range device that could sport lower configuration in comparison with the Nokia X6. An earlier report tipped that Nokia is working on Snapdragon 710 powered device called “Phoenix” and it could be the upcoming Nokia 5.1 Plus smartphone.

As mentioned above, Nokia recently announced its refreshed lineup of entry-level and mid-range smartphones, the Nokia 2.1, Nokia 3.1, and the Nokia 5.1. The Nokia 3.1 and the Nokia 5.1 have received a design overhaul and they now feature a taller 18:9 display aspect ratio. Both smartphones run on Android Oreo and are a part of the Android One program. The new Nokia 2.1 comes with bumped up hardware specifications and runs on Google’s lightweight Android Oreo (Go Edition). You can read more about the devices here.