Moto G6 Plus build, design and all colour models leaked in renders ahead of MWC 2018

The Moto G6 Plus is seen featuring an 18:9 display aspect ratio and will reportedly be launched in Gold, White, Blue, Silver, and Cyan color variants. 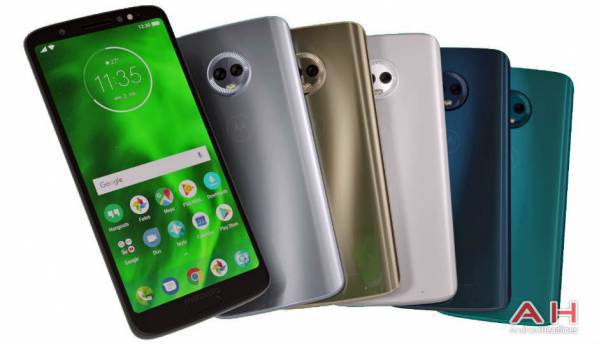 It’s speculated that Lenovo might unveil its 2018 lineup of G6 series smartphones at the Mobile World Congress 2018. The codenames of the three smartphones leaked yesterday and now fresh renders of the Moto G6 Plus have surfaced online, via AndroidHeadlines, which reveal the build and design, and all the colour models it could be launched.

As per the renders, the Moto G6 Plus will sport a thin-bezel design and might feature a metallic build with a curved glass back. It is also seen featuring a dual rear camera setup which is supplemented with a dual LED flash and the camera module is akin to the one seen on the Moto X4. The smartphone will launch in Gold, White, Blue, Silver, and Cyan color models, says the report. The fingerprint scanner is seen on the front and is in line with the ongoing rumours.

The Moto G6 Plus is speculated to feature a 5.7-inch Full HD+ display with a resolution of 2160 x 1080 pixels and it could be powered by the Qualcomm Snapdragon 630 SoC. It might be backed by a 3250mAh battery and launch running on Android 8.0 Oreo. The smartphone is seen featuring soft navigation buttons and the power button and the volume rockers could be placed on its right edge.

The Moto G6 Plus is expected to launch along with the Moto G6 and the Moto G6 Play at MWC.  A previous report tipped that the Moto G6, G6 Plus and the G6 Play are codenamed Blaine, Teller and Ashley respectively. The Moto G6 Play was also spotted on Geekbench and as per the listing, it could equipped with a Snapdragon 430 chipset and 3GB RAM . It is also expected to run on Android 8.0 Oreo and scored 1801 points in multi-core performance and 472 in single-core test. The smartphone might feature an 18:9 display aspect ratio with a Full HD+ resolution of 2160 x 1080 pixels and it could be backed by a 4000mAh battery.