A few weeks ago, LG Electronics teased a new mid-range W-Series on Amazon India, and it is now confirmed that the LG W10 will be the first smartphone of the line-up. The phone has now appeared on Google Play Console as well as on the Android Enterprise listing, revealing its key specifications. As per the listings, the phone will be powered by a MediaTek Helio P22 mobile platform, and will feature 3GB RAM.

According to the Google Play Console listing, the LG W10 will have an Octa-core processor with four ARM Cortex-A53 (2000Mhz) and an equal number of ARM Cortex-A53 (1500Mhz) cores. As mentioned, the CPU will assisted by 3GB of RAM and the phone will come with 32GB storage. As of now, there is no concrete information about any other RAM or storage variant. Given the Indian market’s dynamics, the phone could launch in multiple variants. 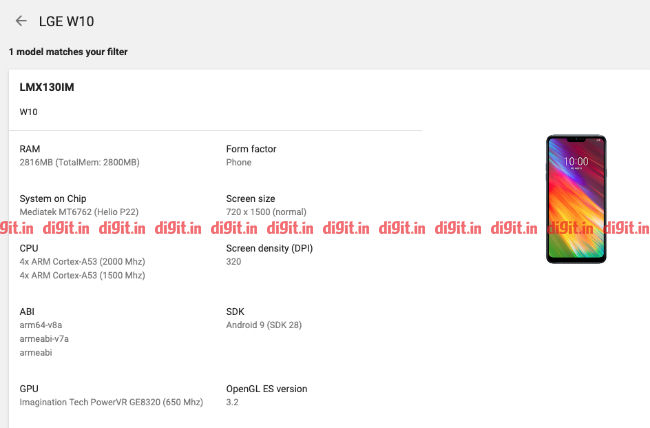 The RAM capacity is verified by another listing on the Android Enterprise webpage. It says that the phone will sport a 6.2-inch display that will offer 720x1500 pixels resolution. The screen density will be 320dpi. The phone runs on Android 9 Pie. All these details match the listing on the Google Play Console. It’s just a matter of time before we learn more about the upcoming LG handset. 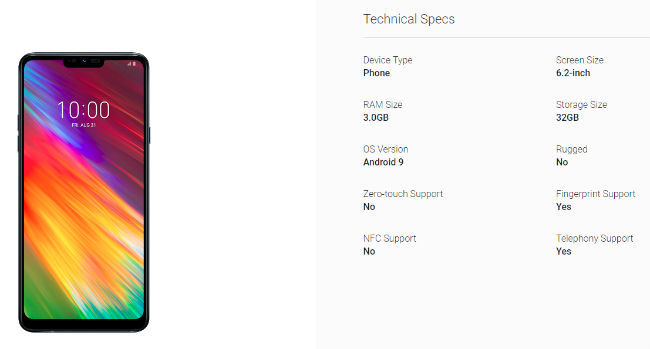 As mentioned, LG first teased the W-Series on Amazon India website. In that teaser, the South Korean company showed a device with a triple camera setup, and a fingerprint sensor on the back. There is a single front camera sensor housed in a notch, which can be seen in the phone's image posted on the Google Play Console and Android Enterprise listing. However, it’s not confirmed that the phone teased on Amazon is the same one listed on Google’s websites.

Further, the company also mentioned that the phone will have a “pocket-worthy price tag.” With statements like “Finally a smartphone you won't have to break your bank for” and “Never before prices,” it seems that the company is going to keep the price very competitive. With mid-range hardware, the LG W10 could compete with the likes of Samsung Galaxy M30 and Redmi Note 7 Pro in the Indian market.