LG’s second flagship device for the year, the V30 has been spotted on benchmarking website Geekbench. As per the listing, the phone may be powered by Qualcomm’s flagship platform, Snapdragon 835 with 4GB of RAM. While the device’s predecessor, LG V20 was the first to come with Android Nougat out of the box, it seems like the same privilege may not be extended to the LG V30. The device is listed as running Android Nougat v7.1.2 not Android O. In the single core test, the phone scored 1899, while it scored 6350 in the multi core test.

The LG V30 is tipped to launch at IFA 2017, which is scheduled to be held between September 1 and September 6. Back at I/O 2017, Google inadvertently confirmed that the phone would feature an OLED display. While talking about its VR platform, Daydream, Google noted that an upcoming LG smartphone would be compatible with it. The requirements for Daydream are almost certainly adhered by OLED panels only and not LCD. All Daydream compatible phones such as the Pixel, Galaxy S8 and the newly launched ZenFone AR come with AMOLED displays. 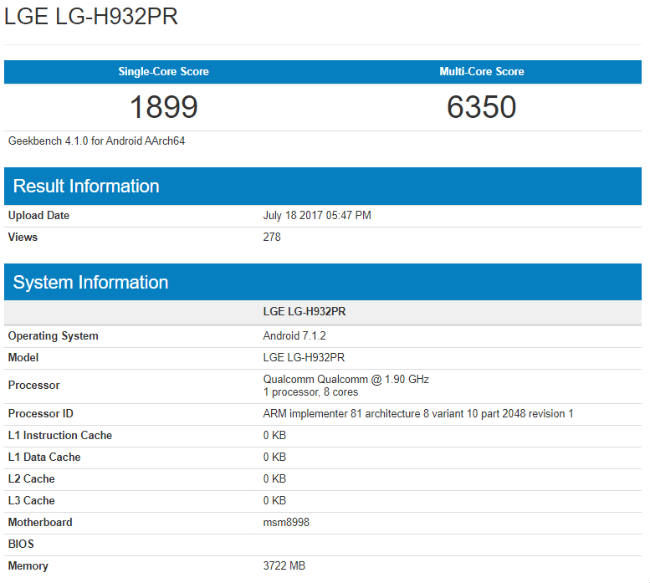 The combination of the Snapdragon 835 platform with 4GB of RAM is quite popular with flagship devices and is used by other manufacturers like the Samsung Galaxy S8 (US variant) and the HTC U11. However, other manufacturers have upped the RAM offered by their phones. The Xiaomi Mi 6 offers 6GB of RAM, while the OnePlus 5 offers up to 8GB of RAM on their phones. Even Samsung offers a 6GB RAM variant of the Galaxy S8+.