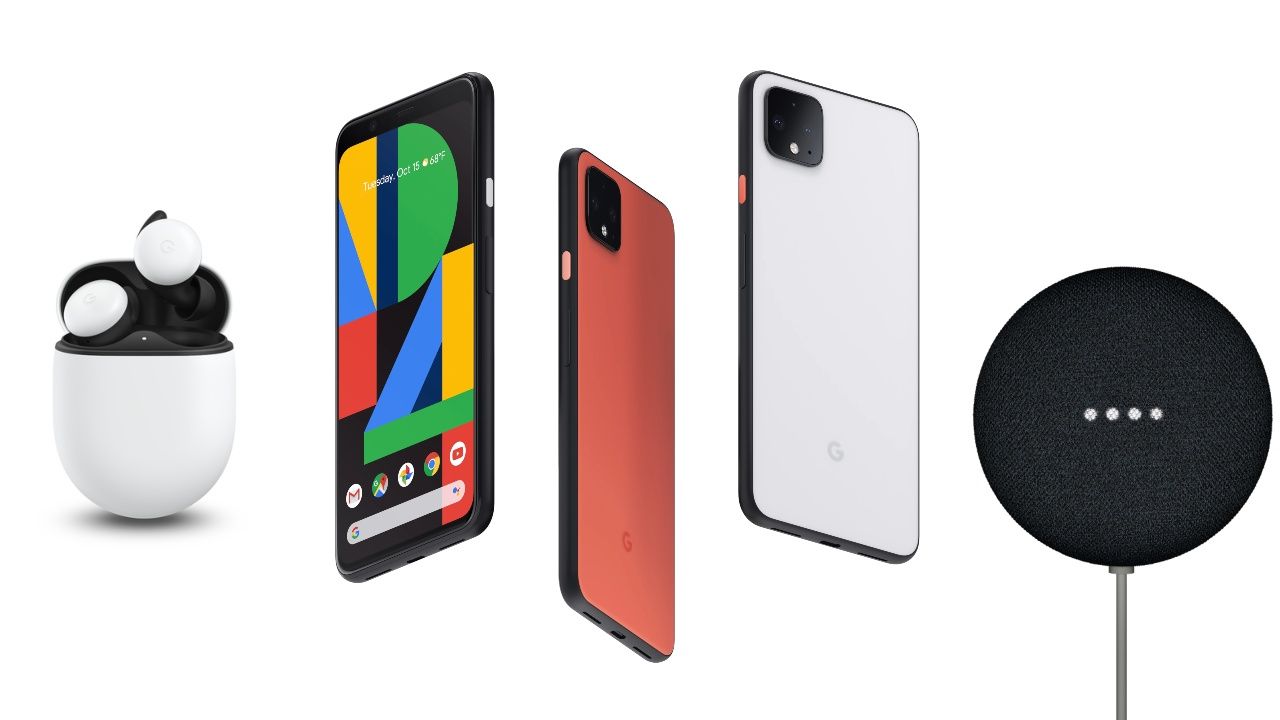 After numerous leaks, renders and reports, Google has finally made its Google Pixel 4 and Pixel 4 XL smartphone official. As expected, the new Google handsets are all about the upgraded camera setup, the new Soli radar chip and the 90Hz display. As always, the company had an elaborate presentation ready to explain and highlight every notable feature of the new phones. Alongside the new Pixel 4 series of handsets, the company also announced new truly wireless Pixel Buds, a new Nest Mini and more. Here’s everything you need to know.

Update: Google has confirmed to Digit that the Pixel 4 phones will not be launched in India. You can read all about this here.

As mentioned above, the Google Pixel 4 series of handsets are all about the camera, the new Soli radar chip and the 90Hz display. As always, the Pixel 4 and the Pixel 4 XL vary only in terms of the screen size while almost every other hardware remains the same. The Pixel 4 comes equipped with a 5.7-inch Full HD+ OLED display while the Pixel 4 XL gets a 6.3-inch QHD+ OLED panel. Both handsets feature a 19:9 display aspect ratio with a panel that has a refresh rate of 90Hz. The battery capacity differs as well, with the smaller version getting a 2800mAh battery and the Pixel 4XL being backed by a 3700mAh power pack. They both support ‘fast’ wireless charging, even though Google has not specified wattage on the phone’s product page.

Both Pixel 4 phones lose the dual-tone design for the rear panel as it is now replaced with a single slab of glass. The handset is water-resistant and supports Active Edge feature so that you can squeeze the phone for invoking the Google Assistant. Powered by the Snapdragon 855 SoC, both phones come equipped with 6GB RAM and options to select from 64GB or 128GB of internal storage. There’s also the Pixel Neural Core and Titan M security model on the devices.

The camera is the Pixel 4 series’ USP and this time, Google is embedding dual rear cameras on the handsets. There’s a 12.2 MP dual-pixel rear camera with f/1.7 aperture, AF with dual pixel phase detection and Optical and Electronic Image Stabilization. The sensor is supplemented by a 16MP telephoto camera that has f/2.4 aperture and all the same aforementioned additional features like AF, OIS and EIS. There’s also a Spectral + flicker sensor on the phones but Google didn’t elaborate on what it can do.

On the front, the two phones sport an 8MP wide-angle camera that has an f/2.0 aperture lens. However, alongside the camera, Google has embedded an NIR flood emitter and dot projector, along with two NIR cameras to enable better face detection for authentication. As per Google, the handsets feature the fastest face unlock on a smartphone, thanks to Motion Sense, which senses when the user is approaching the handset with the help of Soli Radar chip. The Pixel 4 and 4 XL come equipped with the Soli radar chip that enables Motion Sense, which is a set of features that can be used to skip songs, decline a call and much more. Google says all the data processed by the radar chip is stored on the phone and not sent back to any servers.

Coming to the additional camera features on the Pixel 4 lineup, there are four main options this time around. The Pixel 4 and 4 XL introduce live HDR+ with dual exposure controls learning-based white balance, wider range portrait mode and Night Sight with astrophotography. Google explained, in a quite detailed manner, about how it uses software to work around the limitations of smartphone photography. In addition, the new Pixel phones feature dual stereo speakers, USB-C audio, no headphone jack and run on Android 10.

Alongside the new Pixel smartphone lineup, Google also unveiled the new truly wireless Google Pixel Buds. The new earphones are touted to deliver good sound and come packed with features. As expected, the new cans enable hands-free access to Google Assistant, which can be used to send texts, get directions or use google translate. The new buds are also said to feature long-range Bluetooth connection that can connect with a device up to three rooms away when inside or across a football field when outside. This is similar to most Bluetooth headphones though. Additionally, the earphones are sweat and water-resistant.

As per Google, the new truly wireless Pixel Buds can deliver up to five hours of audio playback on a single charge and up to 24 hours with the wireless charging case. Rather than being wider, the carry case for the device is taller, similar to the Apple AirPods. The new Google Pixel Buds also come equipped with a Spatial Vent for picking up environment sound and enabling some level of awareness. It’s volume also dynamically adjusts, based on the ambient noise and it comes with beamforming mics that are said to pick up voice while on a call clearly. The Google Pixel Buds will be available in the US in 2020 for $179 (Rs 12,807 approx). It will be offered in Clearly White, Oh So Orange, Quite Mint and Almost Black colour options.

Google also announced its new 2nd generation Nest Mini, which looks the same as a regular Google Home. There are some improvements in the new device, like three far-field microphones instead of two and a port for wall hanging it. The Nest Mini comes in Chalk, Charcoal, Coral and Sky colour variants, and features the regular connectivity options like Wi-Fi and Bluetooth. There are touch-based controls on the device, along with a 15W power adapter. The audio of the new device is said to be better than its predecessor, with 2x bass and enhanced clarity.

As of writing the story, Digit received an update from Google confirming that the Google Pixel 4 series of handsets won't be sold in India. However, in the US, Pixel 4 is up for pre-order priced at $799 (Rs 57,000 approx). and the Pixel 4 XL is available at $899 (Rs 64,268 approx). In regions where it will be available, it will start shipping from October 24 in Clearly White, Just Black, and a limited edition, Oh So Orange colour models. As for the Google Pixel Buds and the 2nd gen Nest Mini, we don't know their India price and availability yet. However, the Pixel Buds will be available next year in the US for $179 (Rs 12,797 approx), while the Nest Mini is priced at $49 (Rs 3,503 approx). The Pixel Buds come in Clearly White, Oh So Orange, Quite Mint and Almost Black colour models, while the Nest Mini will be available in Chalk, Charcoal, Coral and a new Sky colour.

Google also announced the PixelBook Go laptop that runs on ChromeOS. You can read more about it here.