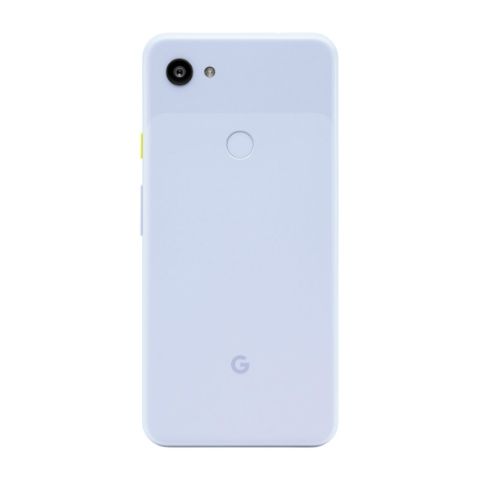 Google Pixel 3a spotted on Geekbench.

The listing hints at 4GB RAM and Android 9 Pie OS on the device.

The smartphone is expected to be unveiled on May 7 during the first day of Google I/O 2019.

Google is expected to announce two new smartphones, the Pixel 3a and 3a XL on the first day of Google I/O 2019. However, information regarding the two handsets has been leaking out rapidly ahead of the official reveal. Just recently, we came across two press renders of the Google Pixel 3a that showed off the phone in white and purple colour variants and now, the smartphone has popped up on Geekbench, where some additional information about it has been revealed. The listing suggests that the Pixel 3a is running Android 9 Pie with 4GB RAM. While the processor is not listed, the phone is speculated to be powered by the Snapdragon 670 platform.

The Pixel 3a managed to score 1625 and 5206 in single-core and multi-core Geekbench tests. This is lower than the 1805 and 5790 single and multi-core test numbers of the Pixel 3a XL, which is in line with the rumours that the Pixel 3a XL might come equipped with a more powerful Snapdragon 710 SoC, which is also paired with 4GB of RAM. While the new Geekbench listing doesn’t reveal more about the Pixel 3a, an earlier report suggests that the handset might come equipped with a 5.6-inch OLED display. On the other hand, the Pixel 3a XL is rumoured to sport a 6-inch OLED panel. The two phones are speculated to feature the headphone jack, which Google ditched with the Google Pixel 2 smartphones. 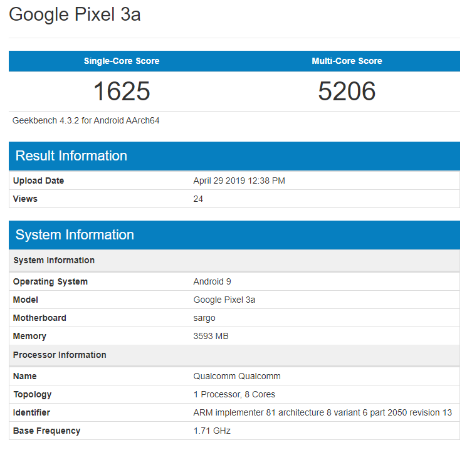 Previously leaked images of the Pixel 3a revealed the phone’s design in its entirety. If the renders are to be believed, the Pixel 3a could sport a design similar to the current Pixel 3. It’s seen with an 18:9 display aspect ratio and comes equipped with a single camera and dual-tone frosted glass on the back.

The fingerprint sensor is also present on the rear, along with the Google logo on the bottom. Renders showing off the device in white colour suggested that its power button could be in contrasting dark orange while it is bright yellow for the purple Google Pixel 3a. Additionally, both new renders of the device suugest May 7 as the set date, which is the first day of Google I/O 2019. This is speculated to be a hint of the date when the new phones could be announced.