The Google Pixel 3 XL Lite is listed on Geekbench with 1805 in single-core tests and 5790 in multi-core tests.

Additionally, the name of the phone, ‘Foxconn Pixel 3 XL’ suggests that the device is probably being assembled by Foxconn, which also assembles the standard Pixel 3 and Pixel 3 XL smartphones. The smartphone also managed to score 1805 in single-core tests and 5790 in multi-core tests. These scores are in the same range as other Snapdragon 710 powered phones like the Nokia 8.1 or the Oppo R17 Pro. While the Geekbench listing usually holds true in depicting the hardware a device might come packed with, the device that was benchmarked could very well be a prototype unit and the final device could be slightly different. 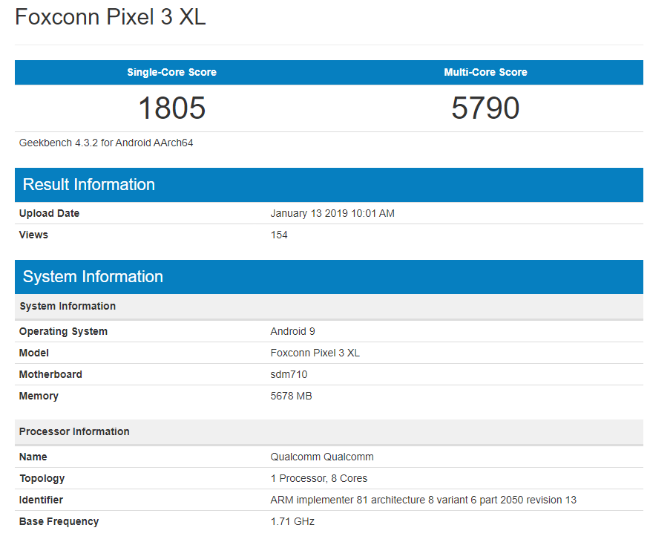 As per a previous report, Google could launch its  Pixel 3 Lite and the Pixel 3 XL Lite smartphones by Spring 2019 in the US. The two handsets are expected to come with a full HD+ resolution screen with an aspect ratio of 18.5:9. However, the Pixel 3 XL Lite could sport a 6-inch display as compared to Pixel 3 Lite’s 5.5-inch screen. None of the two devices are said to feature a notch and could be announced with a 3.5mm headphone jack. Both the Lite variants of the Pixel 3 are said to be available in only white and black colours.