Here’s how the iPhone SE 2020 stacks up against OnePlus 8 and Realme X50 Pro. 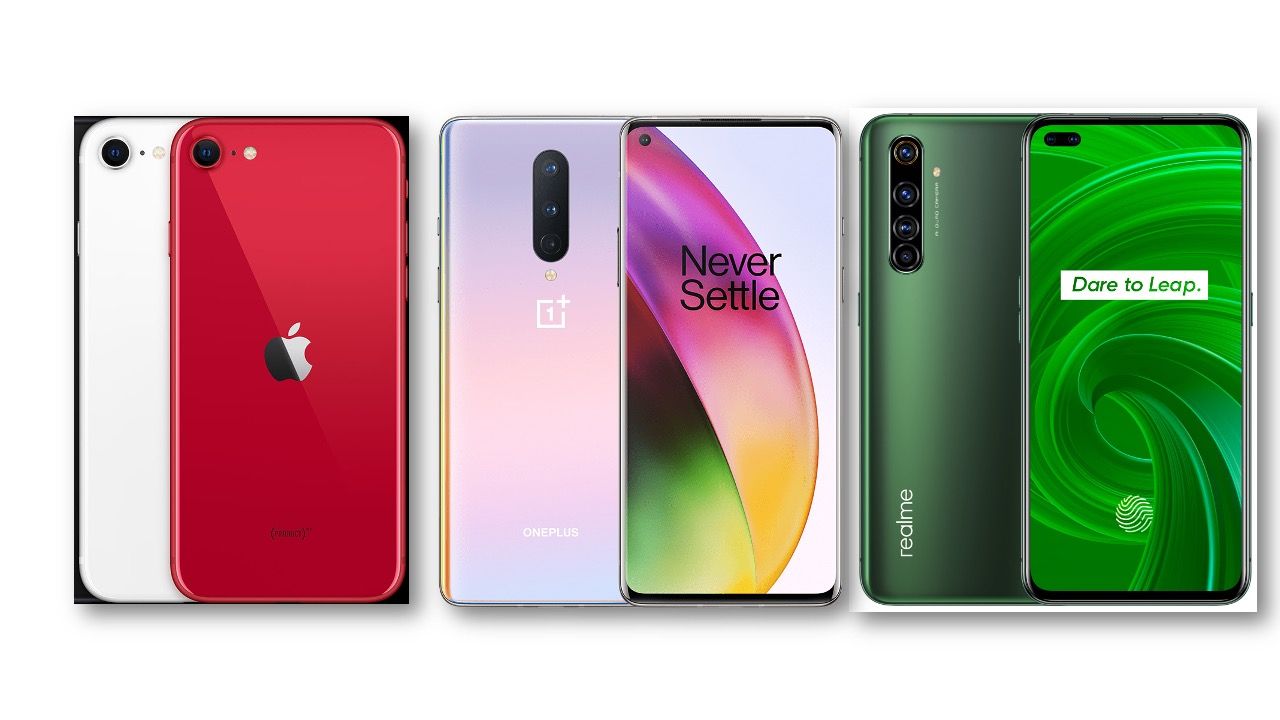 Apple finally launched a successor to the iPhone SE after nearly four years in the form of a revamped iPhone 8. Apple iPhone SE 2020, as the name suggests is the company’s budget smartphone for this year and comes just a day after OnePlus unveiled its flagship OnePlus 8 series globally on April 14. While the iPhone SE 2020 is priced starting from Rs 42,500 in India, OnePlus is yet to reveal the prices and has left it in the air for the time being as the country is under a total lockdown due to the Coronavirus outbreak. For the same reasons, Apple hasn’t revealed as to when the latest iPhone SE will go on sale in India.

The iPhone SE 2020 is a mix of features from the iPhone 8 and the company’s latest flagship, the iPhone 11 Pro, while the OnePlus 8 represents the best of the Android world, packed with the latest Qualcomm chipset with 5G support and fluid OxygenOS to boot. In India, Realme got the first movers by releasing the first 5G phone, X50 Pro in the country, even though the network hasn’t been deployed yet. Nevertheless, it exists and is a part of this comparison.

Here’s how the iPhone SE 2020 stands against OnePlus 8 and Realme X50 Pro.

Apple iPhone SE 2020 has a glass-aluminium build and is 7.3mm at its thickest point, weighing in at 148 grams. It is IP67 certified which makes it resistant to dust and water. OnePlus 8 has a metal-glass sandwich design that’s more in trend these days and is 8mm thick, weighing in at 180 grams. It’s IP68 rated and can withstand dust and water ingress. The Realme X50 Pro also has a metal-glass build but has a larger footprint measuring 8.9mm is the heaviest of the lot at 205 grams.

Out of the three phones, OnePlus 8 has the biggest display while the iPhone SE 2020 is more compact, lightweight and likely more durable.

Apple iPhone SE 2020 is powered by the latest A13 Bionic chip that’s miles ahead of any chipset as the company is known to optimize its phone in such a manner that efficiency takes the front pedal. Having said that, OnePlus is also known, amongst Android users, as the company that provides the best vanilla experience with its phones and the latest OnePlus 8 is powered by top-of-the-line Snapdragon 865 chip with 5G support baked in.

Apple uses the same chip with the SE 2020 as on its current crop of flagship phones, the iPhone 11 Pro. So the general performance is expected to be smooth and playing games like PUBG Mobile shouldn’t be an issue at all. The phone has 3GB of RAM and is offered in three storage variants-- 64GB/128GB/256GB. It runs on iOS13 and will most likely be upgradeable to iOS14 when it’s out and about.

OnePlus 8 and Realme X50 Pro are both powered by Snapdragon 865 chipset and come with 5G support paired with upto 12GB RAM and 256GB storage options to choose from. OnePlus 8 runs on OxygenOS 10 while the Realme X50 Pro runs on RealmeUI 1.0 that’s based on Android 10.

The general performance of Android and iOS differs by leaps and bounds which is why as a system such as the former requires more memory to function smoothly whereas Apple optimizes its iOS in a way that it’s powerful but efficient as well.

Coming to the cameras, the iPhone SE 2020 has a single 12MP camera with f/1.8 aperture and supports OIS. The camera is capable of recording in 4K UHD at upto 60fps and slow-motion video at upto 240fps. On the front, there’s a 7MP selfie camera that can record 1080p videos at 30fps supported by EIS.

OnePlus 8 has a triple camera setup on the back that consists of a primary 48MP sensor with an f/1.8 aperture, a 16MP ultra-wide camera and a 2MP macro sensor. On the front, there’s a 16MP camera housed within the punch-hole notch cutout. The cameras can record videos in 4K UHD at upto 60fps with support from OIS and EIS.

Realme X50 Pro comes with a quad-camera setup that consists of a primary 64MP sensor with f/1.8 aperture, a secondary 12MP telephoto lens, an 8MP ultra-wide lens and a 2MP depth sensor. It can record videos in 4K at 30fps and has support for EIS.

All three phones come with the basic set of connectivity features including WiFi 6, Bluetooth, Lightning connector with iPhone and Type-C with OnePlus 8 and X50 Pro.

Apple iPhone comes with the same battery as previously on the iPhone 8 and while the company isn’t known to reveal the specifications, it says that you can watch 13 hours of videos on a single charge. The phone supports wireless charging as well as 18W fast wired charging. The iPhone SE 2020 is also compatible with all Qi-certified chargers.