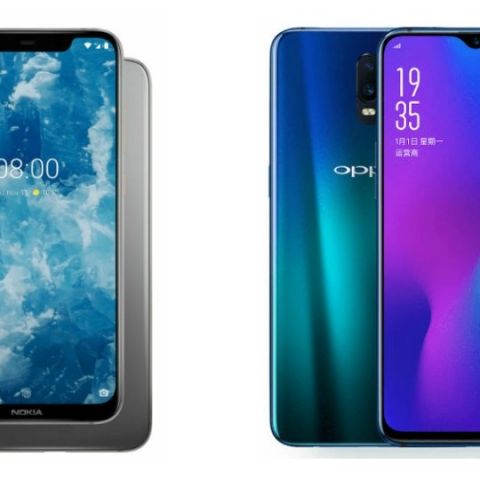 The Nokia 8.1 has recently revealed at an event in Dubai on December 5. The smartphone has launched with Snapdragon 710 processor with a dual rear camera setup. The phone is expected to appear in India on December 10 at an event, which is going to held in New Delhi. On the other side, the Oppo R17 Pro is the latest mid-range flagship device by the Chinese company that comes with the latest Qualcomm Snapdragon 845 processor. It would be interesting to see how the Nokia 8.1 fares against the Oppo R17 Pro in terms of specifications.

The Nokia 8.1 sports a 6.18-inch full HD+ edge-to-edge display that comes with Pure display technology. It has a traditional rectangular notch on top of it, which houses the front-facing camera and a speaker.

The Oppo R17 Pro features a slightly bigger display in comparison to the Nokia 8.1 as it comes with a 6.4-inch display that offers a resolution of 2340 x 1080 pixels. The smartphone comes with a smaller water-drop notch on the top, which almost makes this smartphone bezel-less.

The Nokia 8.1 features a dual 12MP + 13MP AI-powered rear camera that allows you to take portrait photos with studio-style lighting. Both the cameras support optical image stabilization and come with the famous Bokeh effect. At the front, the smartphone has a 20MP sensor.

The Oppo R17 Pro has a triple camera setup the back, which is also the highlight of this smartphone. It has a 12MP primary camera, 20MP secondary camera and a third one is the TOF sensor, which is a 3D imaging technology that can be used for mapping objects accurately. At the front, it has a 25MP sensor that lets you take portrait photos as well.

The Nokia 8.1 is among the first few phones in the world, which comes with a Qualcomm Snapdragon 710 octa-core processor. The smartphone packs 4GB RAM and 64GB internal memory, which is expandable up to 400GB via a microSD card.

On the other hand, the Oppo R17 Pro is backed by the latest Qualcomm Snapdragon 845 processor, which is paired with 8GB RAM and 128GB internal memory. One should keep in mind that the phone does not offer expandable storage, which can be a disappointment for some of you.

The Nokia 8.1 packs a 3,500mAH battery with 18W fast charging support. According to the company, the battery can last for up to 2 days.

The Oppo R17 Pro is backed by a 3,700mAH battery, which according to the company can last for one day. It comes with the company’s Super Vooc fast charging technology that can charge your phone to up to 50 percent within 15 minutes approximately.