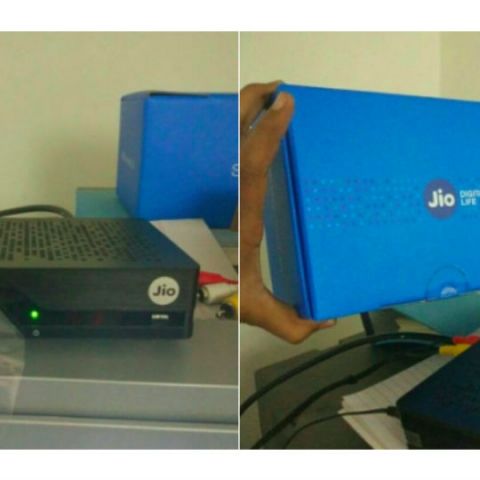 Information circulating the Internet suggests that Reliance Jio Infocomm is working on a set top box service in cities like Mumbai, Pune and Chennai

Images of a Reliance Jio set top box has leaked online suggesting that the company will enter the set-top box space soon. The leaked set-top box has a rectangular design much like existing set top boxes and also has a USB port in the front.

The leaked images show blue box with Reliance Jio branding on it. Apart from the front facing USB port the set top box will come with a standard slew of connectivity options such as HDMI and audio-video output. The device is also expected to have an ethernet port.

Information circulating the Internet also suggests that the JioTV will offer more than 360 channels, of which at least 50 will be in HD. There will be a seven-day ‘catch up’ option too which, as the name suggests will let users watch a week old content. Unlike the recording feature offered on some set top boxes, this content isn’t stored locally but on Jio’s servers and puld as per user's requirement. It is also expected that the device will launch with voice recognition to control channels. How this will work is yet to be seen. We have seen similar functionality in Android enabled TV’s and it works quite well for Android. On other services like the Xbox Kinect, the Indian voice accent recognition isn’t great.