OnePlus 6 global launch set for May 16, India launch on May 17 with sales starting from May 21

OnePlus India has finally confirmed the launch date of their next flagship smartphone and it is way sooner than latest rumours had suggested. Amazon Prime members in India will get exclusive early sale access for the phone at 12PM on May 21 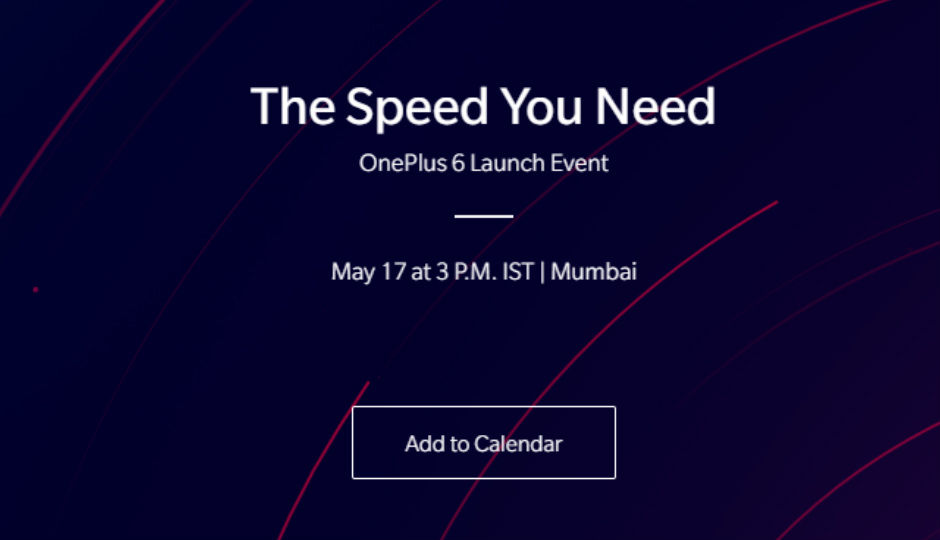 OnePlus 6 global launch set for May 16, India launch on May 17 with sales starting from May 21

After many rumoured dates for the launch of the OnePlus 6, the company has officially announced that they will be launching their next flagship globally on May 16 and in India on May 17 at an event to be hosted in Mumbai. Finally, OnePlus fans can set their countdown timers for the release of the next smartphone from the Chinese company. The ‘Notify me’ page for the OnePlus 6 is live on amazon.in. Amazon Prime members will get the advantage of Prime Early Access where they will get the first opportunity to purchase the OnePlus 6 in an exclusive sale beginning at 12:00PM IST on May 21, 2018.

The OnePlus 6 has been subject to innumerable leaks and rumours, but of everything, there are a few things we know for sure thanks to various posts by company founders Pete Lau and Carl Pei in the OnePlus forums. We know that OnePlus 6 will be all about speed, unlike the OnePlus 5, for which the company focused on the imaging aspect of the device.  For this, the company has gone with the Qualcomm Snapdragon 845 paired with up to 8GB of RAM. This year, customers will also have the option to buy a 256GB storage variant of the phone, but there will still be no microSD card slot. We also know that the company will stick to an 18:9 display, this time, introducing the Notch. The company had posted on their forums on how the Notch was here to stay, ruling out any possibility of a notch-free display.

Things seem to have also evolved in terms of design. OnePlus has confirmed the use of glass as a construction material bringing the company a long way from its initial sandblasted finish days. The choice of glass seems to imply that OnePlus may finally integrate wireless charging into their phones, a feature that fans have long asked for, but could not be provided due to the metal construction of the phone. This time, OnePlus also seems to have worked on the water and dust sealing on their new flagship, with posts suggesting the OnePlus 6 will have an IP67 rating.

The other notable change to the design is to the way the camera assembly is arranged. On the OnePlus 5 and OnePlus 5T the camera units were aligned horizontally on the top edge, this time, the camera will be aligned vertically in the centre of the smartphone as suggested by numerous leaks and rumours. The fingerprint scanner also seems to be placed on the back for the OnePlus 6, but this is a detail we will only find out once the phone is officially announced on May 16.

Your #OnePlus6 is coming soon!