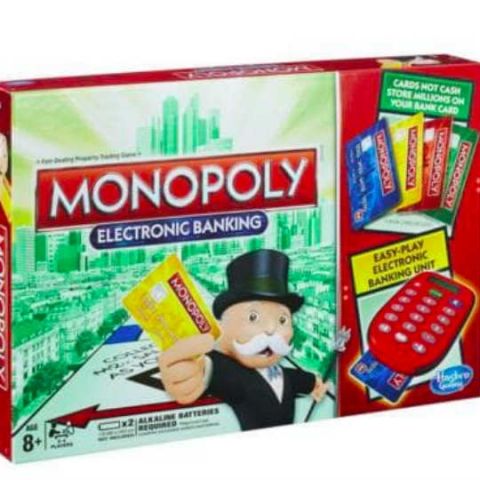 India’s drive to move towards a cashless economy has inspired Hasbro, the American toy and board game company. In an announcement on YouTube yesterday, Hasbro announced an electronic banking edition of its hit board game Monopoly. In the new version, the company replaces the traditional bank notes with debit cards and swipe machines. So, instead of counting out the cash each time you have to pay rent, you simply swipe the card.

Hasbro has introduced four coloured cards for players to use. Furthermore, if you have an older version of Monopoly already, you can avail a cash discount on Monopoly Electronic Banking. For this, you need to head over to this website. You can use an Amazon promo code or go to known toy stores. The cash discount amounts to Rs. 100, for exchanging the bank notes in your current monopoly game.

The other elements of Monopoly remain the same. The electronic version has 28 Title Deed Cards, 16 Chance Cards, 16 Community Chest Cards, 12 hotels, 32 houses, 1 Electronic Banking Unit, two dice and four Electronic Banking Cards. The game is meant for eight to 10 year olds, but as anyone familiar with Monopoly will tell you, it’s truly fun for all ages.

The current price of Monopoly Electronic Banking on Amazon India is Rs. 1531, although the Hasbro’s pricing is Rs. 1799.