Harvard’s School of Engineering and Applied Sciences (SEAS) has come up with a flat silicon-based lens that can focus light without any distortion or optical aberrations, such as those found with even the best made curved glass lenses. 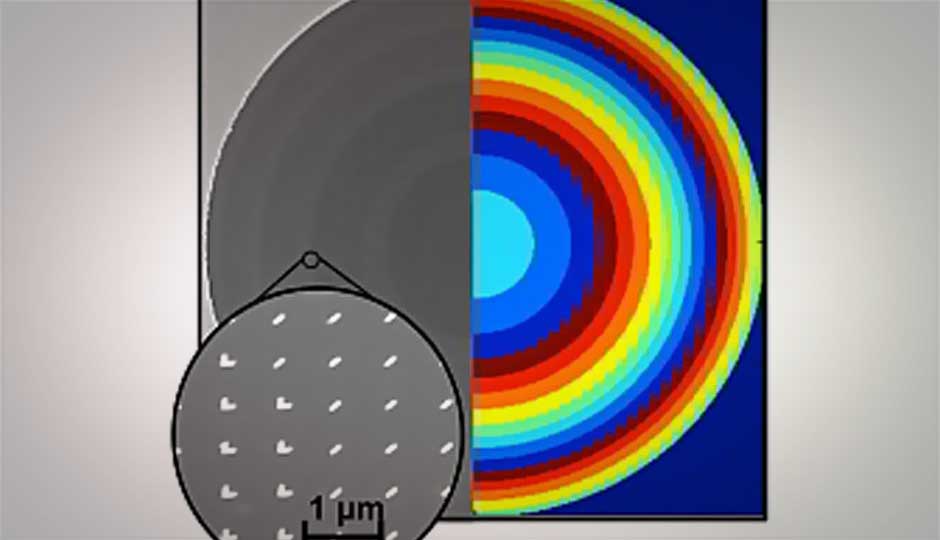 Harvard’s School of Engineering and Applied Sciences (SEAS) has come up with a flat silicon-based lens that can focus light without any distortion or optical aberrations, such as those found with even the best made curved glass lenses.

The team of researchers at Harvard have developed an ultrathin (60 nanometer), flat lens, built out of silicon wafer and coated with nanometer-thin layers of gold. These layers are partially stripped, leaving behind V-shaped structures or ‘nanoantennas’ for incoming light, capturing it and holding it before releasing it. This design avoids the phase delays that thicker, glass lenses are prone too, by phase shifting the light to the surface of the lens.

The gold-and-silicon lens creates a “perfect image” without any distortion, and can be used on more than just visible light – it works on frequencies ranging from near-infrared (with wavelengths just smaller than visible light) to the difficult to measure and modulate terahertz radiation (with wavelengths just larger than microwaves) or, EM radiation with wavelengths falling roughly between 2 microns and 1 millimetre. Adjusting the angle, spacing and size of the nanoantennas, or the ‘metasurface’ of the lens, will allow it to be tuned for different spectrums of radiation.

Principal investigator Federico Capasso, the Robert L. Wallace Professor of Applied Physics and Vinton Hayes Senior Research Fellow in Electrical Engineering at SEAS, spoke of the new type of lens, saying: “Our flat lens opens up a new type of technology. We’re presenting a new way of making lenses. Instead of creating phase delays as light propagates through the thickness of the material, you can create an instantaneous phase shift right at the surface of the lens.”

Francesco Aieta, lead author, and visiting graduate student from the Università Politecnica delle Marche in Italy, added: “In the future we can potentially replace all the bulk components in the majority of optical systems with just flat surfaces. It certainly captures the imagination.”

A micrograph of the flat lens (diameter approximately 1 mm) made of silicon. The surface is coated with concentric rings of gold optical nanoantennas (inset) which impart different delays to the light traversing the lens. Right:The colored rings show the magnitude of the phase delay corresponding to each ring. (Image courtesy of Francesco Aieta.)