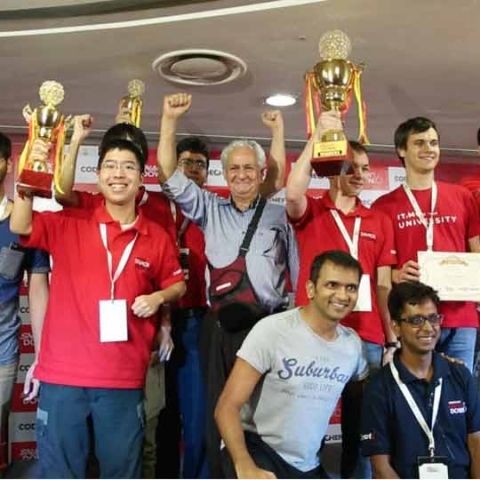 Codechef, Directi’s Non-profit educational initiative, successfully concluded the finals of the 2016 edition of Snackdown, an annual global multi-round competitive programming competition in July with India's best 25 teams competing against the world's best 25 best teams in Mumbai. The finale saw teams from some of the top schools, universities and corporate organisations from across the world compete in a 5 hour long programming battle at Directiplex, Mumbai with Gennady Korotkevich and Borys Minaiev of ITMO University, St Petersburg, Russia winning the title of “Snackdown 2016 Champions” and a prize of $10,000. 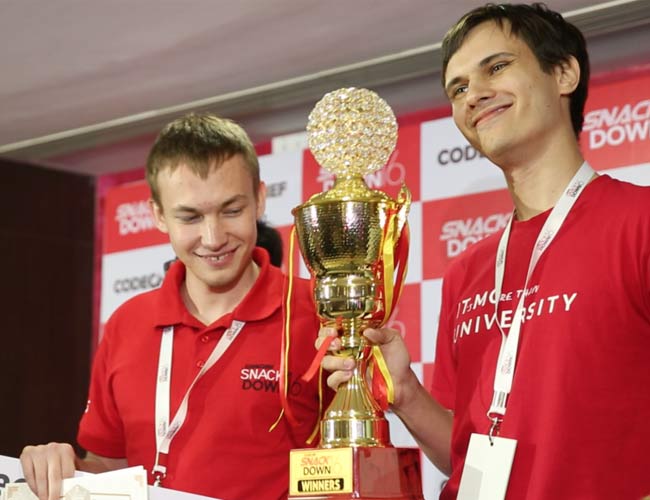 Gennady Korotkevich (right) and Borys Minaiev (left) with their prize The second place was secured by Iya Zban and Belonogov Ivan also from ITMO University, while the third place belonged to Ken Sugimori and Kohji Liu from University of Tokyo, Japan. Their prizes were $5000 and $3000 respectively. The best Indian team at the competition was from IIT Indore and comprised of Aditya Shah and Utkarsh Saxena. They were awarded a prize of $2000 and the 16th overall rank in the competition.

The event also saw a host of eminent speakers from the world of Indian programming and computer science. Former Codechef and Snackdown members were also present in various roles, most of all to encourage the participants. Mr. Bhavin Turakhia, co-founder and CEO, Directi, along with Anup Kalbalia, BU Head, Codechef, announced the winners and handed out the prizes. Mementos and prizes were also given to every participant as well as the eminent guests.

Bhavin Turakhia, CEO and Co-Founder of Directi concluded the event, saying, “I’m mind blown by the amazing talent we have over here. Over thirteen thousand teams from all across India and outside the country participated in the contest, out of which we flew down the top teams for the finale to declare the best programming team in the world. It’s an enriching experience to meet the finest coders of the world and interact with them. These are the best programming minds in the country and across the globe. I see in them, potential entrepreneurs, some amazing developers who are about to make some amazing products and change people’s lives. Undoubtedly, the future lies in their hands and I thank everyone for joining us. This was great.”

This event marks a milestone in Indian competitive programming with the best in India getting an opportunity to interact with the best from around the world. The new perspective along with the experience is sure to guide the Indian programmers to greater heights.

Stay tuned to our YouTube channel for videos from the event.