An 'unmanned' Tesla Model S apparently knocked over a robot and killed it, or did it?

Follow Us
HIGHLIGHTS
An 'unmanned' Tesla Model S apparently knocked over a robot and killed it, or did it?

It seemed like just an ordinary day at CES 2019. People were milling about. Products were being launched. New technologies were unveiled. But for one innocent robot, it would turn out to be the last day of its existence... Probably.

According to a release shared by Promobot, a robot manufactured by the company was hit by an “unmanned” Tesla and was knocked over. This resulted in the robot suffering “critical damage.” According to Promobot’s statement, “the accident happened at a time when the engineers of Promobot, a participant of the exhibition, were carrying out the transportation of robots to the exhibition pavilion. During the movement, one of the robots drove into the roadway, and then was hit by a Tesla car.” The company has also shared a video that shows the crime in action.

So, it seems like a pretty open and shut case doesn’t it? We have video evidence that proves that an unmanned Tesla Model S hit an innocent robot who was minding its own business and killed it. Not only that, but it continued to drive away. Not even stopping to check its victim or exchange insurance information. Pretty straightforward right... Or is it?

It all seem a little too convenient if you ask us. The camera just happened to be there, and doesn’t seem to be your regular security camera (lack of timestamps or watermarks). The robot was left unattended and alone on the side of the road (there have been instances of theft at CES before). And if you look at the ‘video evidence’ once more. It seems like the robot fell over a bit too easily if you ask us, as if it just toppled over with the faintest of brushes from the Tesla car. The physics of it seem a bit off. Either the Promobot Robot was really lightweight, or was pulled down with the help of a rope. Hmmm… speaking of which. What do we see on the left of the frame around the 0:06 mark in the video. 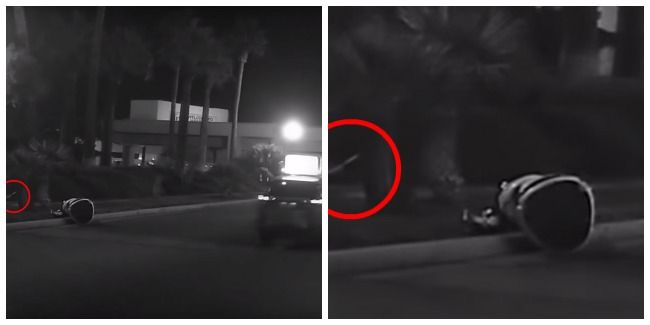 Is that a rope that slithers away quickly after the robot gets knocked down? It should also be noted that Tesla really doesn’t have an ‘unmanned’ mode as such. It has a feature called autopilot, but in its current stage, it isn’t really autonomous.

Many commenters of YouTube have spotted the same and have called out the company for trying to pull off such a PR stunt. So, is this a case of one company trying to frame Tesla for roboslaughter, or (as YouTuber 'The 225677th Fragment of the Man-Emperor of Mankind' puts it) the first case of Autobot vs Terminator? We’ll just have to wait and see. For now, all we know is that a robot is dead and is own its way to the great mechanic in the sky.

...the company will probably just rebuild it. No biggie.