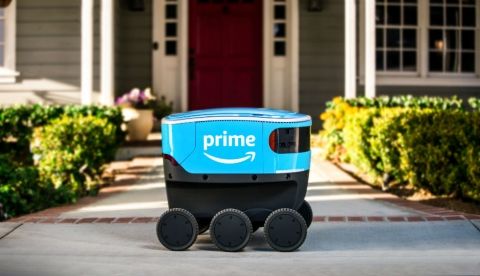 Amazon has announced that Amazon Scout, its robot that is specially designed to safely get packages to customers using autonomous delivery devices, has started delivering packages to customers in a neighbourhood in Snohomish County, Washington. Amazon says that it is starting with six Amazon Scout devices that will deliver packages from Monday through Friday during daylight hours.

“The devices will autonomously follow their delivery route but will initially be accompanied by an Amazon employee. We developed Amazon Scout at our research and development lab in Seattle, ensuring the devices can safely and efficiently navigate around pets, pedestrians and anything else in their path,” Sean Scott, Vice President of Amazon Scout, said in a blogpost.

Amazon says that its customers in Snohomish County should order just as they normally do and their Amazon packages will be delivered either by one of its partner carriers or by Amazon Scout. Customers can shop on the Amazon App or amazon.com and enjoy the same delivery options including fast, FREE Same-Day, One-Day and Two-Day shipping for Prime members, the company executive noted.

Amazon has been working for years to make regular deliveries by drones a reality. During the testing process, its drone made the first delivery on December 7, 2016. Called the Prime Air, it is a delivery system from Amazon designed to safely get packages to customers in 30 minutes or less using unmanned aerial vehicles. Amazon says that the Prime Air has great potential to enhance the services it already provides to its customers.