Update: 22 September 2020, 9:45 AM: As of writing this update, the pre-orders for the Xbox Series X and Series S are live only on Reliance Digital. While there is a listing page on Flipkart highlighting the features, further clicking through leads to a page which has the current gen Xbox One S listed for purchase. Searching on Amazon for the Xbox Series X or the S has yielded no result. Even clicking on "Find a retailer" on Microsoft's Xbox India page doesn't redirect. The only retailer which has the pre-order listed on its website is reliance Digital. On Reliance Digital, there are EMI options for both the consoles, along with offers such as 5% cashback on CITI and ICICI Bank Credit Cards EMI Transactions, and Get 5% cashback up to Rs 1500 on RBL Bank Credit Card EMI transactions. We will update this story when the pre-orders for the Xbox Series S and X go live on Amazon and Flipkart. 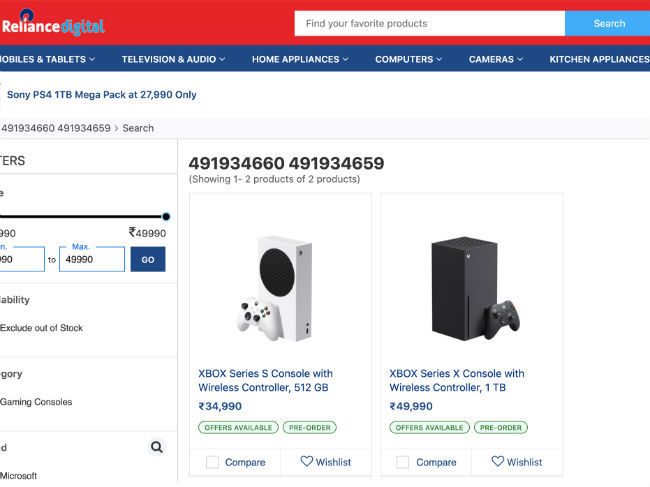 Original Story: Pre-orders for the Xbox Series X and Series S go live in India tomorrow, September 22 at 9 AM in India. Those interested will be able to preorder the console on Flipkart, Amazon and Reliance Digital’s online store. The console will be available in India along with the rest of the world on November 10. As for the pricing, the Xbox Series X is priced at Rs 49,990 while the Series S is priced at Rs 34,990. While the pricing of the console is considerably higher than its international pricing that is due to the high duties applied to the consoles.

To make the new consoles more affordable, Microsoft has a program called Xbox All Access in 12 countries, sadly India isn’t one of them. Xbox All Access is like an EMI program where a consumer pays a certain amount of money per month for 2 years and gets access to the console along with a subscription of Game Pass Ultimate for the duration. This is explaining it simply, of course.

In India, it isn’t clear whether there will be a trade-in option for your current Xbox console. However, Amazon and Flipkart do have no-cost EMI options from certain credit cards and financial services and we will know more about this tomorrow when pre-orders for the Xbox Series X and Series S go live.

It is nice to see Microsoft launch the console in India in tandem with the world. Sony, on the other hand, has said that the PS5 will launch in India on November 19, but there is no official word on the India price of the console or the pre-order dates.