It has been a while since Samsung launched new fitness trackers in the market. The last one that pops into my mind is the Gear Fit2 Pro which was launched back in 2017. However it looks like Samsung is making up for lost time by launching three new fitness wearables, the Galaxy Watch Active, Galaxy Fit and Galaxy Fit e.

The Galaxy Watch Active is the most premium of the lot and features a host of features that one might expect from a tracker priced at Rs 19,990. The device features a premium build with a metal case. The device is also reasonably slim and lightweight. The most notable design change between this watch, and its Gear S-series predecessors is the lack of a rotating bezel. I personally thought that the bezel helped the watch to look a lot more rugged. However, the company notes that the Galaxy Watch Active is water resistant up to 5ATM, and has passed the MIL-STD 810G rating. So it should be tough enough for any bumps and scrapes of the daily grind. The lack of bezel also helps to reduce a bit of weight, which is always a good thing.

The most eye catching feature of the wearable was it's display though. The device sports a large circular AMOLED display that is vibrant and colourful. The display is also pretty bright, and seems to work well in direct sunlight. As far as the UI goes, the phone uses Tizen, which was also found in its older wearables. Since the Watch Active does not come with the rotating bezel found in the older smartwatches, users will have to rely on swipes and taps in order to navigate the watch. To be honest, the rotating bezel was a very intuitive way of navigating the UI and this shows with the fact that some of the icons are a little too small to tap accurately. 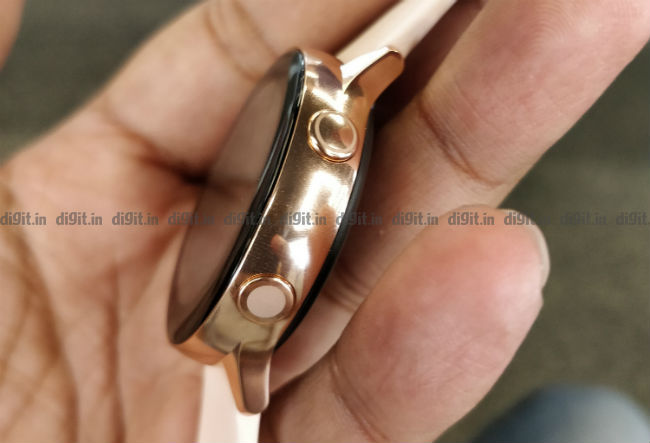 As far as the straps go, Samsung noted that the device is compatible with any 20mm straps that you might find in the market. This is a good thing for two reasons. First off, you can get a replacement strap easily from any watch store. The second reason why it's a good thing is because I personally did not like the strap buckle design. Unlike most straps, which go through a loop after passing through the buckle, Samsung’s design makes the strap pass through a cavity on the other end, which then rubs against your skin. This makes it a little tricky to wear at times. However, what this setup does is make it much neater, which can be helpful as there isn’t a dangling strap that might get caught somewhere as you workout. As far as fitness goes, Samsung notes that the device is capable of continuous heart rate monitoring as well as auto-detecting runs, biking, rowing, elliptical machines, which is very good. Users can also manually engage a bunch of activities. During the short time I have had with the Watch Active, the device was able to automatically recognise when I was walking and the step count seemed pretty accurate as well. The watch is also able to automatically pause, if it detects a lack of movement. It should be noted that the Watch Active comes with a built-in GPS for more accurate tracking. We’ll see how well the device is at tracking during our full review. The company also noted that the device will offer support for Bixby, so users should have a bunch of features such as responding to messages. During the short time I had with the device, you can ask Bixby to make calls, but it then directs you to check your phone. There is no option to pick up a call from the watch, but you can cut it. Bixby can also be used for other tasks, but her voice recognition capabilities were a bit of a hit of miss. You have to enunciate your words properly, otherwise, Bixby doesn’t understand you. This was harder than it seems, as the assistant seemed to have a little trouble understanding my English, which has a tinge of the Indian accent. Thankfully, the quick reply options are context sensitive and usually tends offer an apt response.

At a price point of Rs 19,990, the Samsung Galaxy Watch Active sits right in between the Fitbit Versa and the Fitbit Ionic, two very capable device in their own right. Not only do both these devices offer a similar experience to the Watch Active, but the Versa is currently available for a bit less than the same price. However, Samsung’s device offers a built-in GPS, which is available in Ionic, which in turn is priced slightly higher than the Watch Active. This makes the new device a very interesting proposition. Wait for our full review to learn whether the Samsung Galaxy Watch Active is up to par with the Fitbit devices, or better.